To quickly discover what a new fixed spool reel is capable of, take it out on a boat and knock seven fishing bells out of the thing. If it comes through unscathed then it will breeze anything likely to be encountered from the shore, says merciless Les McBride. Find out how the Grauvell Delphos BR-Z3500 fixed spool stood up to this extreme initiation.

Fixed spool reels are becoming much more vogue and commonplace on beaches and boats, so much so that multipliers often find themselves outnumbered in group situations. This once widely maligned style of reel offers very desirable trouble-free operation, with many now built to last and more able to withstand the harshness of the sea. Clean ground surf fishing, light close-in shore work, deep water spinning from rocks and any float work are well served by a fixed spool reel, and it easy to appreciate why most stalwart multiplier users now also pack a fixed spool of some description. 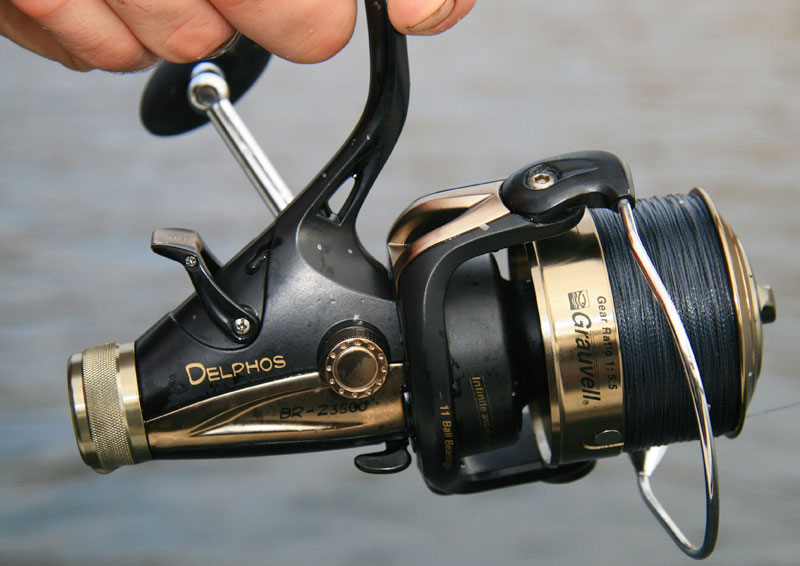 Boat anglers are also turning to fixed spools in numbers, and in my opinion there is no sterner test for such a reel than to work it afloat. I often gauge a fixed spool’s robustness and limitations by using it in boat fishing situations. My thinking is that if it comes through some tough bouts of boat fishing unscathed, then it will breeze just about anything that the shore can throw at it. And the Grauvell Delphos BR-Z3500 bait-runner type fixed spool reel would receive just such an initiation.

The smart black and gold liveried Delphos would be described as a medium sized reel that looks suitable for light shore work on a bass rod, spinning, plugging or float fishing. It is a noticeably solid feeling reel that’s considerably heavier than similar hugely popular Shimano reels. An identical spare spool is supplied. Stated line capacities relate to nylon, but I found I could spool up 300 yards of 30lb braid with little backing required. 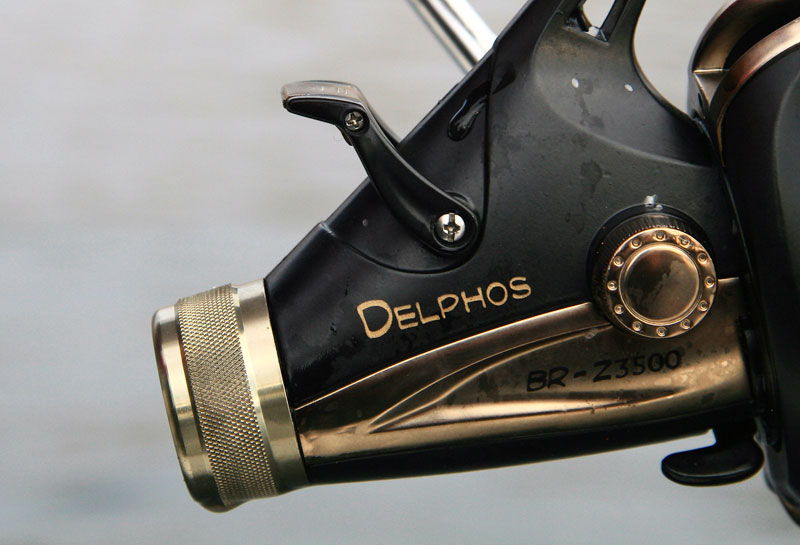 The Delphos has a front drag, which is preferable to rear drags for sea fishing as increased surface contact area provides a smoother, less jerky flow of line to a fighting fish. Front drags are also stronger as a rule for the same reason. The bait-runner switch lever is well sited on the top of the reel body in front of the tension adjustment control. Bait-runner operation is smooth with no hint of switch stutter or stiffness. Free spool operation is achieved with a reassuring ‘clunk’, while clean disengagement can be actioned manually, or automatically with an uninterrupted turn of the handle. 11 ball bearings are largely responsible for beautifully smooth and clean operation, while the infinite anti-reverse and balanced rotor further enhance the a silky feel in keeping with reels of twice the price or more. 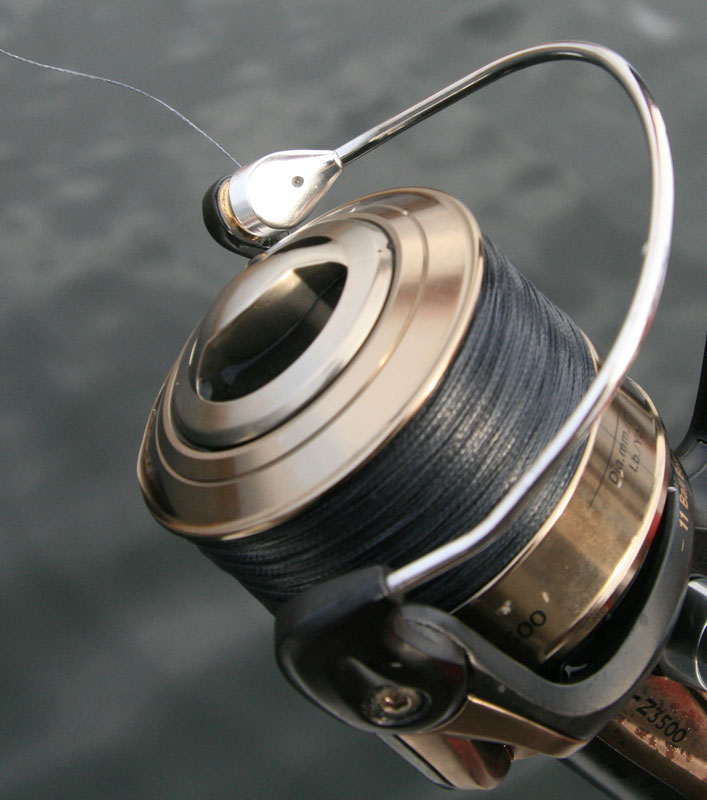 I was fishing for codling and pollack off Dunbar on Scotland’s east coast, using a 1 oz leadhead baited with ragworm. The Delphos was matched with a Teklon 270 boat rod, which seemed an ideal and balanced pairing. I took several fish without incident but soon encountered an annoying issue with the 30lb braided line apparently ‘hoovering’ underneath the spool and garrotting the spindle. I put it down to bad luck and inattention the first time it happened, but I began to ask questions when it happened repeatedly.

Such as this can often occur if the spool is overloaded with line, or as a result of freshly loaded braid that hasn’t had time to bed correctly, or if spilling out excessive amounts of loose braid in windy conditions. None of these possible explanations was the whole case here.

The light leadhead was an issue as there was little tidal pull to tow the line away and maintain line tension, therefore any lapse in concentration would allow an amount to slack line to play frustrating havoc below the spool. Skirted spools on fixed spool reels are designed to prevent such problems, but this is only a failsafe if the tolerance between the spool and rotor head that accommodate it are tight. In particularly large fixed spools, this is a difficult thing to achieve; manufacturers therefore often build in rubber or metal guards that prevent this from happening. The Delphos unfortunately has no such safeguard to counter what is a considerable void between the spool and rotor. 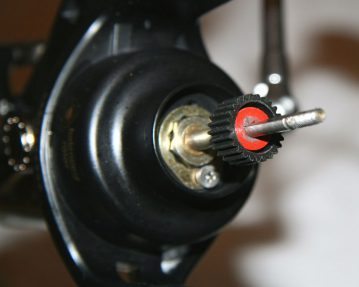 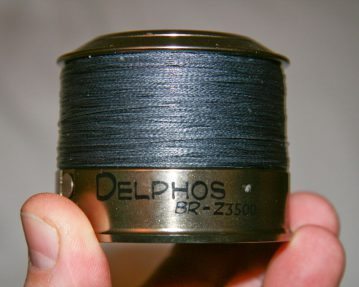 Changing to rig carrying 4oz of lead immediately stopped the line being sucked to merry hell below the spool, but I strongly advise deliberately under-filling the spool or perhaps sticking to a normal diameter mono line of not less than 12lbs to prevent rotor strangulation and to get the best out of an otherwise excellent reel.

Codling and pollack to 4lb could hardly be construed as hard fighting fish but they gave a fine indication of how smooth the lightly set drag was. Drag tension is easily adjusted via the front control. And a couple of quick turns lock the spool down hard so that if you were somehow inclined to wrap the braid around your hand and pull hard, it would bite deeply into flesh causing a nasty injury. Unlike many inexpensive fixed spools drag adjustment is properly incremental and tension can be finely tuned … this is a far cry from my last similarly sized and priced FS reel which had drag settings of full or off regardless of continually ratcheting the tensioner to try and find any setting in between!

A trip to a local reservoir for pike was meant to better test the bait-runner feature. Although the runner clicks on and off nicely the tension knob doesn’t seem to make any difference to the tension on the spool. There is no +/- direction indicator marked in the vicinity of the knob. I only made three casts all day with a largish dead-bait, and this time the under-spool line choke problem didn’t occur. 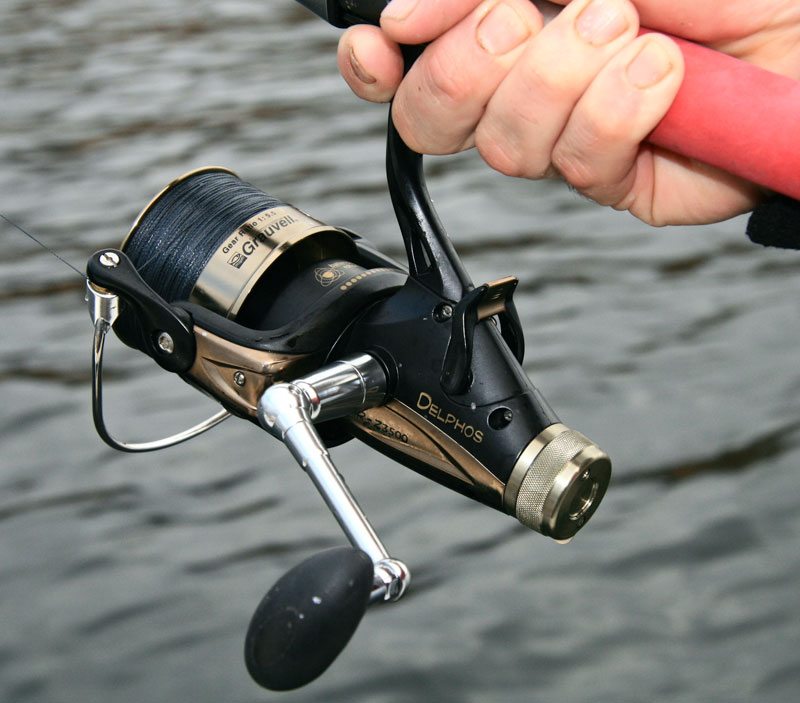 The Delphos was next forced to confront up to 400 feet of water in Loch Sunart for spurdog and thornbacks for the final part of its appraisal. Although there is very little tide in the loch the depth and bait size means you have to use 10oz of lead to get everything to the bottom quickly. This time my boat partner Tony Voss used the reel while I snapped a few pictures. Tony caught spurdogs between 7lb and 14lb, plus a small thornback of 4lb. The Delphos took everything in its stride, which is testament to the reel’s overall robustness. The 14lb spur took line smoothly enough against a heavier drag setting than was used on the east coast pollack. It is impossible to say how much of this hard punishment the Delphos could handle, but it came through came through without flinching.

Next day, we found a late shoal of mackerel and used the same set up to feather a few for fresh bait. Almost every time while unhooking a string of fish, if any slack line occurred, the line was under the spool and round the spindle in flash. Each time the spool had to be removed to sort out the ensuing mess. 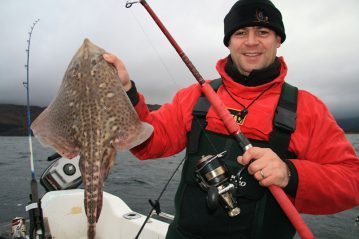 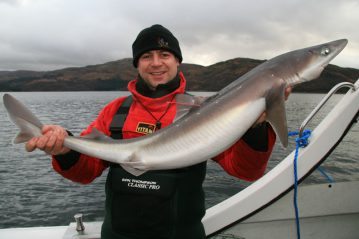 Root of the problem

As I’ve mentioned the source of the problem is obvious. The gap between the inside of the spool and rotor head is massive – big enough to get your finger in between the bottom of the spool and the rest of the rotor mechanism, thus allowing any loose line to become entangled in the spool stopper which is located on the reel spindle. Even with the braid tucked under the line keeper on the spool, if there is any lying loose and the handle is turned it’s straight around the stopper … nightmare!

The whole purpose of skirted spools is to stop the problem of the old fashioned spinning reels, which was the line wrapping around the spindle. The designers at Grauvell have invented a whole new design that revisits the problem in all its horrible 21st century glory.

For freshwater applications such as carp and pike fishing, which is really what a reel like the Grauvell Delphos 3500 was designed for, it should be fine with big baits and the line kept tensioned all the time while fishing. In sea angling applications with a lack of line tension such as when float fishing, spinning with light lures such as lightweight poppers and other plugs, slugos and other soft baits for bass etc, I would pick another reel. With the Delphos, you may well spend more time untangling expensive braided line from the reel spindle than actually fishing.

The build quality of the Grauvell Delphos is excellent and despite the niggling line trapping problems, if used for the purpose it was intended, with substantial weight attached, it will give years of reliable use. If I were to give this solid little reel marks out of 10 then it would score 5, marking it down only for recurring line trap.

The Delphos BR-Z3500 is available from Grauvell stockists.