Decent shore tackle is not beyond the reach of those who either can’t lay hands on mountains of cash, or others who simply don’t want to break the bank. Currently selling for under £40, the Fisheagle CL50 multiplier reel from Glasgow Angling Centre is a prime example of very competitively priced kit.

There is no need to spend a fortune on tackle to catch fish, especially if fishing at modest range over clean ground. Small estuary situations, and dock-side or promenade stances for flounders, eels, bass, whiting and codling can all be very ably addressed with inexpensive tackle. A basic bass-type rod combined with the Fisheagle CL50 multiplier reel costing under £40 and featured here is more than up to such jobs. 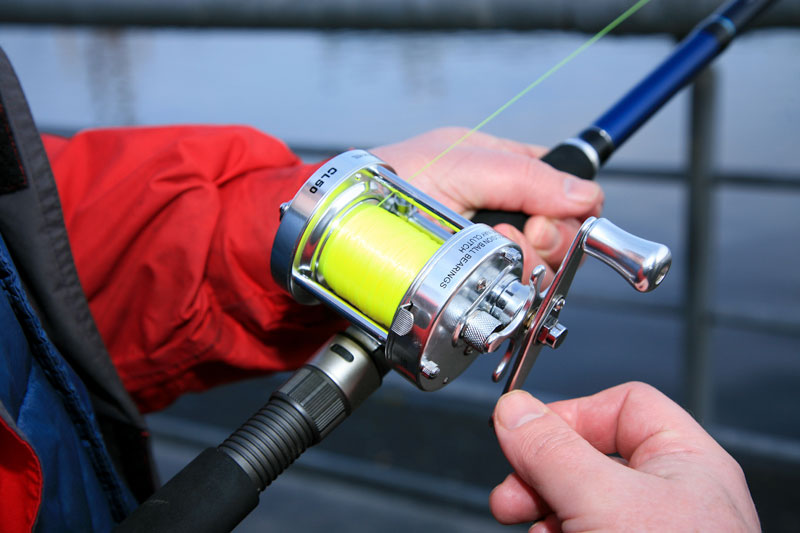 An all-chrome, three bearing, level-wind reel that’s comparable in size to a 6500/7HT, the CL50 fits the bill as a short range clean beach fishing reel, or light inshore boat reel for likes of pollack, bream and plaice. It swallows at least 250 yards of 0.35mm line and looks considerably more expensive than the reality. The classic spool release button locates positively when depressed for casting. Auto spool engagement clicks into play with a ¼ turn of the handle, while the ratchet switch is located on the left-hand side-plate, providing a positive audible clicker when pushed forward to the ON position.

Three main captive screws locate into the frame crossbars and hold the right-hand side-plate in place. An all-metal double-grip handle powers the brass pinion and main gear, and there is surprisingly little detectable play in the handle stack. On inspection, the internals were not particularly well greased, and they would benefit from a more generous smearing to help stave off inevitable saltwater ingress and subsequent corrosion from the inside out. 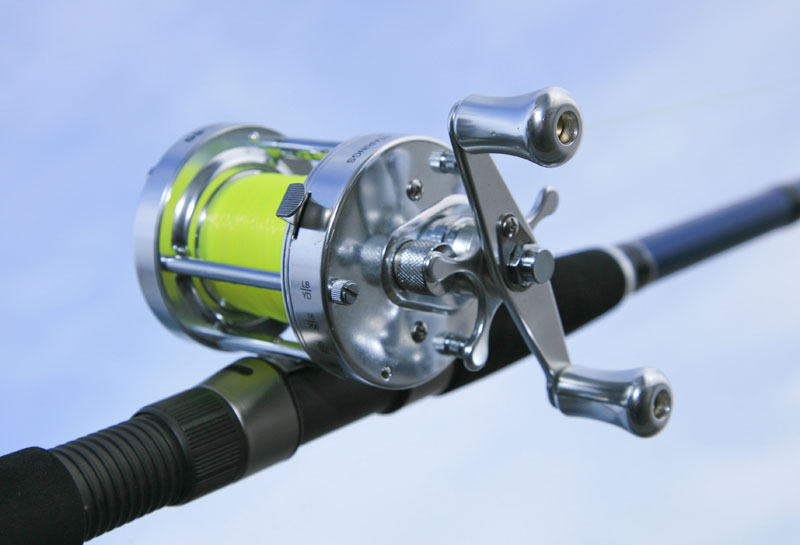 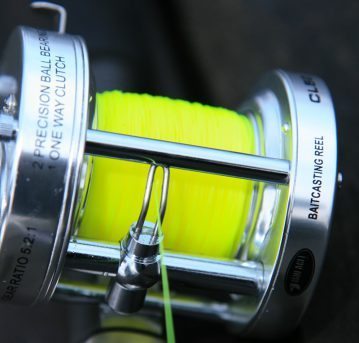 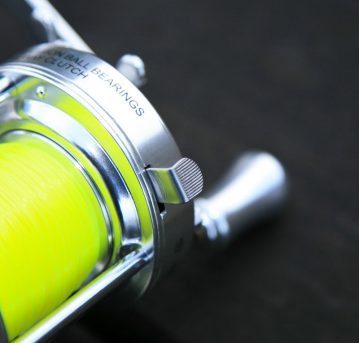 Spool alignment is via the tensioner sited under the star drag wheel, but the spool didn’t centre particularly well when I set the reel up for testing. Convinced I could improve the situation I removed the handle side-plate and the spool to allow access to the spindle housing and bearing inside the left side-plate. The countersunk bearing was not flush with the housing and clearly the reason why the spool could not be properly aligned. Correction was a simple matter of popping the bearing to reveal two brass spacer shims, which were surplus to requirements and the cause of the problem. With the brass spacers removed the bearing sat flush and the spool could now be centred perfectly. Two nylon brake blocks are fitted for centrifugal braking.

There remains a noticeable enough gap between spool and frame into which lines below 0.40mm are easily sucked… a further reason to use a thicker diameter mono casting leader. This is a reel that under no circumstances should be generously spooled with line. To do so will simply encourage line into the spool void. The reel foot is riveted in place will have to be watched for signs of corrosion.

We set the reel up on a Daiwa Theory bass rod and took it to an easy local dock-side venue for testing. Flounders are normally found anywhere from straight down the wall to about 30 metres out. Gentle lobs easily took a pair of unclipped baits to 80 yards and four of us took turns with the reel. A couple of our number are modest casters with some glaring bad style habits, but none of the group suffered any unruly performance issues. The general consensus was that the level-wind was actually quite advantageous for exactly this kind of easy, short to mid range shore fishing.

Drag performance was found to be satisfyingly sound under test conditions. Maximum tension can be wound into the drag by screwing the star down drag tight but there is very little need for the types of fishing that we would pitch the Fisheagle CL50 reel at. 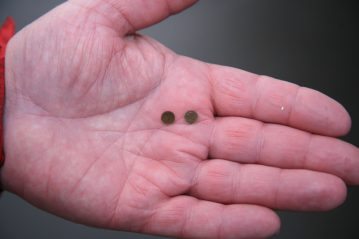 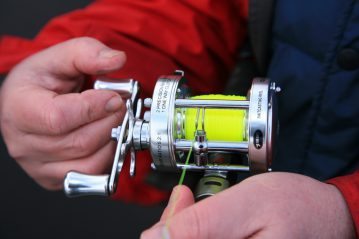 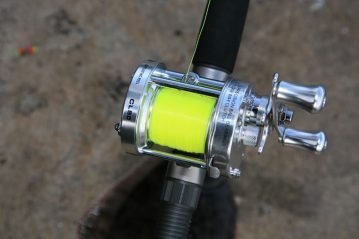 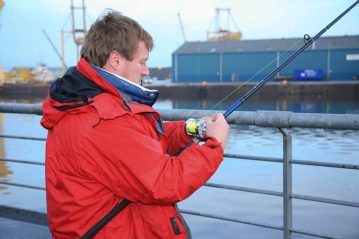 Many similar reels in the under £50 cash bracket are simply accidents waiting to happen, with casting/fishing performance routinely rough and unpredictable. The CL50 is a different animal that bucks the negative trend and conquers common stumbling blocks. Make no mistake this is not a bells and whistles distance machine requiring considerable reel tuning and casting skill to master. Rather, it is a simple, aesthetically attractive and inexpensive reel that does uncomplicated fishing well. The CL50 scores highly for simple construction, ease of use and excellent price. Currently at just £39.99 from Glasgow Angling Centre it is impossible to argue against the CL50 for the fishing situations indicated. With nothing more than a wipe down and spruce with WD40 after each fishing session, and regular oiling, it should provide long and reliable service.