Not everyone wants, needs or even considers buying an expensive boat reel. If, by expensive, we are talking reels costing from one hundred to several hundred pounds, the question then has to be: Can a similar level of performance be delivered by a reel costing a fraction of the loftier prices? The staple answer is most often ‘no’, but there are low cost gems out there if anglers are of a mind to seek them out.

With an RRP of £49.99 the Fish Zone Spyder LW12 boat multiplier is a good example of a boat reel that’s fat on features without being prohibitive on price. My task was to determine if the positive noises circulating about this inexpensive graphite-bodied reel were accurate or misplaced bluster. 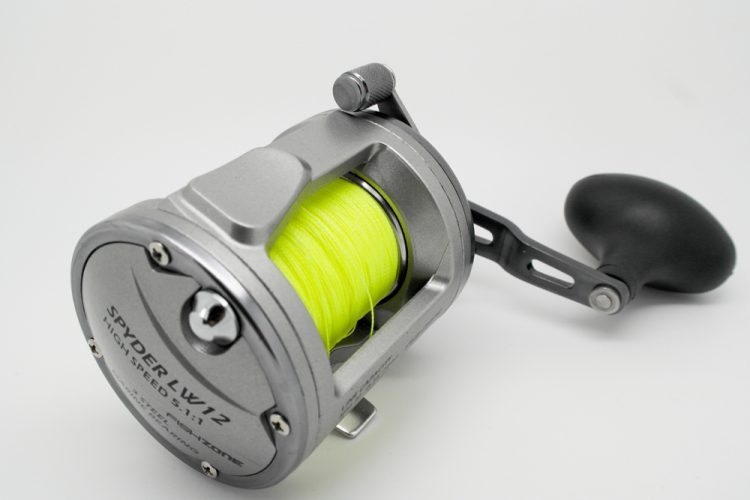 The Spyder is a standard right-hand wind, star drag boat reel. Solidly built, it’s modestly sized but all in proportion. Line distribution is taken care of by a meaty level wind assembly, which doesn’t court obvious sticking issues. Line lay profile is good in the main, but like every level wind reel ever produced it’s imperfect to the spool edges at the end of each back and forth shuttle.

Spool pick-up is switched in manually, and the free-spool lever is of a good size. Line capacity is not huge but it’s not bad either. The machined aluminium spool took a lump of mono backing and 250 metres of 30lb braid easily.

The star drag wheel is not claustrophobically jammed between the frame and the handle. Rather, it sits in generous space between the two, making adjustment easy even if you have great big sausage fingers. The incremental drag system is gutsy and perhaps more up market than might be expected in this modest price bracket. The knurled side-play knob is likewise easy to access and operate. 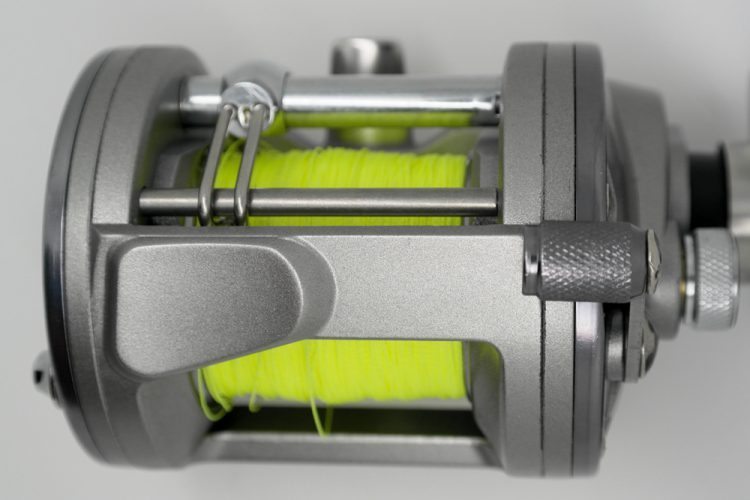 The handle terminates in a large rugby ball grip, and presents a choice of two crank positions. I tried the handle at both lengths and concluded it works better and feels much more balanced in the shorter position.

A moulded thumb support is sited on the top of the frame. This practical feature works well for those that like to work a lure or play a fish by gripping the rod butt and reel together in the left hand, while winding with the right. Other features include a decent loud ratchet alarm and the strong footplate attachment.

The box states that the reel is best matched with an 8lb – 12lb class rod. I would suggest pairing with a 12lb or 20lb class boat rod, or maybe a tippy uptider to be used in the long downtide sense.

The Spyder is un-braked and not ideal for casting. It runs on three stainless bearings, sports a brass drive gear and is internally well ordered. And the guts of the thing don’t automatically explode into a shrapnel mess of springs, circlips and cogs when the gear housing is detached from the frame. Essentially, this is a low maintenance reel that can be generously wadded with grease and otherwise relied upon to delivery sturdy downtide performance.

The reel felt well balanced and not overly heavy attached to a 7’ 8”, 12-20lb class boat rod rung and intended for braid use. It performed well with up to 1lb of lead among rocks and kelp for a mix of codling, pollack and wrasse, and it breezed fishing on sand for a mainstay of dabs and gurnards. 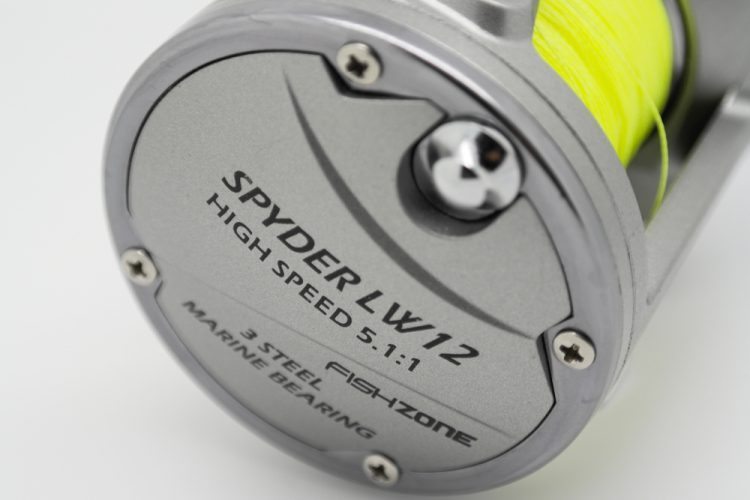 I have never been a huge fan of level wind boat reels, but I understand that many anglers rely on them. Those that like level winds will find this reel a serious player. The depressed thumb rest on the top bar is a simple but effective feature that makes it comfortable to brace and use.

A solid star drag assembly that can be minutely and accurately adjusted underpins all that this reel has to offer. The drag is smooth with no detectable lurching under strain. Snaggy ground and headstrong pollack presented no problems, and I would confidently pitch the reel at more challenging quarry such as big rays and tope.

The Spyder is a workmanlike reel that represents excellent value for money. Build quality, winding power and drag performance are all notable in this tough little budget slugger. While it’s far from the smoothest reel in the world, neither is it as rough as the proverbial bag of bones. Operation is not completely noise-less but there are much more expensive, noisier reels that click and clang like rattling jalopies. If scoring the Spyder out of 10, I would give 9 on price, and a steady 7 overall.

I would suggest that at around £50 a pop, if you managed to kill this reel and binned it after a couple of seasons then you have more that got your money’s worth. The Spyder LW12 and its bigger brother, the LW20 size, are available through Fish Zone dealers such as Veals Mail Order.