You’ve asked for full on tackle reviews and Planet Sea Fishing is happy to oblige. Here we put the Abu BG 7000i HSN through its paces.

Abu reels have a reputation for quality and performance reliability that stretches back decades. Some of the UK’s top shore and boat anglers rely heavily on Abu reels, particularly the various incarnations of the famous 6500 and 7000 series. Synonymous with the Swedish build quality and design, those much loved earlier Abu multipliers oozed class, which arguably has not carried forward into the 21st century. For better or worse, today only the thinking and design are rooted in Sweden, while production is out of China. 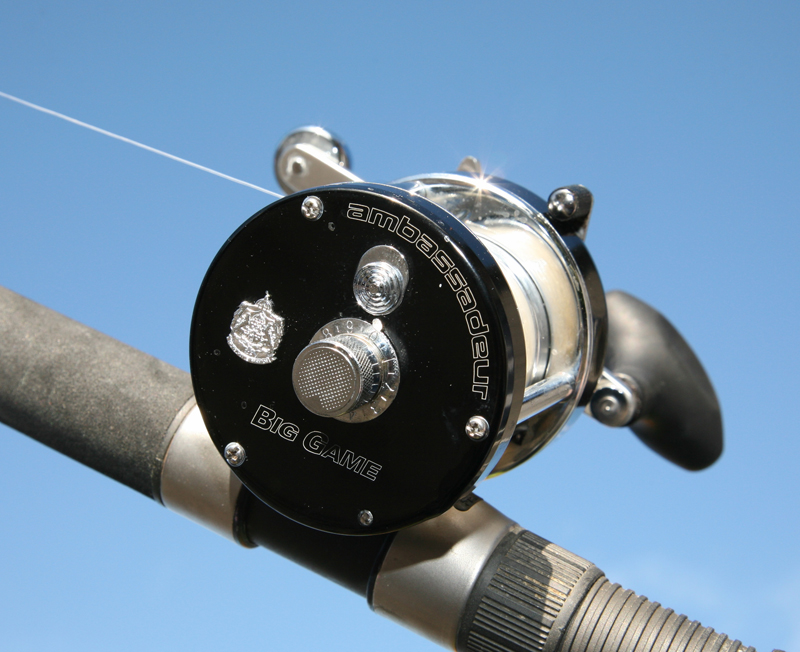 I have Abu reels that are more than 30 years old, and would rate the black 7000C and 9000CL two-speed multipliers among the best sea angling reels ever made. With minimal maintenance these reels have remained in perfect working order through to today, having out-lived and out-performed goodness knows how many reels in the intervening period of years. Equally, I remember well the brass bushed ‘red’ Abu 7000s with the side plates that would practically dissolve on contact with saltwater and quickly assume the water resistance of a teabag! 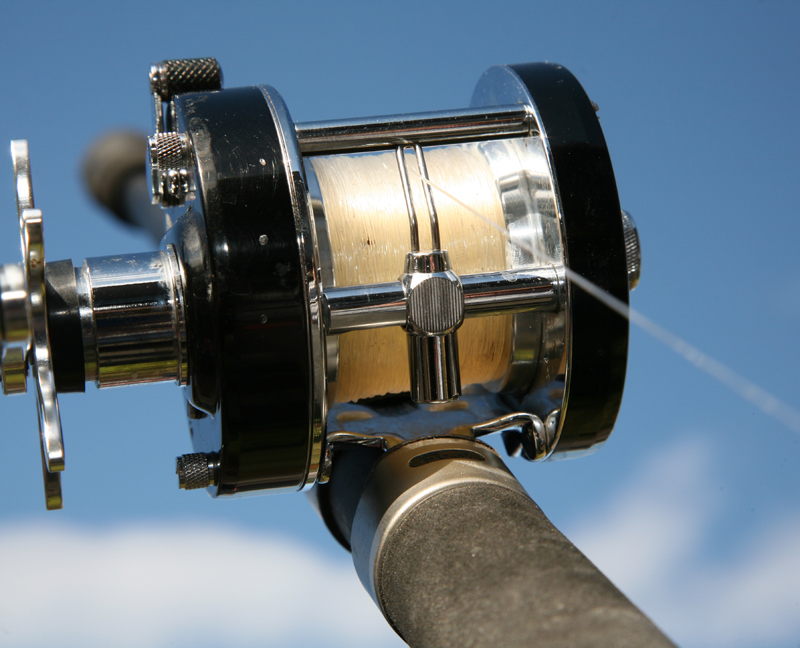 As evidenced by the ‘Made in China’ sticker on the underside of our BG 7000i HSN test reel, Abu make no secret of their new generation Chinese reel production. But is Far Eastern origin in Abu’s case the big nasty that some people believe it to be? The old stalwarts definitely think so, but wider angler opinion is divided. Ultimately, time will be the biggest teller. 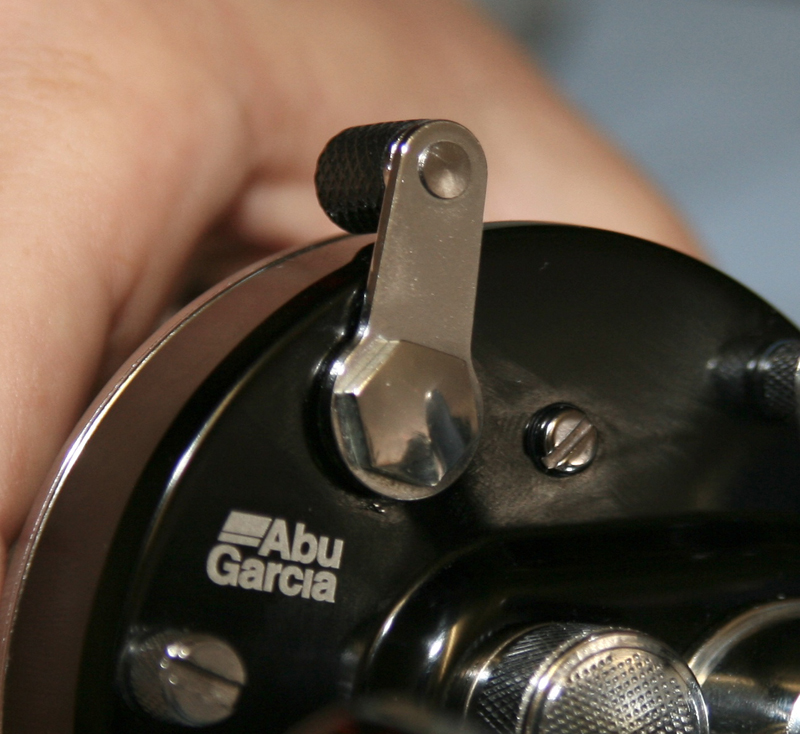 The 7000i HSN is a narrow-spooled, standard right-hand wind multiplier with a level-wind mechanism. I understand the HSN prefix to stand for High Speed Narrow. Narrow spools are particularly good for holding braided lines. Despite suggestion to the contrary in various retailers’ sales pitches, this is not an ideal shore fishing reel. The 7000i HSN ticks most of the boxes that a general-purpose boat reel needs to, and it should ideally be regarded as such.

Spool release/engagement is via a lever rather than the depressible thumb-button common to other similar Abu star drag reels. Turning the reel handle actions automatic spool pick-up. My initial thoughts are that the lever does not look the strongest feature on the reel, and problems may be experienced in time. I say this based on experienced of similarly designed reels that either developed an engagement stutter and ultimately failed in use, or where the lever component simply snapped off without much encouragement. This is a cursory observation to be either borne out or dismissed after a good period of live use. The riveted chrome frame as seen on so many Abu reels is old hat in my opinion. A rigid composite or cast one-piece frame would notch up robustness and give the reel an overall better aesthetic, but this would no doubt add considerably to the price of what is currently a very competitively priced reel. 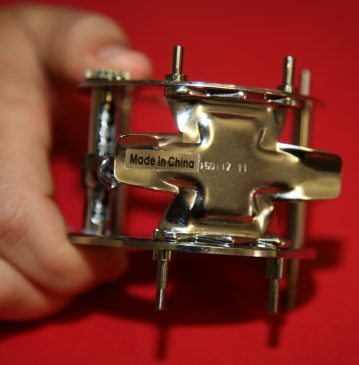 Side-play and spool alignment are adjusted by means of end float knobs situated centrally on either side-plate. A solid and very audible clicker alarm/ratchet is fitted. An area where this and other new generation Abu reels leave even their lauded classic predecessors for dead is in the handle and star drag wheel departments. The chromed handle is thicker and sturdier throughout, while the same can be said of the star wheel, which will not bend out of shape when suffering the everyday knocks of boat fishing. The handle sports a large ergonomically shaped, rubberised palm-grip that sits well in the hand and feels comfortable. The reel comes supplied with a four spare brake blocks, a bottle of oil and tool. 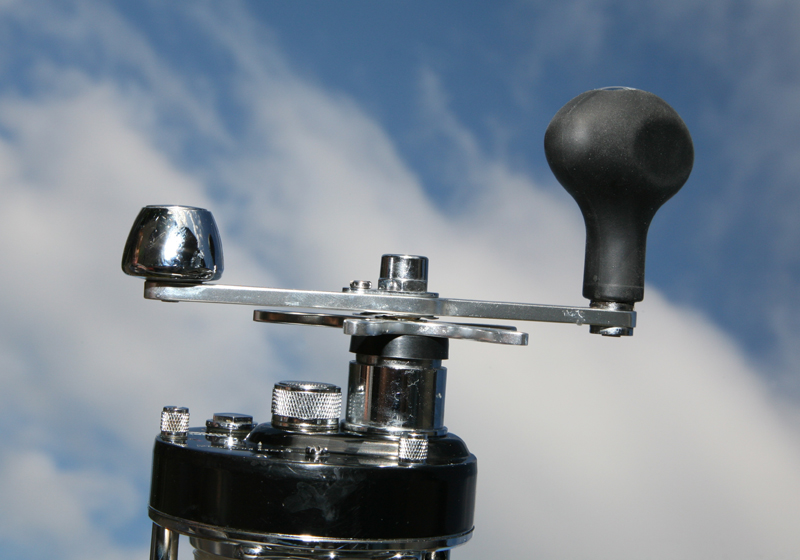 Out of the blocks

Unlike alternative and older Abu reels where the centrifugal brake assembly was essentially four metal spindle-mounted pins to carry the free-riding brake blocks, the 7000i HSN sports a one-piece all-plastic brake block holder which holds all four flat blocks in situ… in other words, they won’t fall off and get lost every time the side plate is removed. Each block can be locked out of play as required. 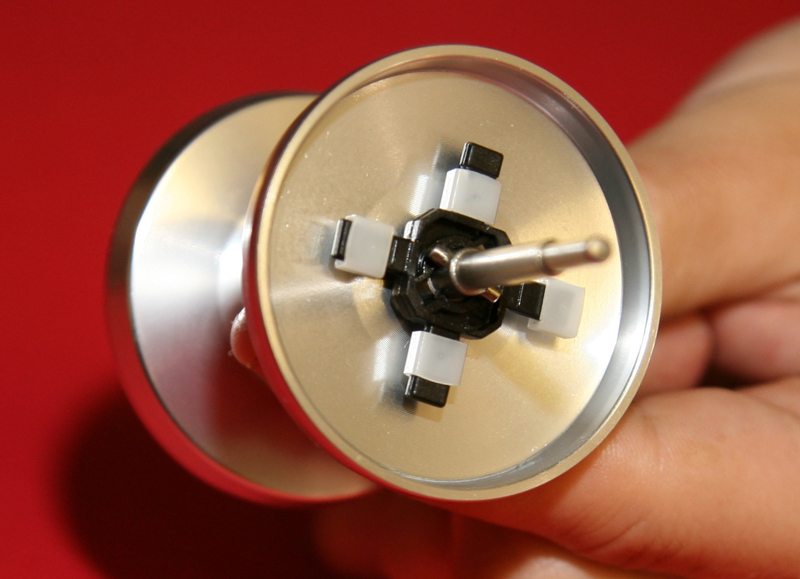 Now, where is the last place you would want grease contamination on your car? Answer: on the brakes pads. The same thinking should be applied to reels. I wasn’t surprised to find the brake block holder clogged with grease, causing the blocks to stick and be ineffectual. This is a common complaint of new reels generally. A good clean rectified the treacly problem, and two blocks were clipped back in the out-of-use position. By comparison there was an ungenerous amount of grease evident where it should have been… internally over the drive gear etc. Both the pinion and main drive gear are standard brass. 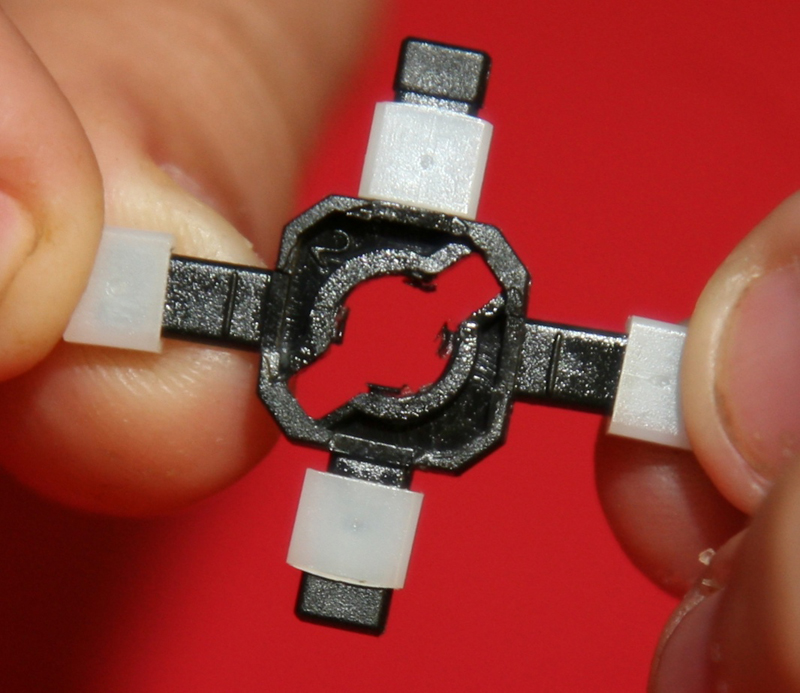 Each year I fish an Open boat event that dictates all anglers must use the same monofilament line supplied by the organisers. The line supplied was 12lb Drennan Distance Beach Cast, which was dually loaded onto the 7000i HSN. The temptation when loading a new reel with line is to over-fill it. I deliberately kept the line level several millimetres below the spool edge to keep things manageable, but there was another reason. There is a noticeable gap between the spool edge and the frame. Low diameter line, like the 12lb gear I was using, or a much heavier braid, could easily find its way into this void and become terminally trapped behind the spool. This was an inherent problem with certain earlier Abu reels and is remembered as great big banana skin that many innocents have fallen victim to. Well, what-do-you-know? Even under-filled, the 12lb line twice managed to wedge behind the spool, becoming badly chewed, and forcing me to cut out the damaged section. This is not good at any time but it is a time-wasting nightmare in a competition situation, and it only seems to happen when there are fish coming in all around. 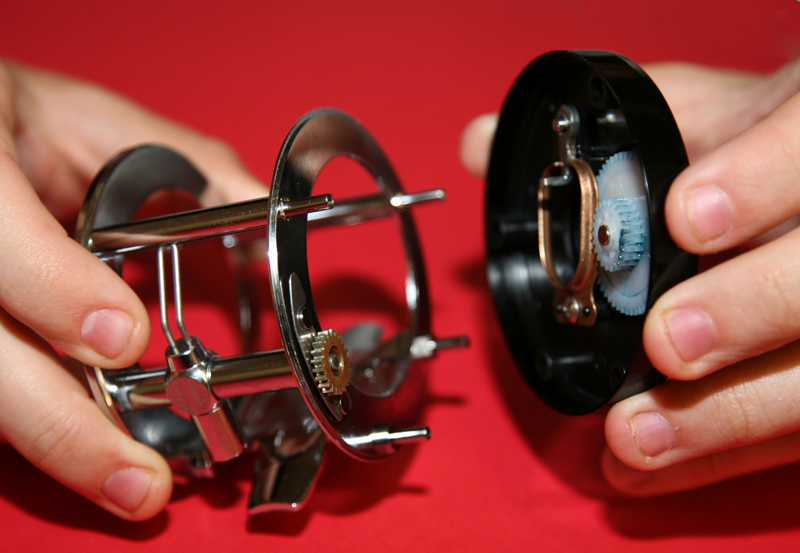 The line trapping issue aside, the reel stood up very well. Fishing for cod, pollack, ling, wrasse and dabs with a mixture of rigs, lures and baits, it was hard to fault general performance. The 5.3:1 retrieve ratio – coupled with the spool size and a sensible line level – is excellent for retrieving for pollack and general bottom fishing. The drag is professionally smooth, and was regularly called upon to surrender line on pre-set demand to fish up to 7lb. The star drag wheel is not impeded by the handle design, and can be easily adjusted during the fight when required. The following day the mono was stripped back and replaced with 30lb braided line – a real pain in the bum task when you’ve left your line stripper at home! No such line trapping problems this time. The narrow spool design is perfect for braid use, and helps eradicate ‘braid bite’ problems. Braid biting is where the top layers of the braided line dig down into those below, causing snagging as the line leaves the spool during casting, or when simply downtide boat fishing. 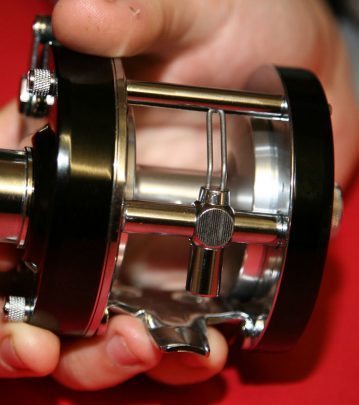 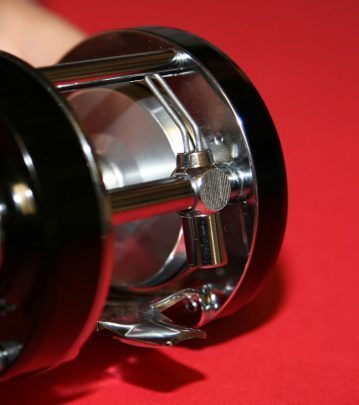 It is early days, but the levelwind mechanism performed well on the two occasions that the reel has been used so far. Line distribution was uniform with no obvious build up at the sides. In the boat-casting / uptide sense the 7000i HSN casts well enough with both mono and braid. The reel is not unruly or fast straight from the box… quite the opposite and fact, which is exactly what you want from a general-purpose boat reel that might also be pressed into regular uptide service. Set with just a hint of side-play and two active brake blocks, baited rigs and casting pirks of up to 6oz cast well enough. Just remember to check that brake block holder for grease in the first instance. 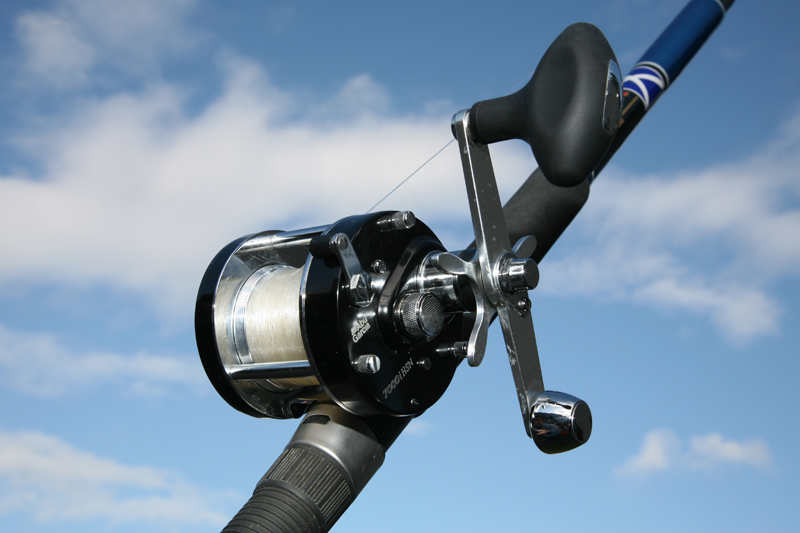 All things considered, this is a very good reel for the money. Functional and uncomplicated, it will service the everyday needs of a large proportion of anglers who don’t want to spend a fortune on reels. It’s kit for the job that looks half decent too. But good advice would be to stick to using braid of not less than 30lb, preferably with a generous diameter, or a minimum of 20lb standard diameter mono. How the side-plates stand up to longer term saltwater exposure, and the durability of the spool lever and underpinning mechanism will only be determined in time. But with a regular wash-down, clean and oil the 7000i HSN should last more than long enough to justify the modest price tag.

Yakity-yak… you won’t look back