Following on from our report on the Vass 175 lightweight wet weather gear, Steve Souter takes a look at the heavier 350 Edition waterproof smock and bib & brace bottoms.

Traditional sea fishing oilskins, while being incredibly waterproof, don’t score huge points for style or freedom of movement… that’s why you don’t see many yacht racers decked out like North sea trawlermen! The three-fold challenge lies in being able to produce performance garments that shut out the worst weather but that still afford the wearer excellent freedom of movement, while looking stylish. The truth is many of the most weather resistant professional quality waterproofs still look like ugly Sou’Wester attire from around the middle of last century, so wouldn’t it be great to have gear that can boast excellent performance and that looks good too? Well, enter the Team Vass Edition 350 waterproofs. 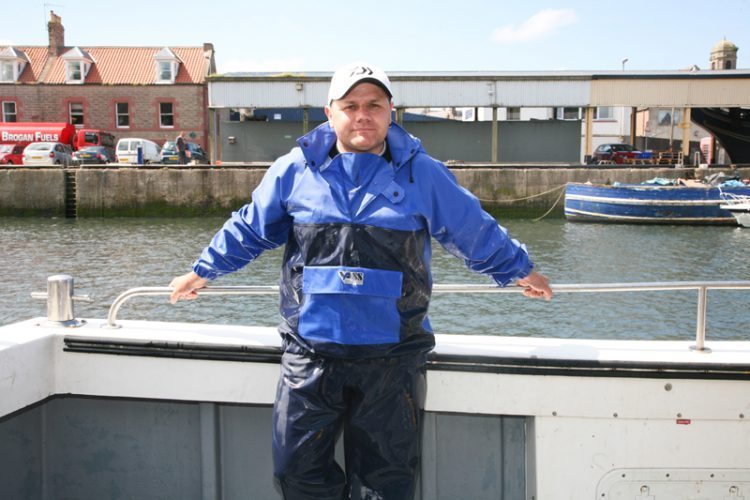 The eye-catching royal blue and navy Team Vass Edition 350 heavy-duty waterproof smock and bib & brace are light and supple despite their heavy-duty tag. Indeed, the HD tag refers more to their commendable sea and wet weather resistance than their weightiness. Made from Vass-Tex 350 bi-stretch material these are the very same waterproofs worn by the Scotland International Boat Fishing Team and others.

Features on the smock include strong quad-welded seams for ultimate waterproofing, a more generous collar than on the standard first edition smock, toughened press-studs at the neck, elasticated cuffs and lower hem, and a large Velcro-fastening belly pocket. The roomy storm hood can be tucked up under the collar or pulled into play as required. The hood affords ample protection from flying spray and draws well around a peaked cap, which is advised to keep the eye line clear.

If you read my previous report on the Vass 175 Edition 2 smock, you’ll know that I griped that the hood pull cord began to fray after a time. I am pleased to report that the issue has been quickly addressed across the Vass range and the Team Vass 350 Edition smock has an upgraded and much harder-wearing cord.

The waterproofs tested here were the prototypes and the finished ones are even smarter, with a bold logo on the back, and reflective Team Vass lettering down the right arm and on the shoulders.

The Team Vass Edition bib and brace is simply designed and easy to shuffle into or throw off. The straps and clips are strong and unlikely to perish in a hurry. I love the fact that there’s plenty of ankle room to step into them with your deck boots on. I hate having to don a bib & brace first and then hop dementedly from foot-to-foot because restrictive ankle width leaves little alternative.

I asked a lot of questions of these waterproofs out in the Western Isles in the build-up to and during the recent Home International Boat Championships. In practice the Scotland Team had to contend with some horrendous weather and huge seas of the kind that make it difficult to stand upright and glaringly expose any frailties in waterproof gear.

I faced down some frightening waves and, on one particular day, a continual torrent spewing off a Catamaran roof that ensured I was effectively power-hosed every time the boat motored up to cover a drift! The upshot is that when I shrugged out of my wet gear at the end of each day my clothing was bone dry underneath.

Shore anglers will find the Team Edition gear easy to travel and cast in so long as they do not overload on under-layers. Both garments dry out in a jiffy if well aired and provided any salt residue is wiped off. This is a real boon if fishing away from home for more than one day. Note also that these waterproofs can be slung in the washing machine without any fear of degrading their water proofing abilities.