Perfecting the choice of two Islander Spin Jig boat rods was challenging, but with blanks sourced from New Zealand, and the best fittings and build quality available UK HOOKS are confident they have got them spot on. Des Westmore offers a little background and opinion.

Speed jigging or vertical jigging, using profiled speed jigs with Assist or Stinger hooks fitted at the top, has become popular around the UK.  Although the technique was pioneered in Japan for the likes of Dog Tooth tuna, there are times in the UK where this technique pays dividends for the likes of bass, cod and pollack. As the name suggests, lures are fished at high speed, either with a very fast retrieve, or with an aggressive adaptation of the sink and draw method. I know that some UK anglers have enjoyed success with speed jigs using different techniques, but the methods I have just outlined are what speed jigging is all about… anything else is simply lure fishing using speed jigs. 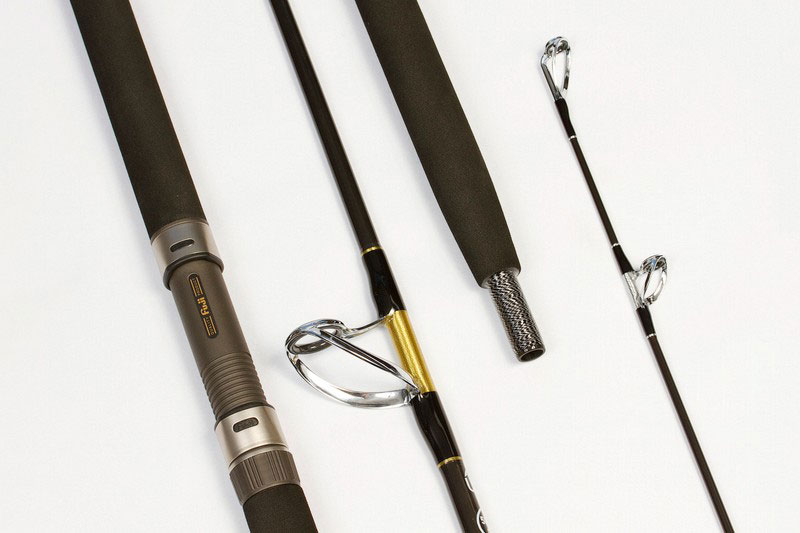 The true speed jigging technique puts a lot of strain on your rod and reel – even more so when you hook a fish. This has led to the development of some specialist items of equipment such as high speed, ultra strong fixed spool reels that can cost many hundreds of pounds along with plenty of rods aimed squarely at this method of fishing. While the reels have often found favour in the UK (and apart from the price why shouldn’t they?) the same cannot be said of many of the rods. All the ones that I have been sent for review have not been well received by testers for two reasons in the main; the rods are too short and too stiff. There is a very good reason for this in that the rods were not really designed for the UK where your likely adversary is a 10lb cod on a 200g lure not a 50lb tuna. Because of this, anglers have just adapted the gear they already own with the venerable uptider often being pressed into yet another use other than uptiding.

Mike Taylor at UK Hooks has been selling lots of speed jigs, and because of that he has now added two new models to the growing “Islander” range of rods custom-built for Mike by rod building guru Chris Dance. At last you can have a speed jigging rod that is aimed at the fishing available in the UK not Japan, Australia or the USA. Of course, while Chris builds the rods he does not lay up the blanks and that is one of the reasons that the “Spin Jig” rods, as they will be known, were a little while in getting to the market. Mike wanted to get the choice of blank right not only from the point of view of action but also quality – Mike sells a lot of Zzipplex beach rods and the new rods had to match up to that level of integrity. For the existing Islander range of boat rods Mike had already settled on a selection of blanks which are shipped all the way from New Zealand, and it is this manufacturer who will be providing the blanks for the Spin Jig too. 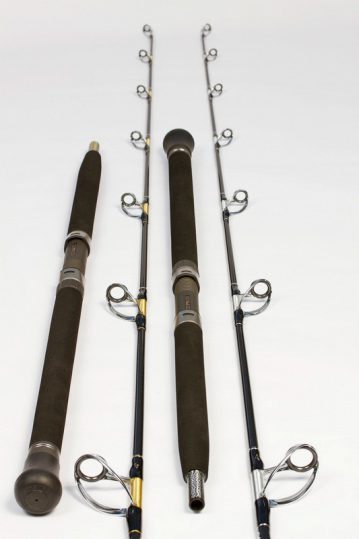 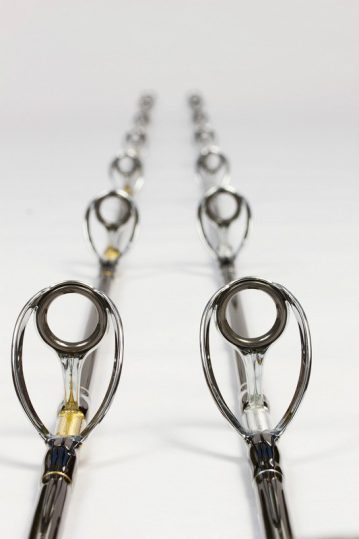 Two rods will initially be available; the 30-50lb and the 50-80lb. The 30-50lb rod has been tested to have a 55lb dead lift capacity by the manufacturer and is intended for lures of 120-220g while the 50-80lb is rated for a 66lb dead lift and is intended for lures of 180-330g. These are the blank manufacturer’s designations and while it sounds like they should have the action of a telegraph pole, nothing could be further from the truth. The dead lift rating is indicative of the physical strength of the blank, not its action, so even the 50-80lb has a suppleness to it that is not evident in most mass produced speed jigging rods, while 30-50lb feels alive even before you clamp on a reel and hang a lure from the end. There are two reasons for this. Firstly, the rod’s length: instead of being something like 5’6” in length, the Spin Jigs are a full 7’. Secondly, the positioning of the reel seat: the handle is proportioned exactly like a UK angler would expect and finished throughout with comfortable EVA grips. Not only was the ill-fated last speed jigging rod I was sent only 5’ 6” long, but the reel was positioned nearly half way up it. To say it killed that rod’s action would be an understatement but there are no such problems with the Spin Jig.

In-keeping with the latest developments in boat rod design, the rods’ tip sections, which at the bottom end are of a similar diameter to a five pence piece, plug smoothly into the handle just above the EVA fore grip. Once assembled, this joint is nearly invisible and gives the impression of a one piece rod. Just for the record, the butt diameters are 13.1mm and 14.9mm while the tip diameters are 3.2mm and 3.5mm for the 30-50lb and 50-80lb rods respectively. 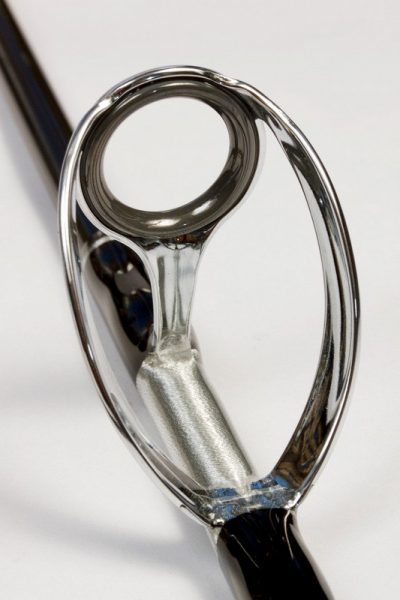 Of course, it would be no use getting blanks shipped from New Zealand for a custom build if you used second rate fittings. It comes then as no surprise that genuine Fuji fittings are used throughout including gimble, butt cap, reel seat and rings and the rings warrant a special mention. They are the excellent stainless steel framed Fuji CHBNG Silicon Nitride II which are hard enough to be used with wire line as well as braid or mono. They are of a three-legged low-rider style mounted in what I would say is the correct way – with the single leg pointing up the rod. I know that many speed jigging rods have the rings mounted the other way round, so if this is your preference you will need to let Mike know at the time of ordering. It should also be noted that the two rods shown here are rung with fixed spool usage in mind so if you intend to use yours with a multiplier you will need to tell Mike that as well. Of course, you get to choose the colour of the whippings as well.

If speed jigging is your thing then a call to UK Hooks about these rods is advised. Of course a custom-built rod is never going to be cheap and the price for each rod reviewed here is £272+VAT. I think this is a very fair price given that there are mass produced rods on the market which are built in China yet command RRP’s of £230-£260. For more information have a look at www.uk-hooks.com or better still give Mike a call on 01983 868687 and have a chat about getting one made in time for the new boat fishing season.