Seasoned shore angler Mike Bowden tests the Iridium Firesurf 420 beach rod from Tronixpro on home turf and during a fishing week in Iceland.

Powerful and fast actioned, the slim-line Tronixpro Iridium Firesurf 420 shore rod, with its smart dark red and white livery, possesses a lovely stiff middle section that so many rods of this European fixed spool ilk glaringly lack. The responsive tip displays excellent bite transmission, even from smaller fish, and cuts a desirably firm rather than floppy aspect in windy conditions. These early impressions were formed on a local beach and helped convince me to take the 13-and-a-half foot rod to Iceland for some proper fishing.

The 4.2 metre overall length is comprised of three equal length sections. In typical continental fashion each section is reinforced with a metal band on the female side of the joint. Fitted with Low Rider style guides, the butt ring is whipped in the now customary reversed direction for fixed spool rods. The butt section has a BHPS 24mm Fuji reel seat centred at 32 inches from the butt cap – a good general working position for the majority of anglers. The lower handgrip consists of black crosshatched shrink-wrap for a secure and effective grip. The casting spectrum/ action is shown as suitable for leads between 100 and 200g. 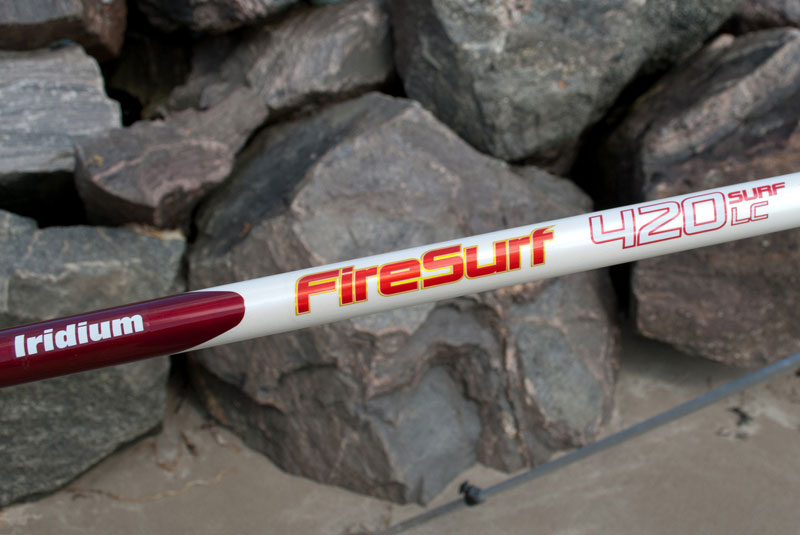 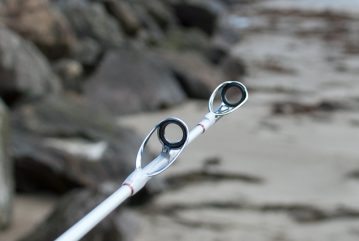 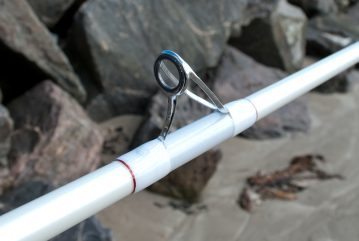 My first fishing casts with the Iridium were made in good conditions on my local beach, using 5 and 6oz plain leads, and a medium-sized fixed spool reel loaded with 0.35mm line to a 60lb tapered leader. Punching into a basic aerialised ground cast brought the stiff centre section instantly into play, with no mid-rod collapsing under load, or power loss due to torque. After warming up with several restrained casts, I began to hit the 5oz lead with more vigour. Baited rigs could be sent 90 – 100 metres easily with the simplest of casts. And there is no doubt that such fishing distances are quickly available to even inexperienced sea anglers using the Iridium rod on any similarly flat beach, breakwater or pier venue 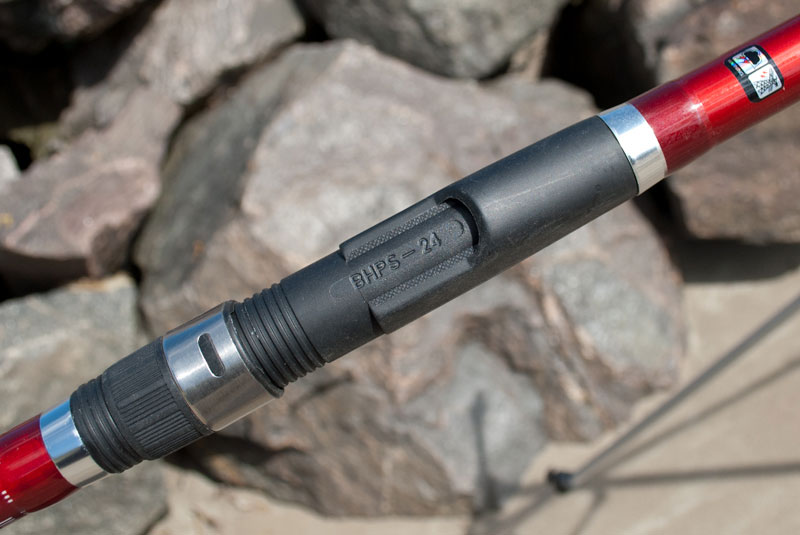 Casting with a 6oz lead brought a slight change in feel but did not worry the blank in the slightest. Slowing the cast down, the rod could be felt loading more deeply during the set up, and moreso as power was applied. Casts released cleanly with no leader knot snagging issues. Indeed, with the rod pointed skywards, time and again, I watched as large coils of line spilled hypnotically from the reel to be channelled quietly through the reversed low rider bottom guide. Later experience marked 4ozs as a little light, while 7ozs of lead and bait risked overloading the blank. 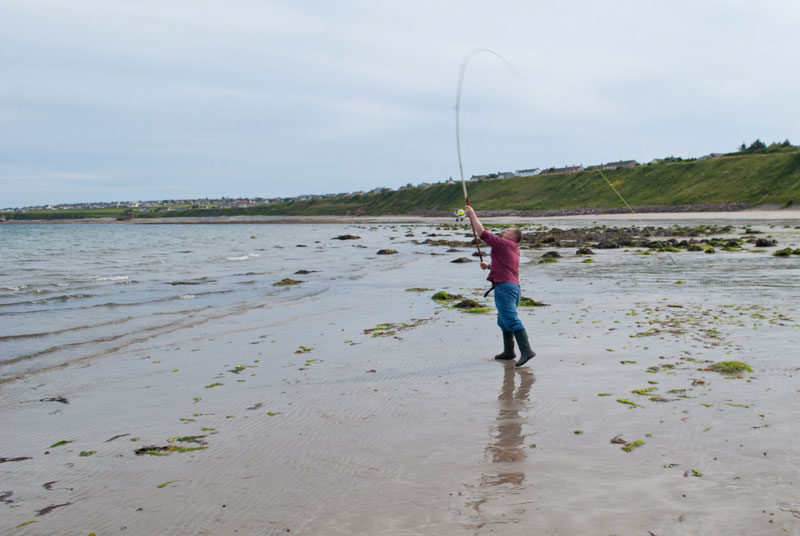 Firesurfing in the Land of Ice and Snow

Several days of shore match and pleasure fishing in the north Icelandic fjords, targeting cod and large numbers of dabs in particular, presented a perfect opportunity to try the rod for real. A daylight practice session on a shallow beach saw me fishing at short and medium range with a Penn Affinity 8000 large fixed spool loaded with 20lb line and a 60lb tapered leader.

I steadily caught dabs the size of dinner plates some 30 metres out, while working at around 70 metres range brought codling to 4lb and more great big dabs than I could shake the rod at! Noticeably, the Firesurf locked into a firm winding curve on the retrieve thanks to that sturdy mid section; allowing me to bully fish clear of the bottom and move them without fear of the rod working against me. 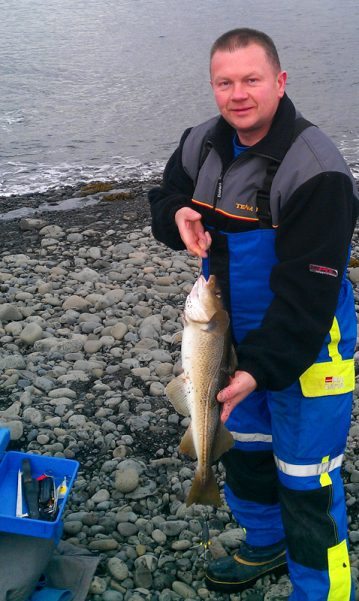 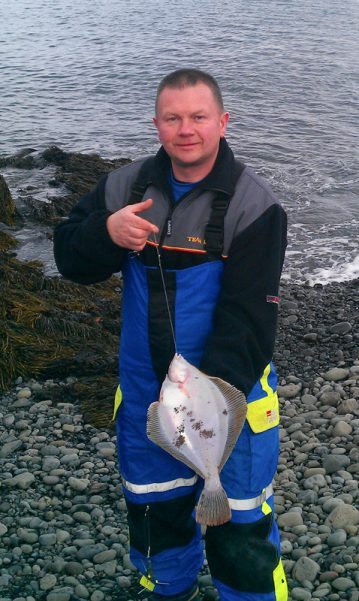 The first match day was on different shallow beach where moderate distance was required to get among fish. I used a 5oz lead and a two-hook rig at 90 metres, and caught small rays to 4lb, codling and large dabs. Bite detection on the Firesurf was superb and the white gloss tip stood out well against overcast skies.

A concrete breakwater facing into deep water, where larger fish were expected, was the venue for the next session. Testing conditions that involved hauling through heavy kelps, some of which detached and had to be winched ashore, would provide a sterner test, but one which the Firesurf took in its stride.

The rod coped easily when called upon to lever double shots of slab dabs – some of which went 2lb in weight – up from the 60 metres depth. The highlight, however, was landing a 9lb cod and 3lb haddock double-shot after winching them up and over a deep vertical reef face covered with thick kelp. This single retrieve demonstrated the inherent power of the Iridium, and served to illustrate that it could be a versatile and effective mixed ground rod. 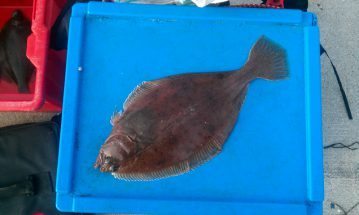 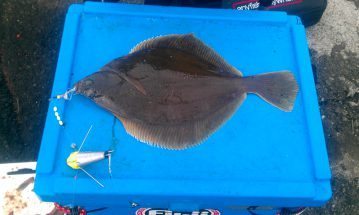 My final day’s fishing before flying home was on a jetty surrounded by deep water. Once again the rod powered through volume dabs, and I was able to lift several cod to 5lb straight from the water without a worry. It was a windy day, and a 5oz grip lead was used to prevent rig rolling, and put a lovely set in the tip, which enabled optimum bite detection. 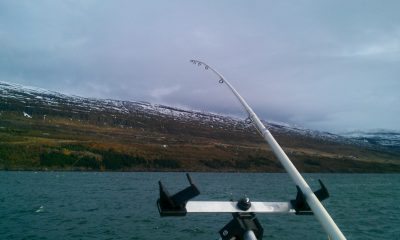 Throughout testing I used tapered, and standard 60lb shock-leaders on various fixed spool reels, and the butt ring channelled the bulkiest leader knots smoothly. The overall rod weight is in keeping with other 13-and-a-half foot three-piece rods, but unlike so many others out there the Iridium Firesurf performed excellently across a wide range of fishing situations, including clean beaches, piers and snaggy ground.

The white gloss tip section would further benefit from some reflective tape for night fishing, but such a minor moan cannot detract from an excellent general-purpose fishing rod that manages to cleverly blend power with finesse for not a lot of money. Costing just under £120 this is great value rod for anglers of all abilities and experiences.