Ally Campbell has never been a tackle tart or junkie and tends to stick to what he likes for as long as possible before changing. However, at the start of 2016 he had just about worn out his favourite competition boat rod which he uses in Scotland and with that model being out of production for several years it was time to invest in something new, the Daiwa Tournament Boat rod.

In the preceding year I had observed some test models for an 8-9ft downtide rod in the hands of Steve Souter which he was working on for Daiwa at the time. Even though they were only early versions, they felt light, powerful and just the right size for me. 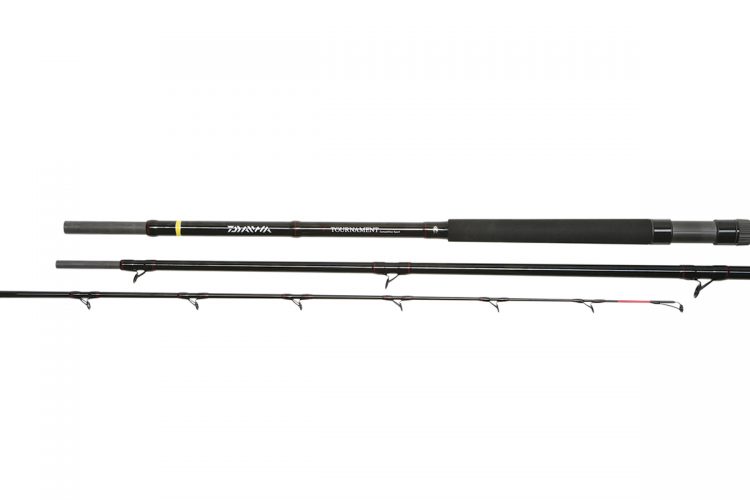 The rods had also been given a glowing recommendation from Scott Gibson who had tested some of the pre-production rods.

When the rods hit the shops I purchased the new Daiwa Tournament Boat rod, specifically the TNB2040-AU. As I am a bit tight with my cash, spending over £200 on this rod was a bit unusual for me so I was going to have to be impressed and having used it for the entire 2016 season across Scotland in varying conditions I think I can now give a well-rounded review of its performance.

I like a no-frills approach to my tackle and the sleeker the better. This rod has a lovely smooth black finish with minimal red whipping and well portioned and simple writing. If you like a gory over the top look to your tackle that attracts everyone’s eyes then this rod isn’t for you. 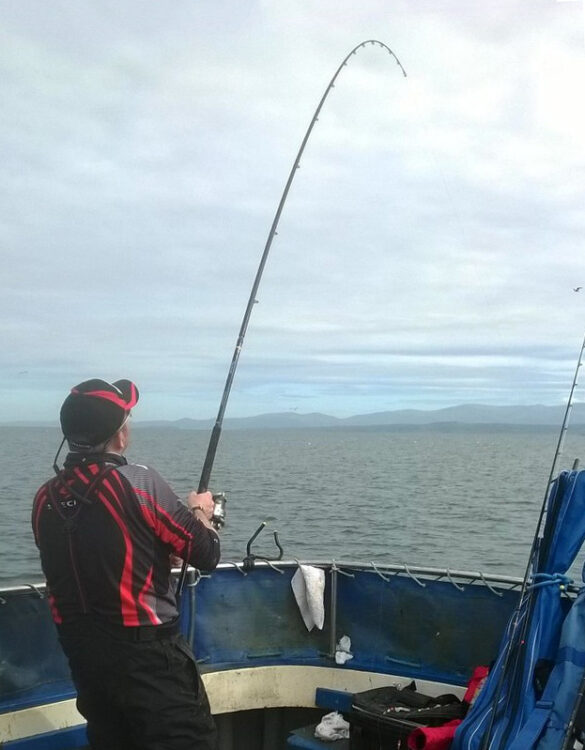 The rod does have an orange tint to the tip to aid bite visualization but again this is carried out in an understated manner so as not to spoil the overall smooth black finish.

On first viewing you wouldn’t imagine this rod is a 20-40lb class rod as it has a very thin blank compared to others in the market. It is also 8‘6“ long which is again when most boat rods of this class are around a foot shorter. I find this set up ideal as the extra length gives you greater control and more flexibility when fighting a fish. It also allows you to do some decent underhand casting which we do a lot of in Scotland when jigging artificial lures on inshore marks. 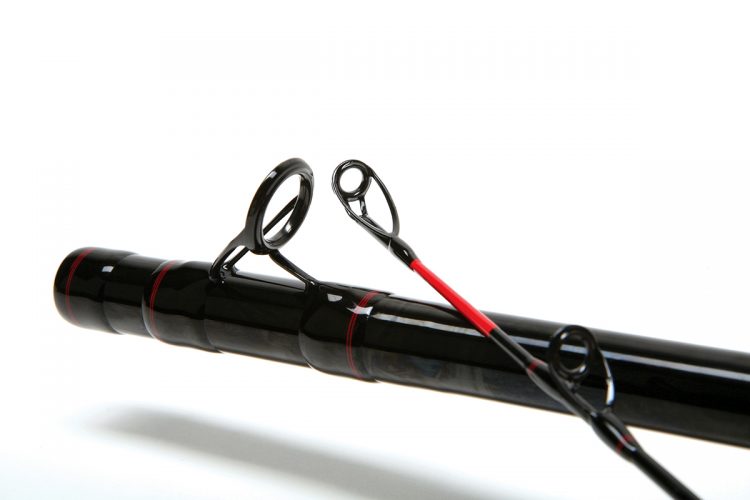 The rod is fitted with high quality Fuji K guides which suffered no damage throughout the year despite my aggressive and sometimes clumsy fishing style, not to mention my storage habits. The Fuji DPS reel seat got a bit sticky on me a few times but I can put this down to my lack of cleaning between some trips. I am quite fussy over my foregrips and although this one is a little small in diameter for my liking it is closer to my usual set up which involves tennis grip wrapping around most standard foregrips, preventing hand cramps.

In all the rod was excellent to fish with, well balanced and light to hold all day long. I usually matched this rod with a Daiwa Saltist LD30 2-speed which is similarly elegant in dimensions and it was an effortless set up to fish with.

However, the most important element of this rod was none of the above, it’s the unique Daiwa X45 blank composition. Without being too technical, it is a different style of layering of the materials in the blank. Essentially this new style of blank almost eliminates blank twist which causes dullness through the blank. Instead all the energy which enters the rod is transmitted through the rod to the angler meaning bite detection is excellent for a rod which can handle massive weights.

As an example, in the Scottish Open in 2016, due to weather conditions one day was spent fishing for ling and cod in pretty poor weather and another was spent fishing for small fish inside Scapa Flow. On both days I used this rod for the main fishing and went from one extreme of fishing 2lb of lead with associated ling spoons and baits to fishing 6oz of lead and mini-size 16 hooks for whiting, cod and dabs of 1-2 inches long. Although I could have pulled more suitable rods from my bag for both conditions, this rod did the job to 90% of the ability of my other rods in both situations. 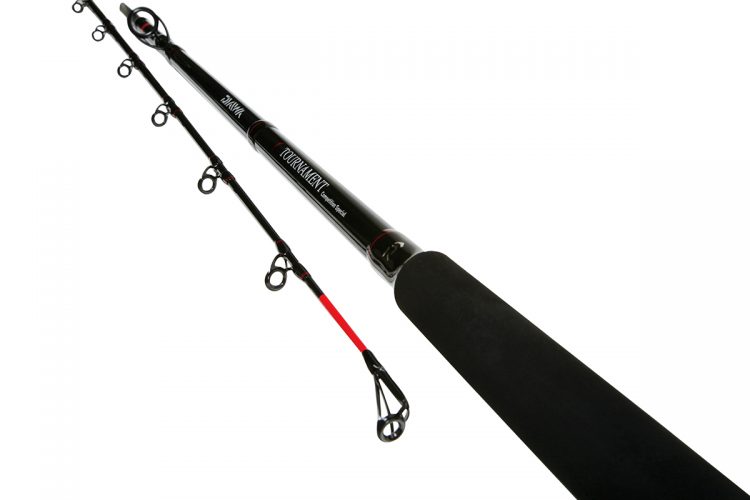 I must admit that I did manage to snap the tip on this rod at the start of the year but I can say it wasn’t due to any deficiency in the blank. I was getting slightly annoyed with a shoal of mackerel and on one particularly aggressive strike I ended up with the rod at around 80 degrees to the water.

Having discussed this with Steve, the rod is more sensitive to abuse than other rods, specifically due to the X45 design not giving the traditional blank twist to dampen overly aggressive actions. However, this is a necessary compromise to achieve the overall qualities of the rod and incidents should only occur when the angler is doing something out of the norm.

As previously stated I found the rod to be exceptionally versatile. Throughout the year, it was used with leads from 2½lb down to 6oz, in depths from 40–400ft, targeting everything from tiny whiting to 16lb spurdog. Although you might normally associate a “Tournament” or “Competition” rod with its highly-tuned abilities for very specific angling challenges I think this rod truly meets the “competition“ standard because of the exact opposite. 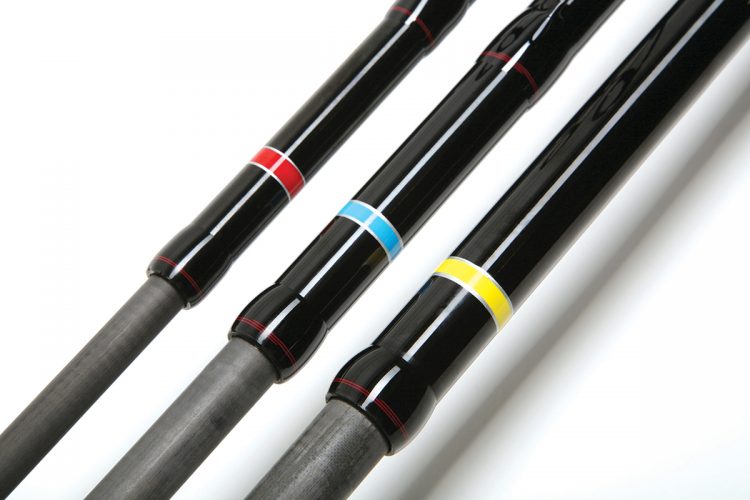 It has the ability to function in almost any type of situation you might meet in U.K. waters, short of hauling in a tuna in mid-Atlantic. There will be better rods for certain situations but as a general downtide fishing weapon I haven’t seen a better rod. I would even suggest that if you attached a fixed spool to this rod, it would make a decent uptide or casting rod. For a man who doesn’t like to change rods through the day and has no desire to purchase a massive range of rods this makes it ideal for me.

I think there are three things that instantly point out to me the quality and adaptability of this rod.

I picked up this rod at the start of the year and never put it back down again for the rest of the year. It would have been easy for me to have a go, not be sure of the rod’s feel and start swapping and changing with other rods I had in the bag.

The majority of Scottish Boat competitions in 2016, its first year on the market, were won using this rod. I had several wins and top Scottish rod Scott Gibson had many more using, almost exclusively, this range of rods.

By a third of the way through the season you could turn up at a competition in Scotland and see over 50% of the anglers with these rods in their bags after seeing them in action for the first time or getting a quick shot of one on a previous trip. 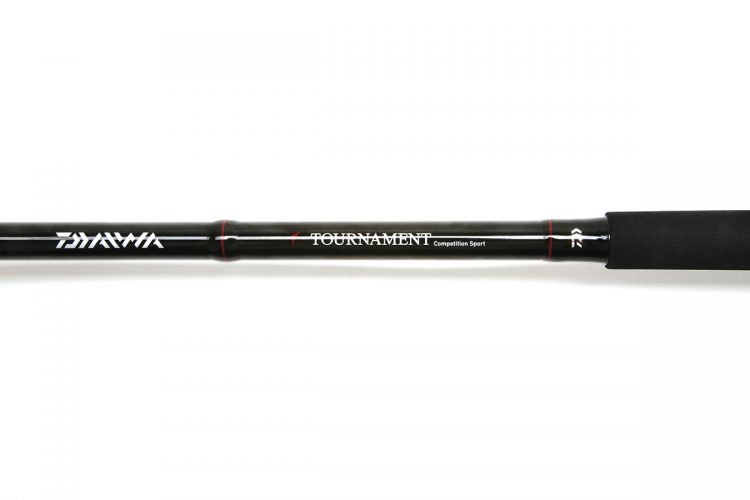 Although the Daiwa Tournament Boat rod maybe at the higher end of the range for the standard UK downtide rod with an RRP of £310, you can find them for under £250, I would suggest it is well worth the money. The rod’s adaptability and performance will actually save you taking several other rods with you and save you cash to compensate for the outlay.

The rod may be labelled as a “Tournament“, in my opinion it is ideally suited to any angler who wants a one size fits almost all situations solution. Overall I would say it is the best all round downtide boat rod I have handled and I have also heard this from several other well respected anglers.

The range also contains a lighter 12-30lb rod which I am told is also excellent, although I have never used it. The last rod in the range is slightly different being an 11ft rod specifically designed to meet the challenges of modern competition fishing which has to date been met by continental rods mainly. Long rods are utilised to cast away from the boat, work around other anglers or provide heightened bite sensitivity for small fish. Although I have had both these rods in my hands I haven’t fished with them so I won’t offer a review myself.

Celebrate the outdoors with the National Fishing Month Silver Jubilee