The weather forecast had been strong north westerly winds for Sunday and Monday meaning the chance of fishing at Trimingham could be out of the question. As always the weather forecasters were wrong, with the wind dropping away early on. The sea state was perfect, that combined with tide times we expected a good showing of fish.

Due to the snags in the first two bays left it was decided to peg everyone from the slipway towards the right, and the majority would be fishing from behind the revetments to start with. Another excellent turnout with 25 anglers on the beach, Tyler Rush, Billy’s son partaking in his first match, welcome mate.

Even with conditions perfect the fishing was slow and some struggled to find a sizeable fish, but taking his first top spot was John Harvey on peg 7 managing to card 11 fish which consisted of eight good sized whiting, two dabs and a rockling giving him a total weight of 4lb 92/3oz. Second podium spot went to Paul Thorburn on peg 23 with 10 fish for 4lb 81/3oz, and final podium spot went to Henry Randell on peg 9 with eight fish for 4lb 3oz.

Biggest round fish of the night went to Richard Hipperson making a welcome return to the club with a bass of 46cm and biggest flat went to Richard Craske with a nice flounder of 34cm. All in all 70 fish were recorded but you can probably double that with the amount of undersized bass returned. Five bass were carded along with 10 flounder and the rest of species caught were whiting, rockling and dabs. 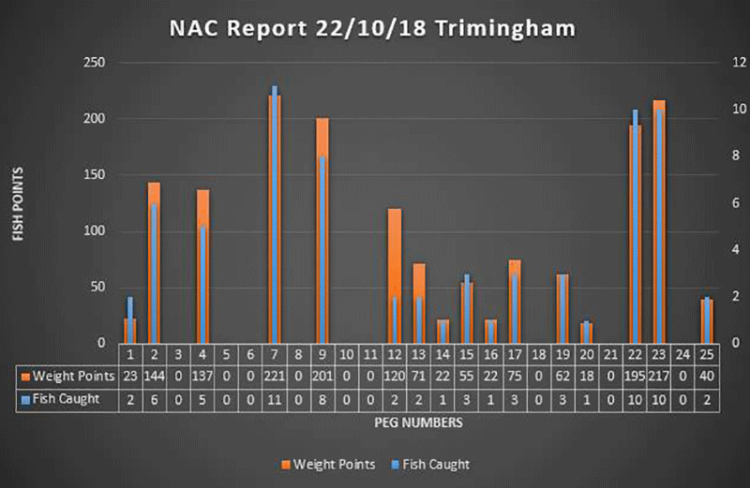 Next weeks match is at Weybourne under the cliffs, this venue can throw up some bigger fish but it can also lose you some gear, do not overcast or you will be in the rough stuff, we are fishing it over high tide so if sea state is not safe we will be fishing to the left. As always please book in early.