The weather has been extraordinarily kind this year compared to the back end of 2009, so as I watched the forecast get better and better towards this week-end I couldn’t resist a last minute trip for a final crack at the Pollack.

I checked the www.deepsea.co.uk schedule pages for a place on a Weymouth boat and was delighted to find that Lyle Stantiford was able to fit me in with a party of individuals. Lyle skippers the brand new “Supanova”, the latest twin hull addition to England’s top charter port. 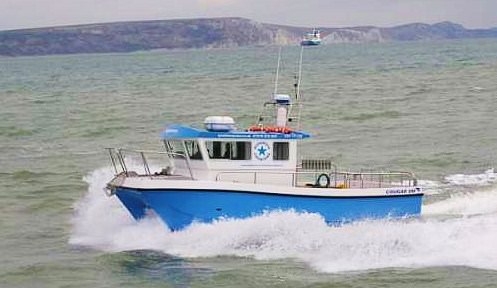 Although this is the first charter boat Lyle has owned he is by no means a novice. Having served his apprenticeship crewing for a number of local skippers, including Chris Caines and Pat Carlin, Lyle has acquired all his relevant qualifications and has spent the last few years working as a contract skipper and “locum”, often for many of the more established Weymouth charter boats. Lyle has also served as a crew member on the Weymouth RNLI Lifeboat for the last three years.

A quick call the night before confirmed that the weather was set fair and that we would meet at the dock at 07:00 for an 07:15 departure. Joining me for the day afloat were Ken from Poole, three lads from Derbyshire and two guys from Christchurch way. With seven on board this boat has a mass of space and even adding an eighth angler would not have made it any less comfortable.

Lyle helped us stow our gear and provided tackle for some of the novice anglers who didn’t have their own. We then had a quick safety briefing covering life jackets, flares, life raft drill and emergency radio communication before slipping our moorings and heading out to sea.

The plan for the day was to drift a group of wrecks some 26 miles to the south west of Weymouth looking for some prime fat Pollack before they started to spawn at the end of March. Supanova made a very sprightly 15 knots plus on the steam out and with a little tuning Lyle expects to get a cruising speed of 16 to 17 knots in the future – enough to rival any of the local charter fleet.

We rigged with flying collars and after my February experience I made sure I had plenty of Mackerel pattern side winders in my bag. These have a red tail and lower jaw and proved deadly for some other anglers on the trip out last month.

On arrival at the first wreck Lyle checked the lie of the structure and the direction of the drift and then set us up for our first pass. The skipper called out each stage of the wreck and just as we came off the highest point and towards the back both myself and another Steve (from Derbyshire) were in to fish – a great start! The result was two Pollack of around 5-6 lbs each.

We were soon starting our second drift. This time it was mayhem! I hooked the wreck but the other 6 anglers all hooked fish which did their best to cross over the lines and drag people in to the wreck.

The fish were soon boated and the tangles straightened and we were off for another drift. We had several more drifts, each producing a couple of fish which kept Lyle busy with the net. The fish were mostly in the 5 to 9 lb range with the odd larger fish thrown in for good measure. Each fish was unhooked by the skipper and put in to the very large ice box that is stowed in a specially designed rack under the centrally positioned bait station. Additional fish boxes were stowed under the deck, and these would soon be brought out as we quickly filled the ice box!

Ken was the first to find a bigger fish. He hooked a cracking double figure fish which took a number of long, surging runs before reluctantly coming to the net. 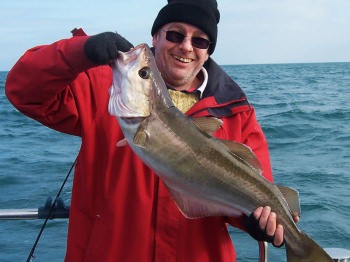 Then, with almost twenty fish on the boat, the sport died away to nothing. We had a couple of blank drifts and the skipper called our lines in and we were off to another wreck. A short steam of around 15 minutes saw us arrive at the wreck of the SS Frigga lying in 60m of water. A quick assessment of the drift and we were starting our first pass.

Sport was again instant with another six way hook up including me this time. James from Derbyshire added another fine double figure fish to the catch. James would go on to be the top rod on the day taking 8 or 9 fish.

The average size of the pollack was a little larger on this wreck, probably 7 to 9 lbs and all the crew managed to catch fish over the next hour or so. My hit rate was improving fast and I managed four fish in four drifts, the largest being around 9lbs. I even earned the dubious honour of landing the first Pouting to be taken on Supanova!

When I was out in February I bemoaned the fact that anglers can stand next to each other on a boat and have very different fortunes, with some catching plenty whilst others catch little or nothing at all. Today restored my faith as everyone on the boat accounted for five fish or more and had plenty of great sport throughout the day. While the action was slower in the afternoon despite trying more wrecks, we were compensated by some stunning weather which, as you can see from the photos of the Christchurch contingent, got better and better all day.

With the third wreck we fished producing only a solitary fish we headed back to the initial mark to try again now the fierce tide had dropped away a little. This produced a couple more nice fish to round off the day. We had an equally quick run back to port on a flat calm sea in the early spring sunshine and were further treated when Lyle rustled up hot dogs for the crew to snack on!

I have often thought in the past that “succession” in the charter industry may be a problem with relatively few new, and genuinely professional, younger skippers appearing each year. Sure, there are the “hobbyists” who come and go but very few who have taken the time to learn their craft from the best in the business and who enter in to a business with as strong a customer focus as Lyle has. He is running a fabulous boat ideally suited to smaller clubs and parties of up to eight anglers and has been meticulous in planning the experience he wants to give to his anglers. On this day, only his second commercial trip on the “Supanova”, he certainly secured the future patronage of seven very happy anglers. With people like Lyle entering the industry our sport looks to be in good hands for the future.

For more information on Supanova Charters have a look at Lyles’ own web site.