At last the first cold snap of the winter hit the Skarnsundet area and local guide Phill Dale decided to take advantage of this to hit the Straumen shore marks.

With temperatures of  -10o C exacerbated by a strong northerly wind sweeping across the fjord the trip was likely to be a short one. The Century E1000 Eliminator and Penn 525 combo were soon set up and a half herring bait pennel rigged on 8/0 Sakuma hooks was launched into the darkness.

A rattle on the rod tip indicated some interest and a small coalfish was Phill’s first thought as the culprit. However when the rod buckled over it was obvious that something larger had grabbed hold. During a short fight Phill was dragged all over the shop as the fish acted as though he didn’t exist. Unfortunately the big fish spat out the smaller hooked fish and the mangled 2lb codling was winched ashore.

A quick re-bait and the lobbed cast resulted in a powerful take and after a furious fight this splendid 27lb fish hit the shore. 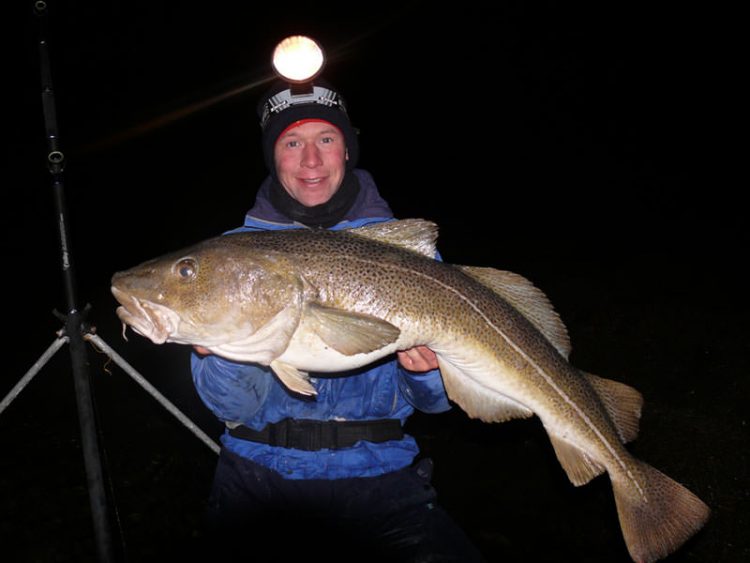 After Phill had stopped shaking he cast another herring baited rig and sat back in anticipation.  With only about quarter of an hour to go before the current was going to be flowing hard for effect fishing the rod tip just slightly dipped. This is the typical start of a big cod bite as it takes the bait, then turns and goes, that’s when you get the slow pull down! A good hard and fast strike to set the hooks and the cod was on. A five minute tussle later and there was a lovely seventeen pounder at his feet, some session!

Phill works with Skarnsundet Fjordsenter  and you can find more info and download the shore fishing brochure on the website at skarnsundet-fishing.com