Next Wednesday Mr Lochhead will be visiting Drummore to officially release the long awaited report into the “Economic Impact of Recreational Sea Angling in Scotland” and to meet with representatives from the local businesses. It is expected that hard copies of the Executive Summary of the report will be available.

SSACN will be hosting a post-launch discussion at the Clashwhannon – http://www.clashwhannon.co.uk/ beginning at 2.15pm after Mr Lochhead goes off to take a trip out fishing (weather permitting). Numbers may be limited so please respond to this email if you would like to attend.

The first Scottish Shark Tagging Programme (SSTP) tagged fish to be recaptured was taken this weekend.

Tag number 835, originally tagged by Ian Burrett in Luce Bay on 28/06/09, was caught and re-released just four weeks later by Stuart Cresswell off the Isle of Whithorn on 25/07/09 – STRUAN as the fish is now called, weighed 34lb and as you can see from the photo was in excellent condition. 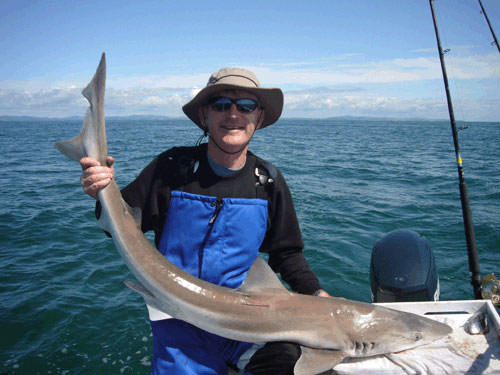