“Pout Doubt” In The Morning, “Bream Dream” In The Afternoon!

Well if last week’s omens looked good, this week’s looked decidedly dodgy.  Despite a good forecast, the morning weather delivered a stiff north-easterly breeze and it was very cold. This was coupled with very small tides which always makes the fishing tough as the often fail to feed enthusiastically without significant movement in the water.  The day was to be spent aboard Dave Pitmans’ excellent Atlanta out of Weymouth in search of Plaice.  A call to Dave the night before delivered the news that the Plaice were few and far between so we would probably try something else.

On board Dave told us that we would be trying for some early season Bream.  Dave had supplied some fresh live rag worm (which being small were an excellent size for Bream fishing), large and party sized squid and some frozen Mackerel.  Dave also had some live Hermit Crab in case we wanted to try over the sand for some Smooth Hounds.

First stop was a reef some five miles from the harbour on the edge of one of the famous sand banks.  We all rigged up with light gear and small hooks and went down for our first shot at a Bream.  The bites were instant for everyone on the boat but we could tell from the lack head shaking and diving that these were no Bream and the first of a mass of Pouting came over the side.

As we started to fish the Pouts off some more species started to show.  First was a Cuckoo Wrasse to the port side of the boat quickly followed by Norman “Pops” Parker showing his phenomenal Dog Fish catching skills with four in quick succession!

As many anglers will know, lesser spotted dog fish is actually an infectious disease and the whole boat started to register these fish. After about 2 hours of landing huge volumes of fish but with not much to talk about we saw the first Bream.  This fell to the bow end of the boat but was quickly followed by this nice fish which was taken by experienced local angler Bill Short. Not to be out done, Bill’s son Sammy was next to catch the target species, but I just continued to register Pouting and another Cuckoo Wrasse. 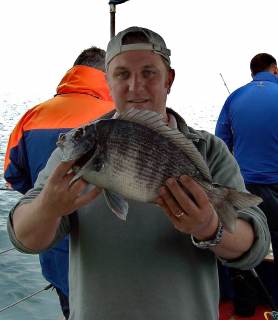 It’s worth pausing here to talk about the Pouting we caught.  Much is made from time to time of the friction between commercial and recreational fishermen (and fisher women).  Many of the Weymouth charter skippers however co-operate with the commercial boats and we kept the Pouting, which do not fare well when caught at depth, to be given to a Pot Boat for bait.  In return the Potters supply the non-commercially valuable hermit crabs that appear in the pots back to the charter boat to use for bait.  It is a pity that this mutual support isn’t reported more often in the press!  Anyway, enough politics and back to the fishing.

As what little tide there was disappeared, the fishing dried up with only a handful of Bream on the Boat.

Dave told us to reel in and we would move off towards Kimmeridge for the afternoon.  After a run of some 5 miles or so we anchored up on another reef.  Thirty minutes of fishing and one cup of tea later there were no bites.  Dave hauled anchor and repositioned us a little closer in to the cliffs.  The effect was instant with a number of rattling bites registered and many squid baits lost.

Jeff from nearby Blandford was next to register a Bream taken on a very small carp hook. With very little tide, and the tendency of the fish to rise off the bottom in these conditions, Pops and I switched to paternoster rigs switching the hooks on the shop bought rigs for size 4 Kamasan hooks.  Baited with small rag worms and slivers of squid we finally joined the action.  Pops managed a couple of Black Bream whilst I started off on a hot streak boating seven fish in the afternoon session.  Four were keepers whilst the other 3 were undersized and were returned to grow a little larger.  The best of my Bream was this nice specimen.

Now I got quite excited about this Bream, as when weighed at sea it registered 3lb 6oz which would have been my personal best by 2oz and would have won me my “Shimano Mission Accomplished” badge for this species.  When weighed back at the quay on Dave’s certified scales however, it registered just 2.96 lbs which is just .04 lbs short of the qualifying weight for the mission – I guess I’ll just have to go back and try again!

In the afternoon Bill Short had added a couple of small Ballan Wrasse to the species tally for the day.  Right at the end of the session he hooked this lovely specimen which weighed 3lb 8oz which rounded off a fairly tough but great day.

Today the conditions were definitely against us, but despite this Dave demonstrated why its’ so vital to listen to you skipper and take advantage of the best options that are available.  We probably had some 20 Bream between the boat, five various Wrasse and a mass of other less sought after fish which kept the rod ends nodding for most of the day. The decision not to concentrate on Plaice on the bank was vindicated when we met another angler in the car park who along with his party had spent seven hours drifting the shambles for a total of five Plaice between the whole crew on the boat.

Thanks to Steve Parker for the report – http://www.madpolka.co.uk