Recent seas were not quite as heavy as expected but conditions brought a few cod inshore and with some mixed bags into double figures. Teesbay area sport hit or miss, with most cod showing close in from low water marks, while piers produced mostly whiting and flatties. Steetly Pier was productive on some tides: Mick Dunn reports taking cod up to 5lb with bigger fish lost. Sport on other tides poor with just odd whiting showing. When the sea was at its heaviest the Pilot Pier produced plenty of whiting, and the Staincliffe and N.Gare produced a few smaller cod.  Not much being reported from the Durham beaches but Sean Hildrew took cod to 3 – 14lb, and whiting to 1 – 05lb in a bag of 18 – 04lb from Horden.  Hendon Wall at Sunderland producing a few better fish. The Wear has small cod in the lower estuary and from Rathouse Corner. Rock edges between Roker and S.Shields for cod to 6lb. S.Shields pier poor but one angler is reported to have taken 5 cod all around the 4lb mark during a midweek session. Steve Brown had 3 cod for 8lb from Shields beach. In the Tyne itself, the Walkway has been consistent with smaller cod and coalfish to crab and worm baits.

Best sport has been from North of the Tyne with unconfirmed reports of a 16lb cod from Newbiggin. Brian Harrison fishing on Tynemouth beach took a cod of 9 – 04lb from Stoney Bottom. Simon Todd landed one of 8 – 02lb from Howick. Nick Robson fished at Crawleys to win a Stagecoach A.C. match with two nice cod for 13 – 03lb – best 6 – 13lb. Garry Tully won the last Newbiggin A.C. match with a bag of 14lb from Amble. A recent Amble A.C. match saw Craig Falkous land two cod for 8 – 04lb – best 6 – 12lb from Swine Dene. Steven Punton had a cod of 4 – 01lb, while Norma Urwin won the ladies section with 4 flounders for 1 – 15lb.

The Seaton Sluice Open on Sunday saw 44 out of 276 weigh in mostly cod with the odd flounder, coalfish, and bass… a poor result considering the previous few days good fishing. Geoff King took the heaviest bag with 4 cod for 12 – 08lb from Cambois; Paul Hodgson had 2 cod from Hartley Skeer for 9 – 01lb; Jim Dobie had a single cod of 7 – 07lb which was also the h.s.f. from Colywell Bay. Geoff King had the second h.s.f. of 5 – 07lb; top juniors were Matthew Holdroyd with a flounder of 1 – 06lb, Andrew James had a flounder of 0 – 13lb, and Lewis Urwin had a flounder of 0 – 08lb. Geoff King and Paul Sample took the team event with 12 – 08lb, with Paul Hodgson and Kevin Davidson were second with 9 – 01lb. 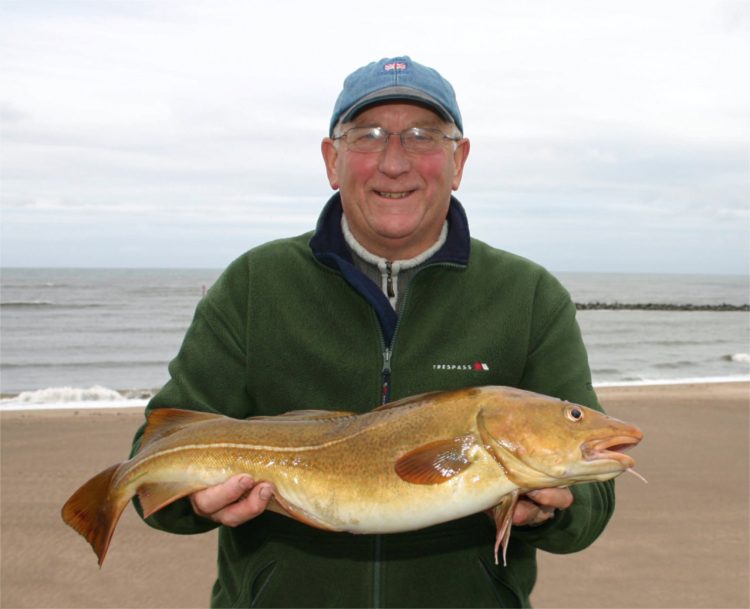 Junior news: Five year old Kirsten Wealleans took two whiting and a pollack of 1lb from North Shields fish quay on her first trip. 14 year old Adam Edgar fished Lynemouth beach to take the heaviest fish and heaviest bag in Bedlington Stations match with a cod of 4 – 07lb, and an eel for a total of 5 – 06lb.

Seaham A.C. juniors fished the Hall beach for the Mayors Cup on Saturday. Steve Dixon was the best of 9 juniors with a plaice of 0.73lb. The Seaham John Wylie Open on Sunday saw 12 out of 84 weigh in 18 cod, 1 flounder, 1 eel, and 1 whiting.  Steve Williams fished the Chemical Beach to land a winning cod of 5.5lb; Chris Hossack had a cod of 4.44lb; Ian Thompson had 3.81lb. Steve Williams and Ritchie Carr won the team event with 4 cod for 11.13lb, with Chris Hossack and Neil Cutler were second with 8.83lb.

The Ryhope h.s.f. Sweepstake saw 46 fishing with everyone taking size fish. Gary Pye won with a cod of 2065 grammes from the Manholes; Steve Dent had a cod of 1155 grammes from the Targets; Darren Tipling had one of 1140 grammes from Hendon; John Lovett had one of 1045 grammes from Seaham Hall Beach. The Ryhope club match on Sunday saw 102 fishing with 34 weighing in. Wayne Harriman fished the High Ledge to land 3 cod, 3 flounders, and 1 coalfish for 3.77kg; Joe Wilton had 5 fish for 2.07kg; Scott Brown had 4 fish for 1.97kg. Stan Longhorne had the h.s.flatfish of 0.51k; Keith Bell had the h.s.roundfish of 1.68kg; top junior was Mason Burton with 0.78kg.