Good numbers of cod in the 5 – 8lb mark range from all areas. Double figure cod still evident from several areas and this winter looks like being a good one for quality fish. Horden beach produced specimens to 13lb last midweek. Best reported was a huge cod of 17 – 01lb taken by Lance McVey from the Wherry on a whole rockling bait. Shaun Wind had a 10lb cod from Roker Pier on lug and rag; Dave Dow had cod to 7lb from King Edwards Bay; Marty Elliott had cod to 8 – 13lb from Browns Well; and Dave Cruddace had cod to 8 – 04lb from Cambois. 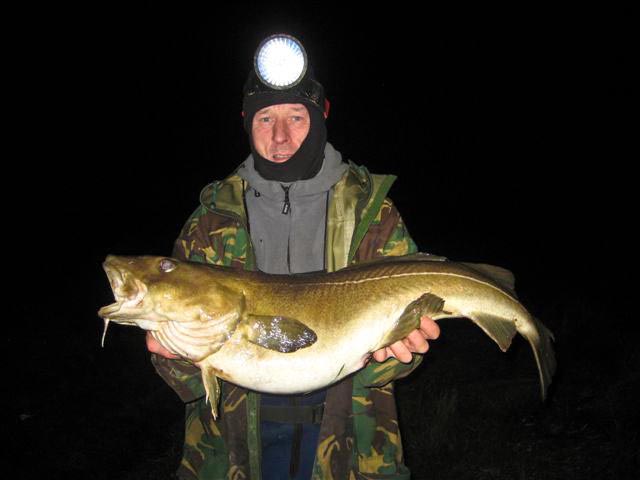 Quality whiting also evident in large numbers from all of the clean ground mark, with specimens nearing 2lb taking worm, squid, and mackerel baits. Well conditioned winter dabs also evident in increasing in numbers, with some around1lb. There have been plenty of mixed bags of 20 plus fish from marks such as Steetly Pier, the Durham beaches, Roker Pier and S.Shields Pier.

Shore sport over the weekend fell away due to small tides, but there were still small cod, whiting, and flatties showing from most areas.  Steve Bruce only needed a single cod of 1 – 10lb from the Tyne to win the last Cleadon A.C. match, while Peter Stewart won the last Tynemouth A.C. match with a single cod of 2 – 03lb from Blyth Beach.  Night catches proved slightly better than those in daylight.

Rays Bream are making a re-appearance this winter with several  of these large pirhana-like fish reported washed up on local beaches. Little is known about them but it seems they get stranded for some reason as they migrate South via the North Sea.  They have not been seen in large numbers since the mid seventies, but if you can get a live one before the seagulls get to it they are superb to eat!

East End and Hendon fished Sunday with only two catching fish. Gareth Gardner had 6 fish for 3 – 02lb, and Barrie Robson had 2 for 2 – 04lb.

Redcar Navy and Gentlemans Club had two recent matches. The first saw 3 out of 17 weigh in. John Nixon fished Port Mulgrave to land a cod of 8.09lb; Dave Allinson had a cod of 1.08lb; and Gary Joyce had one of 1.07lb.  In the second match, Frank Harrison won with a single cod of 5 – 02lb from Saltburn Pier.

Coming up: Sunday December 14th is the Saltburn Open fishing between Paddys Hole in the Tees to Whitby East Pier from 9am till 1pm. Basic entry is £6 plus additional pools and team event.  Register from 7.30am at the Ruby Street Social Club Saltburn from 7.30am. First prize is £300 plus ladies and junior prizes plus a supporting prize table. Contact Bernard Westgarth 01325-720113, or Peter Race 01642-478351