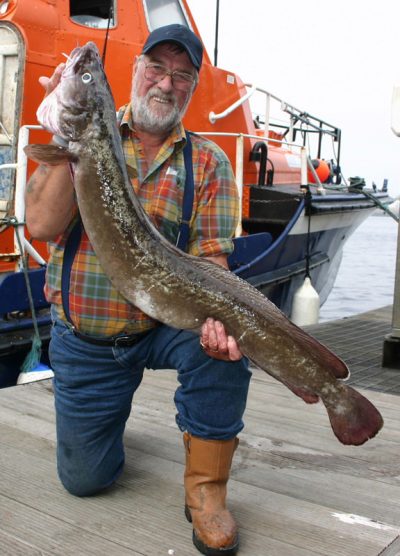 Boats: Little boat activity reported in the Teesbay area this week. However, Bob Coates reports a productive midweek trip on Maggie May, with good numbers of cod and ling.

There have been some quality fish from the North of the region. Jason Bainbridge caught a superb 30lb ling on Swordfish out of the Tyne which is the biggest reported so far this season. Brian Stewart (pictured right) had another ling of 26lb on the Sarah JFK, also out of the Tyne. Alan Burdiss bagged an 18lb ling on the same trip.

Norman Turton had a cod of 15lb on Highlander, Sunderland, with good numbers of double-figure ling and pollack and a few catfish on the same trip.  Amble boat Warlord reports good numbers of smaller codling in the 2lb to 6lb range on the inshore grounds. Kayak angling is becoming very popular, with increasing numbers of anglers practising this method. Latest kayak reports tell of plaice, mackerel, coalfish, wrasse, and cod catches close inshore around the Whitley Bay area.

Shore: With the sea settling, the swathes of loose weed have dispersed and mackerel are again in inshore evidence, with small bags reported from most of the region’s piers. South Shields pier on top form, producing better numbers of mackerel, as well as coalfish, pollack, and odd cod incidentally to mackerel lures. A pollack of 8lb also last midweek. Bait fishing producing coalfish, plaice, dabs, small codling, and whiting. Ragworm best.

Mackerel numbers should increase throughout the region if settled conditions persist. Shad have also been reported from some venues and are usually on lures intended for mackerel.  These fish resemble a large herring with a deeply forked tail and large scales which displace easily.  The Allis Shad and Twaite shad are identifiable from the number of gill rakers: Twaite have 40 – 60, while the Allis has 90 -130.  Both are protected under several European conventions and are currently protected under Schedule 5 of the Wildlife and Countryside Act (1981), section 9(1). It is an offence to intentionally kill, injure or remove either species.

The rivers Wear and Tyne continue to produce flounders, eels, coalfish, plaice, and codling in varying numbers, with the Tyne producing best lately. The second match in the three match league competition between Cleveland Police, The Tackle Box, and Hartlepool Pirates was fished at the Copthorne Hotel in the Tyne.  Hartlepool A had 24 fish for 696cm; Hartlepool B – 24 fish for 639cm; Cleveland Police -19 fish for 486cm; Tackle Box A – 9 fish for 239cm; and Tackle Box B – 5 fish for 129cm.  Individual winner was Bill Bradley with 340cm. Jason Tinham tallied 202cm, and Chris Ray 176cm.

The NFSA junior open fished on the Tyne last Sunday producedgood sport with flounders, coalfish, and eels. 17 rods weighed in 59 fish, and all entrants received prizes. Jim Dobie’s grandson, Jack obviously picked some tips up from his grandfather to win with 17 fish for 5790 grammes. Robbie Gee caught 6 fish for 2700 grammes, and Josh Swaddle was third with 7 fish for 2100 grammes.

North of the Tyne, pollack, coalfish, cod, and wrasse showing from rock edges between Newbiggin and Eyemouth. Bob Ferguson won a Whitley Bay AC match with 2 cod for 7.9lb – best 5.95lb, taken from Seahouses. Geoff King had 2 cod for 6.35lb, and Michael Clark had one cod of 4.25lb.  I also have a report of an angler taking a 40lb plus bag of cod and wrasse on fresh crab from an Eyemouth mark during a recent session. Most were fish returned alive.