Mackerel moved inshore in reasonable numbers early last week with most of the regions piers producing bags of up to 20 fish on lures. Lures should take most of these early fish before float tackle becomes more productive later in the season. Steetly, Roker and South Shields piers have been the most productive, but even the more sheltered piers such as the Pilot pier at Hartlepool have all produced at least a few fish. There are plenty of sprat shoals present to keep the mackerel inshore but this is much dependent upon the weather as any northerly sea will soon push any mackerel offshore again.

At other times anglers who are bait fishing from the beaches and piers have taken the usual various flatfish species with some nice sized plaice to 2lb now showing. The Wear has improved slightly with flounders the main species, and the Tyne continues to produce flounders from the upriver marks and mainly small cod and coalfish from the lower marks. Crab is now essential when fishing the rivers but the odd fish will still take worm baits.

The Ryhope Tuesday evening sweepstake saw 32 fishing the Wear where some bigger flounders are starting to show at last. In zone A Mick Davison won with a flounder of 1lb 3oz. Eddie Softly had one of 1lb 2oz and there was a tie for third place with Paul Richardson and Joe Gibson each on 1lb. Zone B saw Gary Warwick win with a flounder of 1lb, Darren Robinson had 13oz for second place and Steve Elliott in third had 12oz.

The Ryhope club match on Sunday saw 34 fishing at the Copthorne hotel in the Tyne. Joe Wilton won zone A with 6 fish for 132cm, in second Ken Hailey had 109cm with  John Surtees taking third with 103cm, including the longest in his zone of 39cm, and Paul Howard had 101cm for fourth. In zone B Paul Richardson had 7 fish for 181cm to take top spot followed by Bob Surtees who had 150cm. Third place Paul Riley had 95cm and Joe Lemon had 89cm for fourth. Gary Warwick Jnr. had the longest fish at 35cm and top junior was Jordan Lowes with 2 fish for 67cm. 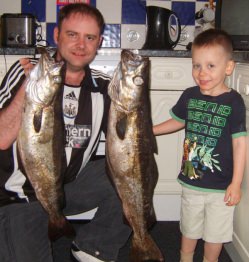 North of the Tyne shore sport is also improving with some nice pollack reported from Eyemouth and St. Abbs. Kevin Cruddas fished St. Abbs and took two specimen Pollack of 9lb 2oz and 7lb 2oz on jelly worm. Daryl Taylor won a Seaton Sluice match at Berwick with two wrasse and 1 cod for 7lb 5oz including the joint heaviest fish with Nigel Gemmel of 3lb 4oz.

Boat angling has improved in the north of the region. Darren Reilly fishing on the Delta Barbara out of Sunderland landed the biggest ling so far this season with a fine specimen of 22lb. The Sarah JFK out of the Tyne has also had some productive trips. Tony McKenzie had a ling of 16lb 8oz and a pollack of 10lb 10oz. Mark Teasdale had a cod of 14lb 8oz and Paul Johnston had a ling of 17lb. The Danse De Laur out of Blyth has been taking over 100 fish a trip from the inshore grounds with the best cod around the 6lb mark. Private boats out of the Tyne are also finding fish. Kenny and Bert Gray, and Keith Brown aboard the Boys took 33 cod to 7lb, and Norman White and Tony Gray on the Slinky Kate kept 10 cod to 7lb. Richard Roll took his boat Stingray out with a few friends and they kept 30 cod and ling around the 4lb to 8lb mark. Mick English and Paul Marwick on Mick’s boat Wavedancer out of Amble had 18 cod in the 3lb to 5lb range, and Mick also had a pollack of 6lb 8oz all taken close in on the hard ground. Walter Turnbull and Paul Conroy on Walter’s boat Charlotte out of Burnmouth kept 30 cod to 10lb and ling to 15lb amongst lots of released smaller fish.

On Sunday, June 21 the Friarage small boat fishing competition is being held out of Hartlepool. Vessels may leave the harbour from 7am. Entry is £20 per person with a full payout. Prizes are for the heaviest single fish, which must be gutted, and there will also be a raffle. Entry money must be paid by close of business on Saturday June 20th. Further details from the Friarage Tackle and Bait Shop, The Headland, Hartlepool. 01429-273145