Both shore and boat angling have improved over the last week with mackerel moving inshore in good numbers and increasing numbers of cod showing from the inshore ground marks. Boat anglers are also taking large numbers of whiting, plus some quality pollack and coalfish. Gary Walker had a pollack of 16lb, and Jason Brown had one of 12lb, both fishing an undisclosed inshore mark off Sunderland. The Brenmar Rose out of Sunderland had cod to 5lb, mackerel, coalfish, and wrasse fishing off the Whitestones. Other boats out of Sunderland have had good numbers of cod to 5lb from the rough ground off Whitburn.

The Sarah JFK out of the Tyne has had up to 70 fish per trip including ling to 14lb and cod to 12lb. Richard Roll on his own boat Stingray out of the Tyne had a nice cod of 19lb 2oz. Keith Miller had a cod of 12lb on the Boys, and son Gordon on his first ever trip had cod and ling to 6lb. Mike Roper and son Paul had cod to 9lb fishing just off Cullercoats. Eric Craven on the Warlord out of Amble had a cod of 20lb, and the Bon Amy from Craster reports large numbers of cod around the 2lb to 3lb mark, plus pollack and ling, close inshore. Walter Turnbull, Paul Conroy, and Joe Riley on the Charlotte out of Burnmouth had over 100 cod between 2lb and 3lb, mostly returned. All boats report quality mackerel over the 2lb mark.

At Hartlepool, the Friarage Boat Angling sweepstake saw a good turn out of 34 anglers fishing on 8 vessels with some nice cod between the 5lb and 12lb mark showing from the hard ground to the East. Several Pollack to 9lb were also taken. The top prize went to Lee Atkinson on the Artimus with a cleaned cod of 10lb 13oz, Neil Wilkinson had a cod of 9lb 14oz on the Danny Boy, and Colin Clarke had one of 9lb 3oz on the White Warrior. Colin continued his good day by taking first prize in the raffle, winning a flotation suit. There will be another sweepstake on July 26th-more details later.

The upper Tyne is still the hotspot for match anglers with the Copthorne Hotel producing plenty of fish. Ragworm and mackerel seem to be producing more fish than crab baits lately. Monday night saw a Rutherfords Conoflex sweepstake at the Hotel. Colin Bell won zone A with 13 fish for 280cm, Neil Cutler had 10 for 234cm, and Ken McCoy had 9 for 200cm. Alec Harvey won zone B with 14 fish for 315cm, and Chris Stringer and Andy Rutherford tied, each with 8 fish for 176cm.

The Eastenders sweepstake on Wednesday was moved to the Copthorne Hotel instead of the Wear and most of the 28 anglers fishing had good results. Barrie Robson was top rod with 13 fish for 282cm, Gavin Owen had 10 fish for 213cm and second place followed by Colin Bell had 10 for 210cm and Lee Hunter had 9 for 197cm.

The East End and Hendon sweepstake on Thursday also moved to the Tyne, this time to the Business Park with 14 out of 21 landing fish, mainly flounders, whiting, and eels. Bob Gascoigne won with 10 fish for 221cm with Dave Mould in second with 9 for 207cm, and Colin Bell third with 8 for 197cm. Joe Gibson had the longest fish with a flounder of 37cm.

Paul Hague took his son Callum on his first fishing trip and what a day it turned out to be for the three year old. Fishing at Hebburn, Callum landed a flounder of 1lb on his second cast and on his next cast another of similar size. His dad Paul saved face by landing a codling of 2lb 6oz, however Callum had the last word “dad you aren’t very good aren’t you not”. 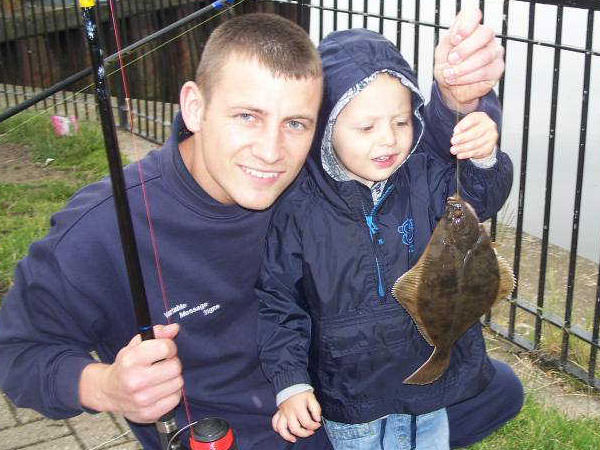 There are still a few better fish in the Tyne and Phil Gee fishing the lower estuary had a nice summer cod of 6lb.

The Wear has also improved slightly with the Business Park a popular venue, but results are still unpredictable.

Sunderland S.A.A. also saw the Wear being unproductive with 3 out of 10 weighing in single flounders each. Bill Gamblin had one of 14oz, and Alan Morley and Paul Robinson tied on 12oz.

Those fishing the open beaches and piers have taken the usual various flatfish species with some nice plaice amongst them, whiting are showing on late evening tides, the odd small bass are also showing, and wrasse are present from localised rough ground marks. The Seaham junior match on Saturday saw Kieron Newton win with a dogfish of 2lb, and Emma Wharton had a flounder and a pouting for 10oz.

Sunday July 12th sees the Bob White Memorial Open fishing from 11am till 3pm between Seahouses South Pier to Lynemouth Pipe, excluding Amble Pier and the rivers Coquet and Aln. This is a Penn points match. Basic entry is £10 for adults and £1 for juniors fishing in two age groups, under 8 years, and 8 years to 16 years. Register at the Amble Angling Centre, Newburgh Street, Amble, (01665-711200), from 8am. Prizes are for heaviest bags and heaviest fish depending on entry. Weigh in at The Radcliffe Club, Amble, from 3pm till 4pm.