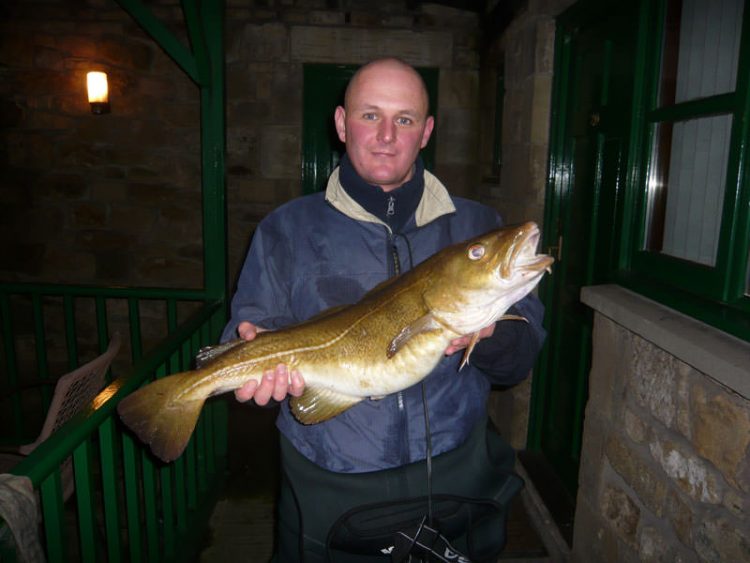 Shore sport remains patchy despite the favourable good conditions but there are a few decent cod to be had for those in the right place at the right time. There are also good numbers of quality whiting showing on some tides. Dave Porter had a specimen personal best cod of 11lb 2oz in a recent Blackhall match. Elsewhere Brian Harrison had a cod of 11lb 10oz from Tynemouth beach and John Topliffe had a cod of 11¼lb from Rathouse Corner in the Wear. Lee Burton racked up another splendid double figure specimen with a 13¼lb fish from the Targets. Lance McVey had one of 10½lb from Marsden while Noel Blockley topped a four fish bag from Newton with a cracker of 11.60lb, all his fish were returned. Scott Howie fishing an Amble match weighed in three cod for 13 14oz with the best banging the scales down at 10¼lb. South Shield pier also fished well early last week and among the successful anglers Alan Scott had cod to 9¼lb, Gav Brennan had cod to 9lb 3oz and Andy Shagganis had fish to 8¾lb.

Steetley pier at Hartlepool, the Durham beaches on the flood tide and the rock edges north of the Tyne remain the most productive marks to fish. The rock edges around Craster have produced plenty of cod and one angler is reported to have hooked one of the region’s scarce monster conger eels estimated at around 40lb. The fish was brought to the rock edge and remained on the surface for several minutes, the angler being unable to land it before it broke the line. Quality winter flounders are now starting to show in numbers both from the rivers and beaches, most are around the 1lb mark but Joe Wilton had a monster of 3lb from the Wear during a recent midweek session.

Hartlepool W.C.S.A.C. fished last weekend and found in size fish scarce with only two weighing in. Steve Brown had two cod for 6lb 6oz and Marc Wallace had a cod of 5lb plus a dab for a 5¼lb total. Next match is Sunday January 31st fishing from 1pm till 6pm.

Staying in Hartlepool, the Friarage Tackle Friday evening heaviest fish sweepstake saw some nice fish landed from Steetley pier where Barry Pattison massacred the opposition taking the top three places with cod of 9lb 5oz, 5lb 15oz and a whiting of 1lb 10oz; winning a handy £150, all caught on yellowtail lug and squid head supplied by the Friarage shop. This match is expected to be a regular event, contact John Readman at the shop on 01429-273145 for details.

Hartlepool O.M.A.C. fished the next day with fourteen out of nineteen weighing in forty-five fish for 37½lb. Dean Athey had the top bag with a mixture of cod and whiting for 9lb 3oz, including the heaviest fish; a cod of 4lb 6oz. Dave Sanderson in second weighed in a mixed bag for 4½lb while third placed Steve Sweeney had 4lb 1oz. Brian Crowe and Jay Kelly tied for the second heaviest fish with cod of 1lb 10oz and Dave Clarke took third with a nice whiting of 1lb 7oz. The club have a meeting in the Pink Domino on Saturday February 6th at 7pm.

The Ryhope Tuesday evening sweepstake saw fish come from a wide area. Mick Davison won with a cod of 2lb 13oz from Featherbed Rocks and runner-up John Lovett had one of 2lb 1oz from Hall Beach. Third placed Darren Welsh had a fat specimen winter flounder of 1lb 13oz from the Wear.

The Ryhope club match on Sunday saw most anglers struggling in the small tides, with only ten out of the eighty-five entrants finding fish. Steve Harriman was top rod with a cod of 2815 grams taken from the Targets, his only bite of the match. Lee Burton also fished this mark and had two cod for 1545 grams to take second. John Wilson fished the Tyne Walkway to land a cod and coalfish for 1435 grams for third spot. Gary Dunn had the heaviest flatfish with another big winter flounder of 1lb 11oz from the Wear and top junior was Thomas Rutherford with 330 grams.

Cleadon A.C. also fished early last week and struggled to find many fish with just three out of the twenty-nine who fished weighing in. Paul Wastell had a nice cod of 6¾lb from Whitburn to finish ahead of Neil Cutler in second who had a cod of 2lb 6oz from South Shields pier and third placed Stephen Brown who weighed in a cod of 2lb 12oz from Tynemouth.

North of the Tyne Seaton Sluice A.C. had a good weigh in with nine out of fourteen finding fish with first placed Dave Hood landing three cod for 11.5lb. In second Barry Tweddle had three for 11.00lb, best 6.20lb and Mal McIntyre followed with three for 6.10lb.

Tynemouth A.C. fished Sunday with fifteen out of forty-eight finding fish. Steve Harper led the field with two flounders and a cod for 2lb 15oz. Norman Douglas finished second with a single cod of 2lb 7oz and Wilf Reed in third had two whiting for 2lb 5oz.

Tynemouth A.C. retired members fished early last week with seven out of fifteen having an all cod weigh in on Tynemouth pier. Dave Bentley had four weighing 8lb 15oz, best 3½lb, to take first place ahead of Tony Taylor who had three for 4½lb. Taking third place Arthur Smeaton had two for 3lb 15oz.