With continuing south easterly winds putting plenty of movement on the sea again for most of last week, sport continues to be very good with plenty of cod from the piers, rock edges, broken ground and clean beach marks. Results have generally been better after dark, particularly from the clean ground beaches at Blyth, Druridge Bay, and from the various marks around Amble, and club results have seen increasing numbers of flounders showing in mixed bags with the odd better bass among them.

The Tyne offers comfortable fishing and has seen the odd better cod to 5lb landed among lots of smaller specimens which seem to be resident all along the rivers tidal range. Hartlepool Middleton pier produced a few cod together with increasing numbers of quality whiting and Bob Coates reports landing cod up to 3lb and whiting to 1lb 8oz. The Staincliffe, Parton beach and Crimdon have all seen at least a few cod landed, but as with most beach marks lately, the best results are after dark. If you fancy a trip away, then the Arbroath area and other marks around the S.E Scotland shoreline are fishing very well at present, and offer the opportunity of some spectacular cod sport with visiting North East anglers reporting cod to 15oz with lots of specimens around the 5lb to 8lb mark in some bags of over 40lb.

Newbiggin S.A.C. has had a few recent productive matches. The first produced 41 cod, three flounders and a bass with 17 out of the 24 anglers weighing in 101.14oz. Winner Joe Lindsay had four cod weighing 13.15lb from the Green Skeer just ahead of Gary Tulley whose five cod totalled for 11.13lb from Boghall, and Rob Thirlwell with four cod for 11.9lb from Hadston. Gordon Scott had the heaviest fish, a cod of 5.10lb from the Green Skeer. 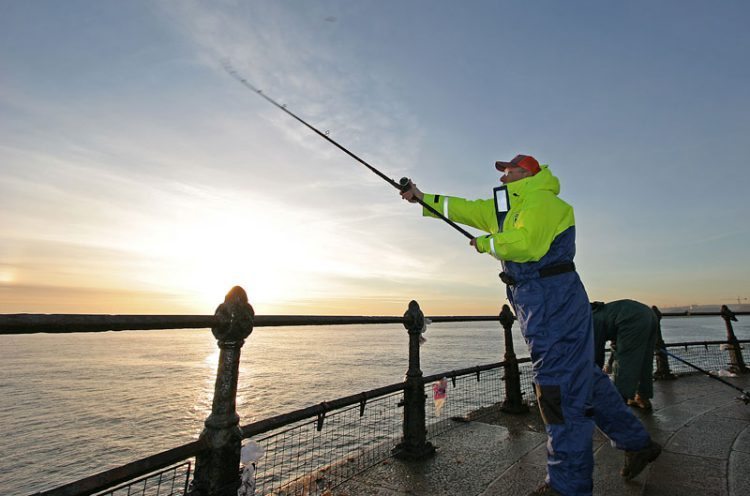 A Bedlington Station match hit the conditions just right in a south easterly sea and produced 35 fish for 73.11lb. Shaun Brannon had a superb bag of 19 cod totalling 35.9lb, way ahead of S. Surtees with six for 9.5lb, and Callan Stevens with two weighing 9.3lb, the best at 5.12lb.

A Whitley Bay A.S. match saw some typical mixed bags weighed in with cod, whiting, flounders, and bass all coming to the scales. All of the top bags came from Blyth where Kev Burton had nine fish for 9.11lb which included a nice bass of 2.14lb for the heaviest fish Chris Stringer had seven fish for 7.15lb, and Paul Brown had four for 7.3lb.

A B.O.T.A.C. retired member’s match also saw a mixture of species with lots of small but in size cod showing among coalfish, whiting, dabs, flounders, and pouting. Tony Anderson won with eight fish for 8.5lb, Bob Gascoigne had nine weighing 8.2lb, and Phil Smithson had five for a total of 5.15lb. Barrie Sanderson had the specimen fish, a monster pouting of 1.10lb. A few days later and the cod were back for a B.O.T.A.C. winter league match with 10 out of the 18 fishing finding fish. Tony Anderson won again at Blyth with three cod, three whiting, and one flounder for a total weight of 8.85lb, Alan Woods had two cod for 6.11lb, the best 5.5lb, and Phil Skinner had three cod and one whiting for 5lb. Most of the fish came from Blyth; other notable fish were a cod of 4.15lb for Dave Milne and a cod of 4.14lb for Paul Forster.