Navionics, one of the leaders in electronic charting for the recreational boating market, announced today the latest advancements of its revolutionary community-sourced charting initiative, SonarCharts™. It operates in a similar manner to Olex, used on many commercial fishing vessels, by building up the chart detail over time.

The first and only survey process of its kind, SonarCharts leverages the logging function on the sonar units used by Navionics’ extensive community – currently submitting hundreds of thousands of charting improvements per year. Available on Navionics Platinum and new Navionics+, SonarCharts is a separate high-density bathymetric layer that can be easily toggled on and off depending on user preference. With very little effort, users can upload their sonar logs to Navionics and reveal incredible bottom detail that builds even better local charts for their area.

Gathering can be done anywhere with the basic sonar equipment most boaters already own. Uploaded data is processed by Navionics and integrated with other data sources including official chart updates and sonar logs from other boaters. The SonarCharts layer is downloaded with Freshest Data, which also includes updated Nautical Charts and Community Edits, available free for a year with most chart purchases. SonarCharts is viewable on Humminbird, Raymarine, Lowrance and Simrad Yachting chartplotters. Navionics customers who own Navionics Gold, Silver, HotMaps Premium, and Marine & Lakes USA can access SonarCharts by using the new Navionics Updates chip. 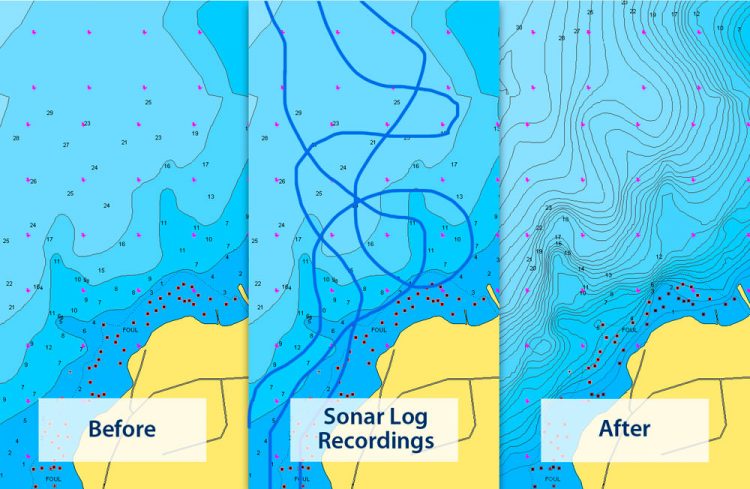 “Customers consistently ask us ‘how can I get more detail for where I go’ because they’re most interested in the waters where they spend their time boating and fishing,” said Don Black, global vice president of sales and marketing, Navionics. “SonarCharts™ allows them to benefit from regular map updates, and takes it one step further by facilitating the charting of areas that are most important to them. We are thrilled with the enthusiastic participation we’ve seen from the Navionics community.”

An extraordinary step forward in the collection and propagation of reliable bathymetric data in both fresh and saltwater environments, all Navionics users who have access to a sonar device can contribute content that enriches SonarCharts™ as well as the boating experience of all members of the Navionics Community. Individual sonar logs can be uploaded online at navionics.com. Updated and revised charts are made available in as little as 24 hours.

“It can take years for official charts to be updated,” continued Black. “Coastal areas that have undergone significant changes due to events such as dredging and storms, as well as lakes that have never been mapped, can be updated quickly, easily and most importantly, with the precision boaters expect from Navionics cartography.”

Navionics SonarCharts™ functionality is free to all users of existing Navionics charts that are eligible for Freshest Data, and included at no cost with eligible new chart purchases. SonarCharts™ will be available soon for Navionics Mobile apps and WebApp. For more information on SonarCharts™, compatible chartplotters and smart devices, or to learn more about Navionics and its entire product line, please visit www.navionics.com.