With the first leg of the Leinster League Closed Gold Boat, run by Balbriggan SAC, deemed a huge success, the second leg had a lot to live up to. This was the first major event run by the Eastern Command SAC, a club formed by members of the Defence Forces.

Eamon Hayes was the point of contact in Kilmore Quay, Eamon, skipper of the Autumn Dream, made life easy for the organisers by securing enough boats for the competition and he even had Joe Byrne of Courtown Angling Centre bring his boat, The Brazen Hussey, round for the weekend.

Dave McBride in Southside Angling hosted the boat draw from his shop on the Thursday and we even managed to bring a smile to his face with tackle purchases. Fortunately, for us the 7th of July saw the start of the fine weather and with a cloudless sky, soaring temperatures and a gentle sea breeze it had all the makings of a great days angling.

As the anglers started to arrive for check in, most had already seen the boat draw on the Shamrock Fishing Tackle Facebook Page, which helped things run smoothly. This was a “bring your own bait” event and anglers were restricted to using ragworm and mackerel only. Thankfully, the skippers had notified us well in advance that mackerel was in short supply and with only two caught for the day it was necessary to have your own supply.

As the angling got underway, some of the big guns were drawn together, Namely Terry Boyle versus Shay McDonnell, Liam O’Callaghan versus Myles Howell, Mick Barry versus Joe Byrne and Paddy Swan versus Brian Whelan. It was apparent that these match ups would ultimately decide who the top finishers on the day were going to be and also bring the anglers one step closer to making that coveted Leinster boat team and collecting the Gold Medal.

The fishing on the day could only be described as awesome, with some 1877 fish coming to the measure of 25cm, made up of 10 different species mainly pollack, ballan and cuckoo wrasse. This averaged out at over 40 fish per angler. The anchor sessions proved more fruitful, mainly down to the use of the long rods including those from Artico. The new scratching rig from Cox & Rawle landed Martin Kennedy of Shamrock Tackle, the main sponsor of the event, a fine, specimen ballan wrasse. 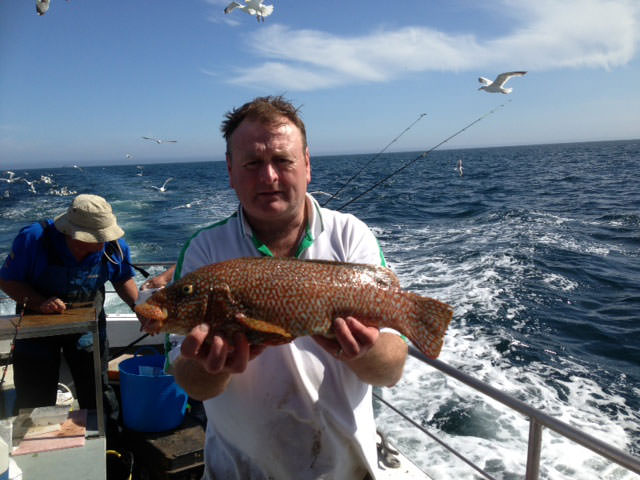 As the day ended and the boats made their way to the harbour, we were met by the crowds that had flocked to the small picturesque village of Kilmore Quay. The village was hosting its annual festival and the town was buzzing with candyfloss and ice cream in the kids’ hands, while the parents were skipping around all the wonderful stalls. This made the usual banter between anglers more challenging as they tried to suss out who had won.

It was not long before the results were completed, with four anglers finishing on top marks, separated by a count back, and finishing in the following order.

With the final leg of the closed boat league being fished on August 17th all eyes will be on Terry Boyle as winner of the first two and who has been placed as hot favourite to captain the Leinster team in next year’s Findlater Cup.