This week the Lancashire sea fishing has been very up and down with some tides being very productive throughout then the next tide not producing much at all.

We are still seeing smoothhounds, rays, plaice, sole, dabs and flounder being caught regularly. Rag worm and black lugworm are still the most productive baits at the moment.

Andy Denton had a very good session with Mick Parkin at low water the other morning. Plenty of hounds, including a personal best for Andy of 12lb 14oz and one just short of 8lb for Mick.

Dave Brown fished at low, not the best wind conditions. Dave had a lot of tope pups and a few dogfish but did latch into something better on his second cast with a pair of nice rays best just over 6lb. 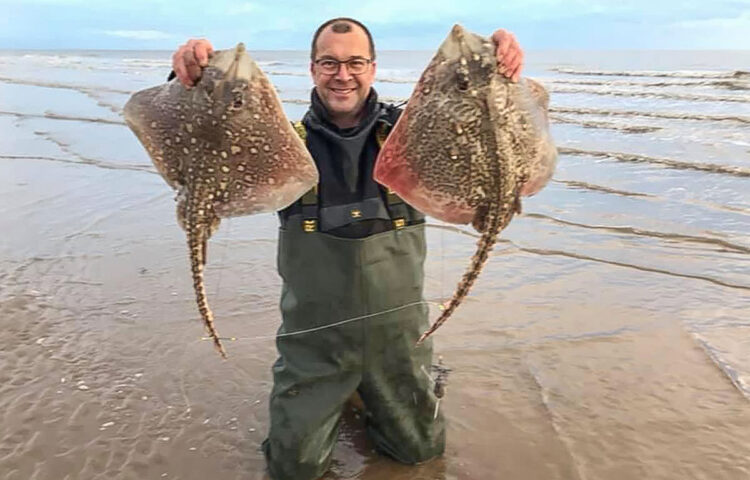 Allan Cordwell had an early start that saw his boy Mathew and himself boarding the Blue Mink at 06:00 along with Dave Tommany, Carl Dady, Stephen Lavelle and Mark for another trip that had been booked over a year ago in the depths of Covid lockdown.

Although there had been a couple of days of settled weather, the large tide pushed us off the big fish marks. Mackerel were sparse but Mathew managed to nail enough to go chasing the tope. The day was a strange one with periods of high activity followed by sporadic interest by a number of species. Mathew was first in with a starry smoothhound followed by numerous tope pups which fought hard and gave him excellent sport.

Allan missed a take early on with Dave, Carl and Stephen also loosing fish. He upped his hook size to a 9/0 and presented the largest mackerel he had which induced a good take resulting in a nice tope gracing the deck. Didn’t look like it would go higher than 30lb so she was returned after some quick photos.

More tope followed with Dave landing a couple to 27lb and Carl landing a cheeky fish from the stern. In the midst of the action Allan received a slow plodding take which resulted in a nice thornback ray of 8½lb gracing the deck. All went quiet for a while but near high tide the action picked up with a number of small tope and bullhuss being landed with a nice 12lb Huss falling to Allan’s rod.

Overall a relaxing day with some nice specimens and good banter, thanks go again to Skipper Andy who worked hard to get us on the fish and Matty the Mackerel whisperer for securing fresh bait!