Rick Pennington reports that last Friday was a dab day afternoon. He was gutted at the lousy forecast when the plaice reports were coming in in good conditions. However, on having a quick look out in the morning the forecast strong ENE winds had failed to show and the sun was out bringing promise of a decent day out.

He armed himself with his Teklon and Regiment with light tips and made his way to Harrowside. His first choice spot was taken by old mates from South Pier Joe, Tim, Dave and a few others and they informed him that they had taken fish off the beach, so that was a good sign. One rod was up and cast out a good way with a loop rig, size 2 fine wire and old blackworm, targeting plaice. The second similar rig was cast closer in and he settled down to wait.

It wasn’t long before both tips were rattling with a single dab on the close rod and double dab farther out. Up to high water the fishing was great with 11 fish, mainly at distance, mostly dabs with one flounder on the close in set up. Things went dead around high water for an hour and then picked up for another hour of good fishing, finishing up with 14 dabs, one flounder and a weaver. The score was 11 fish at distance and five closer in. He went through three wraps of black lug, old black lug and old, old, frozen black lug. No plaice but all in all a cracking afternoon.

Last Saturday Richard Gross fished with Rick at Harrowside after hearing of the above session and caught a first cast dab with four more to follow and a whiting all in an hour.

Chris Shaw fished last Saturday on the Gyn Wall and reports this time he didn’t blank finding six dogfish and three whiting and a dab to add to his species hunt list. He had a ray bait out all night but the doggies kept finding it. 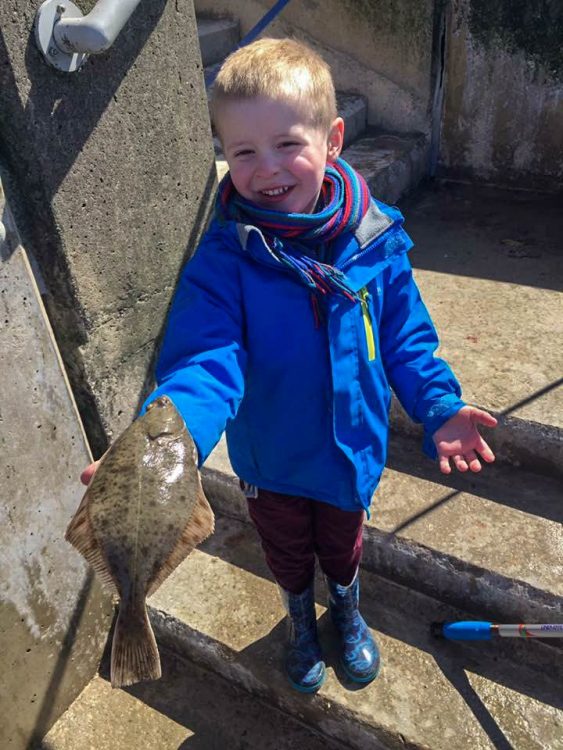 Christopher Russon fished last week with his young lad, William, and he reports that he visited Bispham Angling for some worm and also decided to get his son a new rod. With an excited four-year-old in tow he headed off to Harrowside. They fished two hours up and two down and an hour in Christopher landed a dab for the species hunt. Having hooked a fish his son was delighted, but in tears that he hasn’t had anything on his new rod. Then came a second dab for dab and at this point he was very disappointed. After high water though that disappointment turned to joy as he managed to catch two dabs and a cracking flounder on the ebb. One chuffed dad despite the fact that young William out fished him.

Joe Farmer headed out on Sunday for an enjoyable night on the Gynn where he had six codling, two doggies and a couple of whiting. His biggest fish was a codling of 35 cm. All caught on fresh black worm on a one up one down rig.

Kristian Leslie reports last weekend was an interesting day as he took the kids for their first session in Fleetwood channel. The weather was a bit mixed but didn’t dull their spirits as they fished two hours up and one down. His eldest out fished them all with a plaice and two flounder. The youngest sibling had the one flounder saving the blank. Kristian had a small plaice and Colin Blackburn landed a codling. All the fish fell to worm and mackerel. 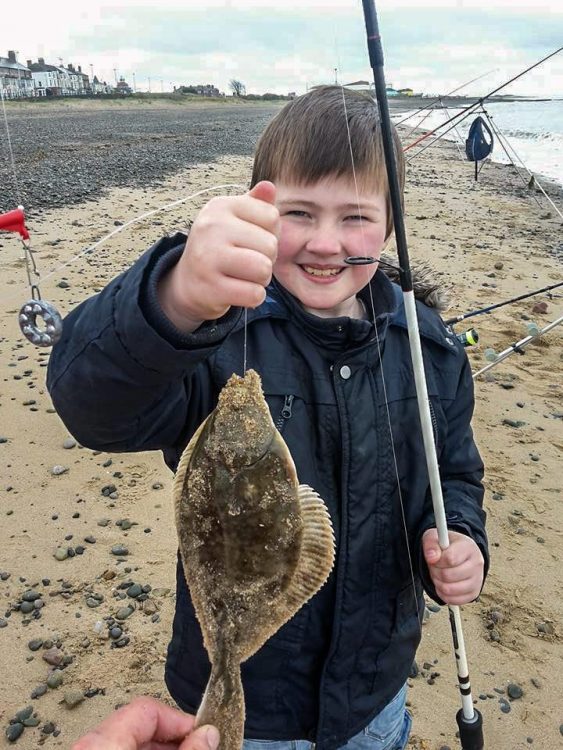 On Sunday Reece Medcalf had a fantastic day at Morecambe Jetty where he caught his first in size bass this year at 42cm followed by a 37cm Plaice.

Andy Whiteside member of Wyre Boat Angling Club landed his first smoothhound of the year just off Clevelys last week. Fylde Boat Club member, Dave Stainton reports that he launched Sea Spray around 08:15 today for a six-hour trip. He tells a similar tale to last week, with a lot of small codling and whiting about although the dogfish weren’t quite as prolific as on the previous outing.

Blackpool Boat Angling Club member, Alan Taylor fished last week with Pete Holland back aboard. They managed just two hours of the flood and things were no better than yesterday, although a decent, targeted plaice showed up. With the start of the ebb they moved off into deeper water and as the flow picked up dogs, whiting, codling and dabs kept them busy. Only one decent fish at 4½lbs and a suntan to show for it but hey, it beats a Thursday at work.