Nicholas Mclintic caught his first ever codling last Sunday from Rossall point along with five others on a two hook flapper with black lug as bait. 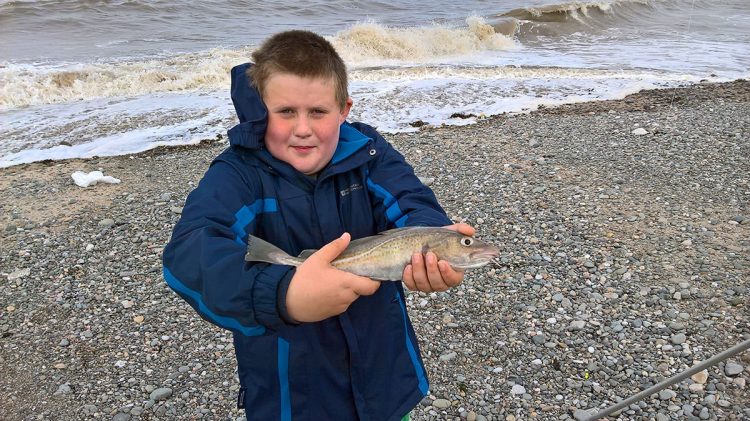 Fleetwood and District Angling Club’s match at Rossall point followed the trend of the recent club matches, and looked like being a total blank for all the anglers. However, the last twenty minutes saved the day with a dogfish, some tope pups and a whiting throwing themselves on to the hooks.

The members will be glad when September is here and catches hopefully improve. First place went to Hughie Porter with a tope for 50 points. In joint second were Simon Dawber and Ken Forrest both with 44-point tope while Bob Marsh’s dogfish was good enough for third spot. Dave Norton finished fourth with 8 points and Ray Rodger fifth with 6 points.

Lancashire Sea Fishing members Terence Gargan and Ruth Parkes headed out with Ruth’s mum Sue to further her fishing passion. They used Terence’s dory to ferry them out to the Red Herring. The sun was rising, with calm seas and a light wind and off they went at a stunning ten miles an hour.

Their destination was Heysham Chanel at no 5 buoy as this mark can produce multiple species, and it always surprises what may be caught. They anchored on an ebbing tide and Sue was first in with a doggie followed by even more dogs and Ruth pulled in a whiting with a large dogfish attached to it, having grabbed the whiting on the way up. A few small dabs and plaice followed with more dogs. Three hours into the ebb Terrence decided on a move. With electric gadgets on the Herring it was purely guess work from previous outings but they we found the mark or very close to it.

First cast Ruth had a massive pull down on her light spinning rod and she was on it like a flash. A 7¼lb bass came to the surface, where it was struggle getting it into the net prompting thoughts of a bigger net. 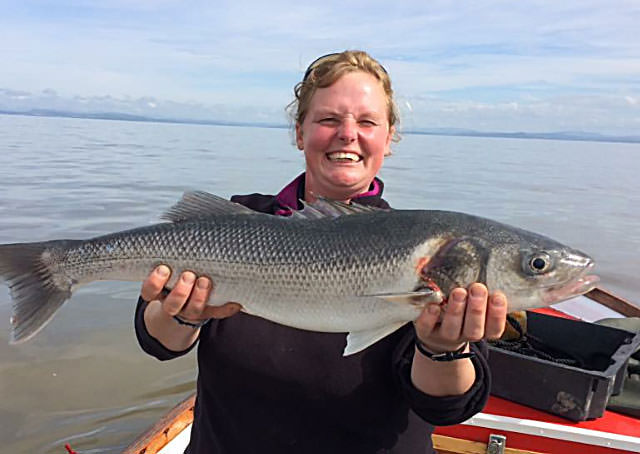 Ruth was shaking like a leaf with the adrenaline coursing through her veins, a personal best for her. Shortly afterwards Sue landed a small thornback ray which was returned, as were most of the fish that day. Her patience was rewarded with a bigger personal best ray for Sue. As she manoeuvred it to the side of the boat Terence advised Sue not to lift it aboard. So Sue stuck her finger in the ray’s mouth where it gladly latched on and she landed it safely, saying this one’s not getting away. But the fish would not let go and it left a nasty bruise on her pinkie. This one went home for tea.

All Terence was a steady stream of dabs that were tiny, where have all the big ones gone to? Plenty of plaice later on though.

Later in the afternoon the wind picked up so they headed closer inshore for more plaice. It was a little rough on the way back so the ladies produced their umbrellas. We had a few good plaice near the Stone Jetty before returning to the mooring and home. A great day with good mates they were hoping for a bass each but it is not that easy to achieve. Terence’s spinning rod is still a virgin after trying very hard, a million casts, maybe next time.

Ray Rodger reported that last Tuesday he fished the Gynn Wall and christened his new hoodie and Shakespeare Agility from Bispham Angling. He hooked into three smoothhounds but lost one half way in, lost another lifting it up the wall, the hook broke, but landed the third which weighed 9lbs 2ozs. All the hounds took peeler crab and worm cocktail.