Unlike the past couple of years, good fortune has finally fallen upon us with June far more settled than the previous couple of years. Light winds and plenty of sunshine have seen us set sail on many occasions, searching for a variety of species whether it be on the drift or hard at anchor.

Smoothhounds continued into June but became harder as the weather improved. With the catches dwindling we resigned ourselves to wait for the 2nd run later on this year.

Drifting the many rocky outcrops that surround the north western edge of Anglesey can be a fantastic experience not only from the fishing but the scenery as well. South Stack and its array of birdlife including the likes of cormorants and puffins is always a favourite with the camera buffs. Close in under these cliffs anglers have been having a field day with catches of pollack, coalie, mackerel and wrasse – ballans, cuckoos and corkwings. Using light sensor tips and an average size of 2.5lb the ballan wrasse fights extremely well with tackle being test to the full when the anglers has a brace fighting in all directions. 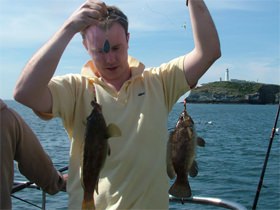 A recent surprise whilst drifting this mark came in the form of a topknot. Weighing no more than 4 or 5 oz this is certainly this fish of the year so far. A first for its captor Monty Burns (no not that one!) but also a first ever aboard My Way and a welcome addition to our species tally for the 2009.

Fishing at anchor has improved with each passing day and inshore marks have seen a variety of species coming to the boat including gurnards, red, grey and tub, huss, several mini-species, thornback and blonde rays, smoothies and congers. Offshore marks are also starting to produce a few nice fish.

From mid June we turn our attentions to chasing after the tope. With settled weather on Thursday of last week Paul Whittle took the helm of My Way for me in search of some double figure shark action at the bottom of Holyhead Deep. With only a three hour window to fish the crew from Merseyside were rewarded with 20 tope to 25lb, over 20 huss averaging 16lb and a couple spurdogs, along with whiting and dogfish. The best of the spurdog last month went to Sam Smith with a cracking 17lb 13oz specimen. Not bad for our first foray after Holyhead’s tope. As time progresses the numbers should increase along with the size of tope.

Chicken cam is proving a bit of a hit and adding a little fun to our days fishing The unfortunate soul who is first to leave a rod un attended whilst venturing to the toilet is rewarded on return to his or her rod with the fight of a lifetime. Chicken cam is certainly raising a giggle amongst the crews, no one knowing when the chicken will be despatched!