For the past couple of years June has been a wet and windy period but this year warm, settled seas during the whole of the saw My Way and its crew sail regularly raising hopes for the rest of the summer.

In typical fashion, good old British Summertime kicked in during July, just as the kids break from school and many anglers look forward to the summer days afloat. Wet, windy and to quote from a radio station I was listening to recently – “typical April weather”.

Undeterred the boat has set sail on many occasions in search of the numerous Anglesey species, including the elusive tope.  Tope fishing was intermittent in 2007 and 2008 with the weather putting paid to many a planned outing. Those who sail with Gethyn on a regular basis know only too well that small tides and calm seas are required for Holyhead Deep adventures. 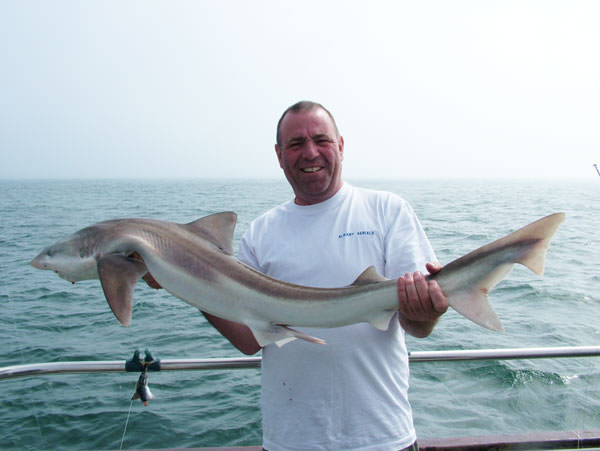 So far in 2009 the boat has managed to fish in the deeps on a number of occasions with good results.   Although this seasons tope have not been massive by the usual Holyhead standards the quantity of pack tope averaging 20 – 25lb more than make up for this. Fish this size offer some excellent sport on light gear. During the next few weeks numbers should increase as will the sizes with a 60lb specimen a reasonable target.

The main species at the moment is the ballan wrasse which can offer the angler adrenalin pumping action. The most popular and productive form of fishing for wrasse is on the drift. More often than not the grounds you will be fishing will be relatively close to shore, in waters less than 60 feet deep. Given the nature of the wrasse’s preferred habitat, these marks are weed covered, rocky areas. Tackle losses will be inevitable during your quest for these hard fighting species, but pound for pound they are offer some of the best sport in UK waters.

With plenty of huss, rays, gurnards, dogfish, whiting, codling and many other species available onboard My Way the weather will hopefully down for the coming month and allow us to enjoy our fishing once again.

Mackerel and other fish baits