28 anglers fished the Bispham Angling and Lancashire Sea Fishing night match last Thursday night at Gynn Wall. The fishing proved difficult for some and not so much for others with plenty of small whiting, there were also a few doggies, codling, dabs and flounder. All the fish were caught using frozen black and squid. Top spot went to Stuart Dewhurst with a total length of 273cm, winning £70. Runner-up and lifting £49 was David Hoyle with 232cm and third placed David G Hutchinson won £21 with his 220cm total.

The longest fish £10 voucher went to Darren Evans for his whopping 63cm dogfish. The next match is a night match on Friday 24th March, details will be up this week.

Fleetwood and District Angling had 23 anglers turn out for their recent match at St. Stephens. It was definitely a case of Grimm Wall rather than Gynn Wall today as only seven anglers caught fish. It was mostly flounders and a few plaice. With so few fish it was hard to say what the top bait was but fresh blackworm probably caught the most. The poor fishing can probably be blamed on the clear water. Let’s hope it is much better next week at Lytham.

First place went to Ken Forrest with 21 points, in second was Roy Slinger on 18 points and third placed Trevor Barnett had 13 points. 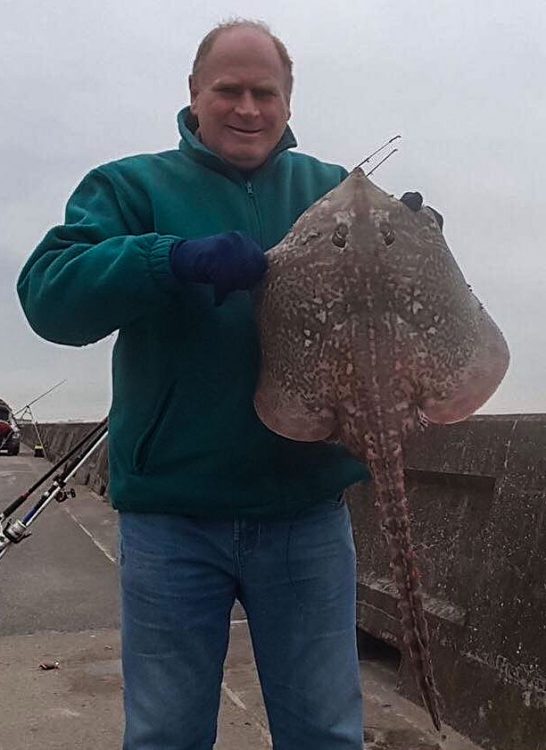 Dave Carr with his thornback ray

Last week Dave Carr fished the Gynn Wall and was rewarded with this cracking shore caught thornback ray. The fish fell to a piece of frozen mackerel. 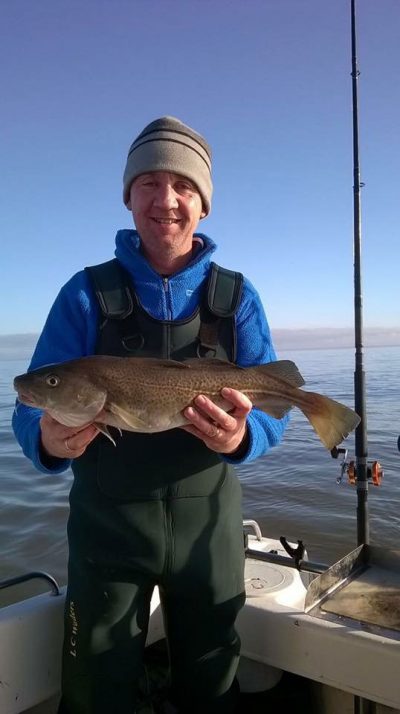 Jonathon Halls with a codling

Jonathon Hall, a member of Blackpool Boat Angling reports that he had a fantastic day out with Neil Whittle on Sundaze. It was an early start launching at 6.30am in to a flat calm glass like sea. They decided at have a couple of hours fishing a shallow bank in the Ribble. They used size 1 hooks and running ledger fished with fresh black and rag from Bispham Angling. In the hope for a few plaice and flounder they did catch a few of these and surprise 5lb cod turned up. They then had a move towards Cleveleys and Rossall where they found lots of whiting about, a dozen small cod and one keeper as well as a few doggies and a dab. A fantastic day and having used all the bait they headed home. Thanks to Owen for bringing the trailer down the beach.

Last Wednesday Mark Yule, a member of Wyre Boat Angling Club tried the shore for a change. He fished 2 hours over low water as it looked great out there in the sun. In quick succession, he had three cod on the ebb on fresh blacks. Great to see that the cod are still there.

David Turnbull fished low tide on Wednesday at Cleveleys, from 12 till 4pm. He had two codling, one a keeper, and two whiting, all released.

Martin Foxcroft had a change from the Mersey and travelled north to Morecambe, to fish low water. The weather was good, a bit of a breeze and sun shine all day. He fished two and a half hours down and two up, nothing on the ebb but as the tide turned the first bite produced a nice 42cm plaice followed by another three of similar size. Last cast resulted in a flounder, for a good day out.

Last Saturday Ray Rodger had a short evening session on the Gynn Wall. Ray dogfish, whiting and his targeted fish turned up in the form of a nice codling one hour before high, as did the rain.

Last Thursday Terrence Gargan had a session on the Stone Jetty with Bert and Simon. They arrived as the tide flooded, only an 8-metre tide but it ripped in. Bert was first in just as the light faded with a small whiting. Then Terrence with a good cod and a whiting, the first double header of the night. Simon started catching with a small plaice then had several whiting and a small cod. Terrance had another double, dogfish and whiting before the weed appeared on the ebb and it died a death. The wind picked up so they packed up at around 10:45. Bait was frozen black, bluey and squid.