There was a poor turnout for the annual Skegness Pier Angling Club (SPAC) Lincolnshire Pairs match, held in perfect conditions on the secluded beach at Drake Road. But those who did turn up enjoyed some good smoothound catches, as the hard fighting small sharks appeared in quantity on local beaches for the first time this summer. Paul Marshall won Zone B with six smoothounds measuring 523cm in total, pairing up with Dave Burr who took second place in Zone A, with a seven smoothound catch measuring 600cm. This gave them first place in the Pairs, with a combined 3 points. There were no flatfish caught and Paul also won the longest flatfish prize by default, with a 100cm smoothound. Just one point behind the winning pair came Grimsby aces Adie Cooper and Dan Jackson, who took first place in Zone A and third place in Zone B respectively. 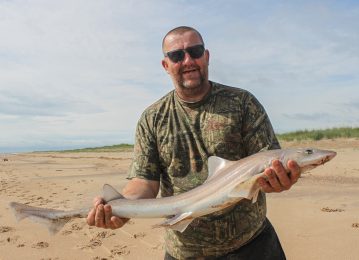 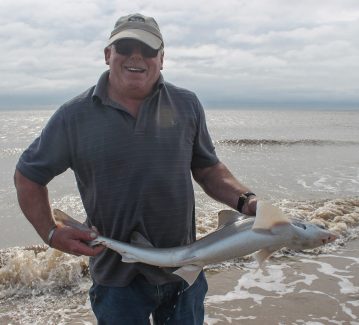 Adie took individual honours on the day, catching eleven smoothounds measuring 925cm and also won the longest round fish prize with a 101cm smoothound. Wrangle’s Darren Blythe and Alan Steadman came in third pair with 7 points and a combined fish length of 152cm.
The next SPAC match will be held on Sunday 17th Jul from 1:30 till 5:30pm at Chapel Point, with Club members fishing for the Roy Parker memorial cup, in memory of our sadly departed friend. There is also an open section, which non-members are welcome to participate in. For further information, please contact SPAC Secretary Chas Tibble on 07984 967988 or chastibble@hotmail.com