The SPAC AGM took place in the New Park Club Skegness on the evening of Saturday 18th Feb, followed by the annual Trophy Presentation, grand raffle and buffet. Winners are as listed below and a photo of the winners is provided in the gallery, along with one of Skegness lifeboat coxwain John Irving receiving a cheque for £50 from Alan Steadman. 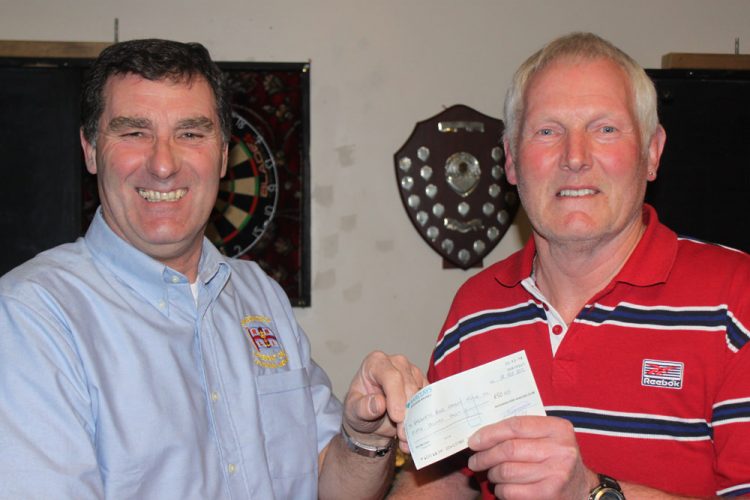 After all the formal and other bits were completed, the most important event of the evening took place, which was the annual Skegness v Kettering darts doubles challenge. The format was best of 3 games of 501, double in, double out, with the losers buying the beer.

Representing Skegness were Chas Tibble & Dave Bradley, against the four years unbeaten Kettering partnership of deadeye Dave Shorthouse & bullseye Bob Foster. The first game was close, with Chas upsetting the form book by holing out on double 8. The second game was again close, with bullseye Bob finishing on double top. So it was all on the last game, with deadeye Dave in unstoppable form from the off, peppering the treble 20 with unerring accuracy. The Kettering duo were soon on a double, with the Skegness boys still in the upper 200’s. It was then that the Kettering wheels came off, as successive doubles were missed and Bob made a mess of things to end up on double one. The excitement mounted as Chas stepped up to the oche with 73 left. First dart treble 11, next dart clipped the lower wire on double top, then the last dart did the same on the inner wire of double 10. The pressure was now telling, as Bob and the two Daves all missed and Chas came to the oche again. This time there was no mistake, with Chas’s first dart landing plumb in the centre of double 5 and the darts bragging rights came to Skegness at last!