After the storms Dudley, Eunice, Franklin it was great to be back to fishing Monday night. Feeling was replicated as all arrived well before time ensuring a 6:30pm start.

15 booked into fish, and it was great to see Andy Turk and Leon Smith back on a Monday night after their winter sabbaticals. Thanks to AJ for providing fresh doughnuts, always a winner. Pre-cast off the discussion as usual was the inevitable question of whether to fish to size/converted, length or 18cm+ converted. After listening/reading the fortunes of John Spalton/Jamie Childerhouse/Richard Hipperson who fished the weekend we decided to fish 18cm+ as it was expected that we would be facing weed/no fish. So, with a planned 6:30pm start it was match on. Big thanks to John S for pegging the venue.

High tide was 16:55, so with the water ebbing we cast off. Great to see early on that a few fish being caught, not sizable but over the 18cm target. As the match progressed each peg delivered fish, no blanks. The weather meant the last few hours were decidedly wet, not really a problem so long as you are catching. So, with fish over 18cm and no weed, and just enough water to fish in a good night was had by all. In total 97 fish caught of which 92 were whiting.

Leon (peg 13) signalled his “summer” return with a magnificent 38cm whiting specimen, winning biggest round fish. Confirming that a winter sabbatical is beneficial to your fishing mojo Andy Turk (peg 3) landed a 28cm Dab picking up the biggest flatfish. 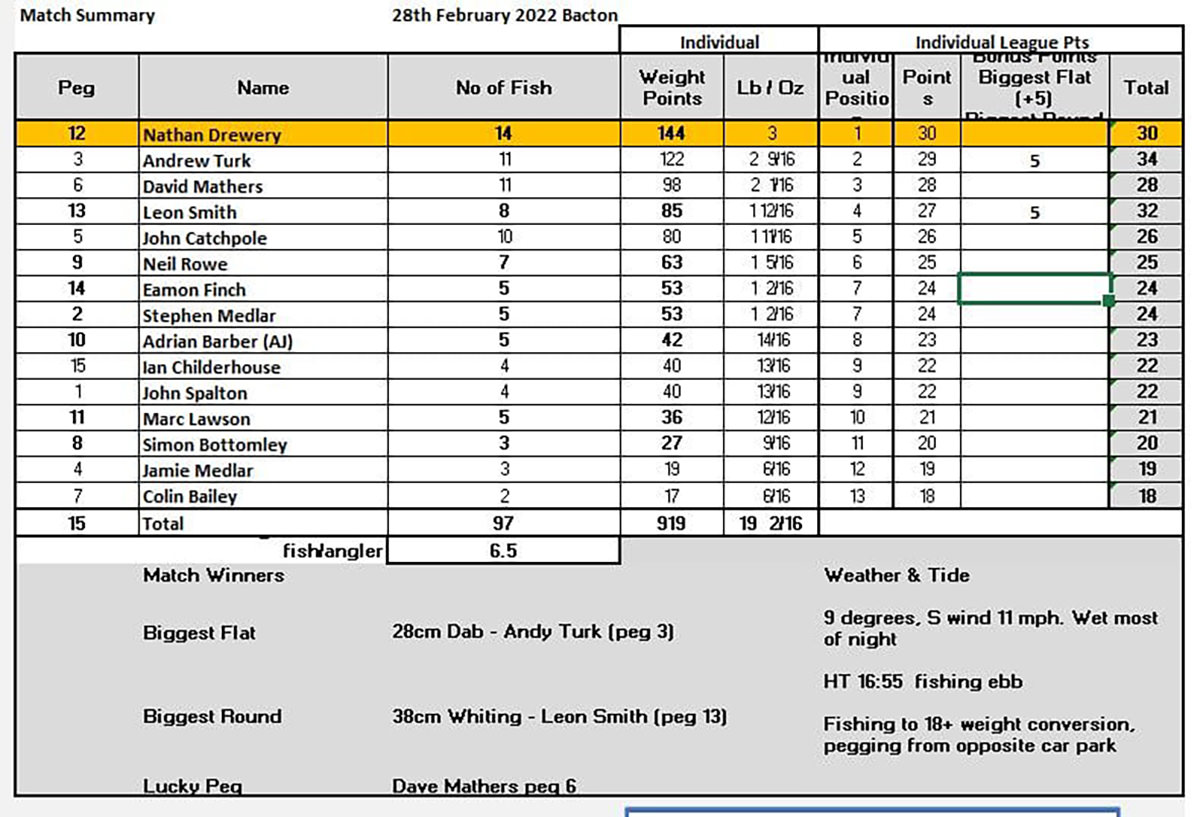 Biggest bagger on the night was man in form Nathan Drewery (peg 12) catching a splendid 14 fish, weighing in at 144 points (3lb). He was joined on the podium by Andy Turk catching 11 fish, weighing in at 122 points 2lb 9ozs. Third place went to David Mathers (peg 6) with 11 fish also but weighing in 98 points (2lbs 1ozs). All caught cardable fish, so the early pessimism was not realised. Just goes to show that a beach changes every tide and day, the magic that is fishing.

Next match 7 March – Weybourne HT 21:24 keep an eye on Facebook/WhatsApp for details or late changes.