Humber SAC ran the Smoothhound Open last Saturday in perfect westerly conditions. As ever, anglers travelled from far afield to take part, but one unlucky bunch from Wales ended up at Filey Brigg thanks to a dicky sat nav – or at least that was their excuse! 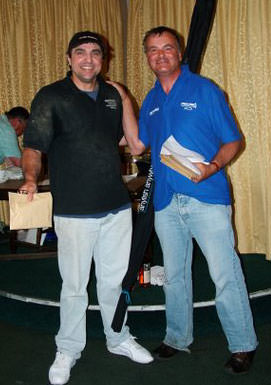 Hounds were taken almost from the starting hooter all along the match stretch. Jez Waters got off to a flyer with a couple of good hounds, but as the match progressed it was George Smith found a steady rhythm and regular fish. Dave Reid was also fishing flat out and was trying to make it two titles on the trot, but George Smith’s s Anyfish Anywhere was the busiest on the beach.

Back at the Vine Hotel anglers were all smiles after a fantastic day that produced loads of fish. George Smith took top honours with an excellent catch of six smoothies for 534cm, earning him a healthy wedge and another Anyfish Anywhere rod donated by Julian Shambrook.

Runner-up was last year’s winner Dave Reid with a 498cm total length. Jez Waters claimed third place with five hounds and a flounder for 487cm. Fourth went to Mark Pinder, with Adie Cooper fifth. The biggest round fish was a smoothhound of 103cm for Jerry Bell, while the biggest flounder a monster of 40cm caught by Paul Marshall.

Thanks to Julian Shambrook and Sea Angler magazine for the prizes; the Vine Hotel for hosting the weigh in and all the anglers for making it such a success. Final thanks go to the Humber SAC for organising the match so professionally. Plans are in motion for next year’s event which we hope will be even bigger and better.