Another great turnout with 17 anglers gracing the shores of Cley. Sadly the weather hadn’t been informed that it was supposed to be summer, with north westerly winds and persistent drizzle it made for an uncomfortable evening. Hopefully the fish had been advised that we were fishing tonight.

30 minutes into the match it became apparent that the fish had all left for a summer vacation and only the odd one had remained.

With catches being very slow the highlight of the evening was Kevin Wyatt who had to be assisted off the beach after putting his back out during a potential world record breaking cast. Luckily some of the lads rallied round to get him and his gear off the beach. Sadly we didn’t take a picture but it was remarked that Gandalf was leaving the beach clutching his tripod as a walking aid, he gave a new meaning to the words put your back into it, get well soon mate.

Anyway onto the amazing fishing results out of the 17 only eight managed to find sizable fish. Top rod honors went to Barry Iseton with three fish , a bass of 39cm , a flounder at 29cm and a dab of 23cm, giving him the grand total of 2lb 1oz. Second place podium spot went to Ian Childerhouse with a dab and a bass for 1lb 61/3oz. Third place went to Leon Smith with a flounder of 8oz. Dene Conway finished fourth with a solitary 24cm dab and fifth place was shared between the only other anglers to catch a single 23cm dab each. 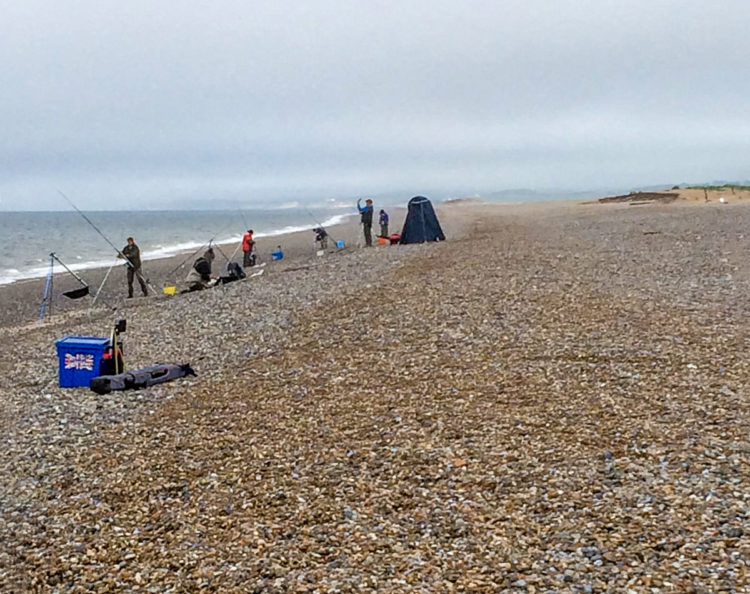 Heaviest flat went to Barry for his 29cm flounder and he also won heaviest round with his bass of 39cm well done mate.

Several undersized fish were also caught but the evenings fishing was pretty dire and matched the weather conditions perfectly. Well done to all, next weeks match is back on the sand, down at Bacton where we are not expecting to catch anything so hopefully we will be surprised.

This Sunday is the NAC’s first coarse match of the year, if anyone would like to fish / learn please let me know in the shop, equipment and help supplied throughout the day.