Another mediocre week, without any signs of codling feeding although there is some good news for beach and pier anglers, there are lots of small fish, mostly whiting and dabs with a few dogfish feeding for good measure.

The boats found a one-day break in the prevailing winds this week, when the wind dropped to nothing and the sea was flat. Some of the Clacton Boat Club members took advantage of this break in the weather and headed out to the Gunfleet sands. Unfortunately, they reported that there didn’t seem to be much to be caught, apart from the odd small ray. Dave Hollands told me that shoals of sprats and herrings were still there in force and until they move out of the Thames Estuary we will struggle to find any cod feeding.

The Brightlingsea based charter boat Seawatch also headed for some local venues. Once again, no sign of cod, but thank goodness we are still seeing a few thornback rays. Craig Inwood landed a cracking ray weighing in at 11lbs. 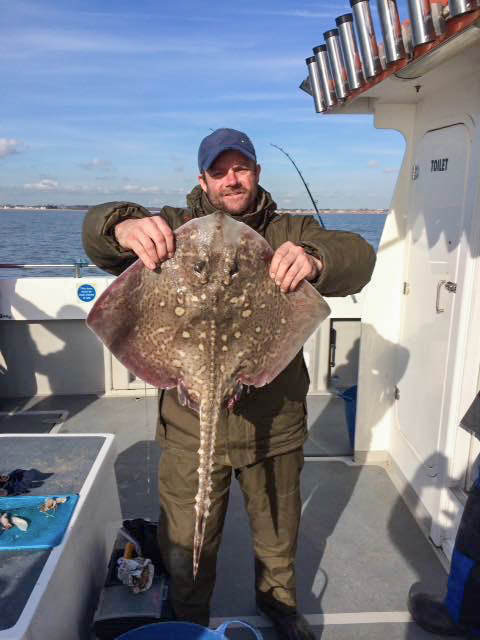 The Walton Pier Club’s latest match was on the golf course beaches at Frinton. Unfortunately, the weather was so bad with high winds and very rough seas that they had to abandon the venue and finish the match on the local pier. 15 anglers fished their pairs match and managed to catch 52 sizeable fish between them, mainly small whiting and dabs with the odd small codling.

The winners were Joe Marvel and Andy Westrope, second place went to lone angler Kevin Blackwell as he was the last angler left in an odd number of competitors, so well done Kevin. Three teams shared third place.

Walton Pier has had a better week, with most anglers catching fish although they are on the small side, but at least fish are being caught. Walton Sea Angling Club also fished the local pier for their evening match. They fished an incoming tide on the top of the pier in surprisingly calm conditions. A steady stream of fish was landed, which included whiting, dabs and dogfish. Top spot went to Rob Tuck with 6lb 4oz, second position went to Vic Pearce with 4½lb and Craig Buy finished third with 4lb 3oz. Heaviest fish prize went to Rob Tuck for his 1lb 10oz dogfish.

The Holland and Clacton beaches have fished very poorly this week, with just a few small whiting reported. Clacton Pier has also had a poor week, small dabs and whiting is all that has been caught.

For a chance of catching a ray this week, St Osyth beach will be the place to head; there are still a few showing up around this area.