Renowned Weymouth charter boat skipper Paul Whittall has issued a clarion call on social media in the light of the recent restrictions affecting sea angling that are having a dire effect on the charter fleet and related businesses such as tackle shops and accommodation providers.

“I have been asking around what we can do regarding the bass restrictions. Most responses have been pretty negative and indicate a general feeling of despair and despondency.

I believe we thought that the ‘Recreational Angling Sector’ had made inroads into the ‘Establishment’. Facts and Figures, gathered over some years now, appear to have been accepted and the value of the RSA recognised. We thought we were ‘Stakeholders’ and that we were being listened to. This of course is not the case.

The Recreational Sea Angler and The Charter Fleet operators have been insulted in the latest developments on the bass restrictions and livelihoods are now seriously threatened with alarming messages of cancelled bookings coming through. Clearly these restrictions (a no bass retention for six months and then one fish per angler for the next six months) has not been popular as shown by these trip cancellations!!

The RSA naively believed, because we were told so, that this was all under the umbrella of ‘Conservation’ and as such there was an acceptance that we must all play our part IF the figures being offered were correct. But this is not the case. It is nothing to do with Conservation. It is all to do with Politics. It is not easy to convince an angler that he is ‘doing his bit’ for Bass conservation when he sees what is happening alongside him.

Divide and Rule is a well-known Political tactic and it has been used here again to set the Commercial and Recreational Sector against each other over this issue. Here in Weymouth we Charter Skippers are proud of our good working relations with our Commercial Fishermen colleagues and we know that we MUST work together. Fighting each other is just what Governments play on.

The main problem now in the Recreational Sector is that no matter what any of us do there will be great opposition to it and we will continue to get no-where. So, what can be done?

This bit is now for the Charter Skippers because for those of us that offer bass fishing as part of our annual programme, we are in trouble. 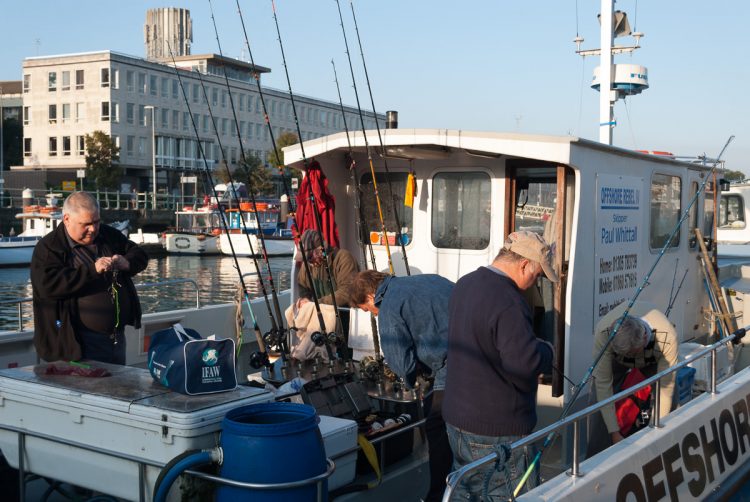 A plan, which we in Weymouth are doing right now:

1) Try to regroup in your port under a local Association heading. Try to get as many skippers to join, easier said than done!

2) Get someone kind enough to act as Secretary and let’s link up all those local Associations so we are in communication with each other. We can do it through the Weymouth Association if we like. (I am happy to offer myself as co-ordinator until a better man steps up to the mark. Just email me pwhittall@aol.com or Telephone me 07860 571615)

3) Join, as individuals, our only National Association. The PBA. The PBA is made up of ordinary skippers like any of us. They too were in deep despondency but over the last few days there is a change brewing. The PBA needs to bring the membership up to the levels when we were under threat from the Code of Practice.

4) Gather information about the loss of business, bookings etc from your local members. This can be either submitted Individually or via your local Association or via the PBA.

5) This information should be sent to the Fisheries Minister, Mr George Eustice. He signed the deal that we are now losing our bookings under. It is better to write a letter, emails have become a total turn-off for many and can easily be blocked.

Address is Mr George Eustice, 1 Trevenson Street, Camborne or to George Eustice, Westminster Office, House of Commons, London SW1A OAA. Send your letter recorded delivery…it is too easy for non-receivers to ‘blame the system’ and say they did not receive your letter.

You may recall the Channel Islands situation a few years ago with the threat of two fish per species per trip. The letter campaign raised over 2000 submissions which we were able to use to support our point of view and overturn the damaging proposals back then.

We can curl up in a ball and grizzle OR we can make our voices heard. Even when we think we have got somewhere, we must realise we cannot rest and we must keep on until we really do have the recognition as an Industry that we thought we had!

Land of HOPE and Glory! Let’s unite and fight this unfair and ruinous situation together under this framework. Don’t bother me with negative comments, we cannot afford to criticise and run each other down. It is destructive and self-defeating.”

As well as contacting the Minister further pressure can be brought to bear by writing to your local MP, details of which can be found on the They Work For You website.

It is imperative that all parties involved in sea angling unite and pressure those with the power to rectify the current, dire situation before more businesses suffer.

How to Tie a Donkey Rig or Double Fluke Rig