I am so glad to report has been a hectic month aboard My Way with the weather being kind for a change. For the first few days of June, I was joined aboard My Way by a great group of friends from disparate parts of the UK. This group have become Anglesey regulars over the years with their main targets Holyhead’s smoothhounds. Unlike previous years 2013’s three day booking promised trips uninterrupted by weather.

We caught plenty and everyone had some great fun with hounds the mid-teen to twenties weight class. Skatemeister, Davy Holt tamed most of his hounds on the light £20 Yuki Rubymar rod that proved to be more than up to the task despite initial doubts and will be a regular feature on board My Way. Top honours though went to Peter Hutchinson, who ignored the comments of being the ‘tangler’ and caught a pack of massive hounds including one at 19lb and another magical smoothie of 22lb. I also managed to fit in a “skippers drop” which resulted in a personal best smoothhound on the final day of the booking, weighing in at 24lb 10oz. 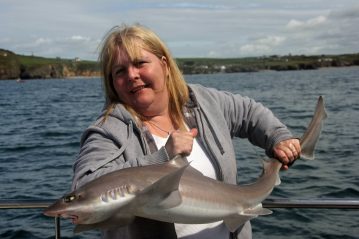 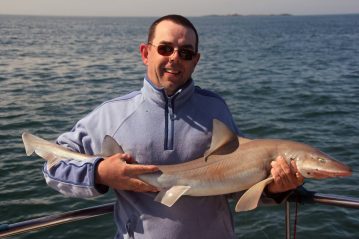 Another annual pilgrimage followed on later that same week when Harry and I were joined aboard My Way by the Boat Fishing Monthly Team, this time Dave and Jim bringing ad man Daz up to sample some hot fishing and hot nightlife around Holyhead. As with last year’s couple days, we were joined by Mike Thrussell jnr from World Sea Fishing and a competition winner whose prize was to fish aboard My Way with the great possibility of joining that VIP club for 20lb hound captors. I was confident of good sport as the fishing had finally kicked up a gear after a couple of months in the doldrums. The sun was out, the crabs were peeling and the fish obliged when Tom landed a 24lb 5oz beauty. You can read the full story in an upcoming issue of BFM, but yes, Tom made it with a 24lb 5oz beauty. 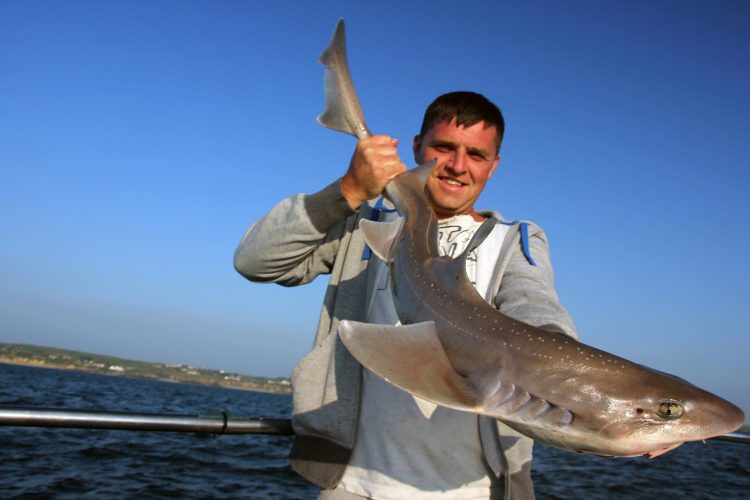 We remained smoothhound hunting for the next couple of weeks with general fishing for dogs, dabs, huss, gurnards and the other smaller species when the tides did not suit an all out assault on the hounds. Some days fished far better for hounds than others, despite similar conditions, just a simple case of the hounds not being there on every tide. The smoothhounds off the Holyhead coast tend to be mainly double figure sharks, and they do seem to be more solitary feeders and do not shoal up in bulk like the smaller hounds. Sometimes three of four fish will move through the zone before it goes quite for an hour or more, then the next batch swim through. Challenging fishing indeed that really does try the angler’s patience and keeps the skipper busy in the galley between netting.

Entering the third week in June and with light variable winds coinciding with neap tides it was decided to shoot offshore to the edges of Holyhead Deeps were we would be able to try out a few wrecks in 180 feet of water for pollack and codling. Over slack water, we would drop anchor and hope to connect with more of the shark family in the form of tope, spurdog and huss. 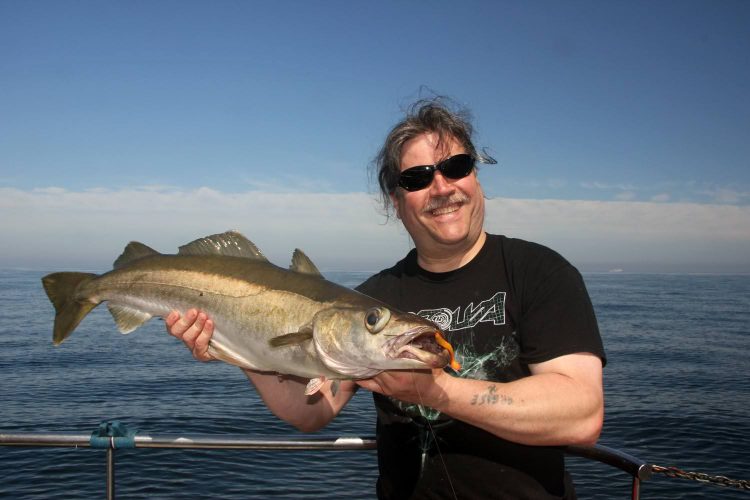 Fortunately, the gamble paid off and during the few hours on the drift over the ebbing tide, we pulled out plenty of pollack averaging 6lb in weight. We also managed to boat a dozen fish into double figures, the best weighing 11lb 8oz. With all of the days consisting of individuals, there was a great mixed bag of abilities as well as fish, with everyone reeling in something of note.

The following week started with a group of regulars from Burnley in Lancashire and the good weather allowed another Deeps trip. The foray offshore for bigger stuff and a few table fish was fruitful with pollack on the drift, and then huss, spurdogs and tope at anchor, the best going 22lb for Pepe. It was a great day, topped off with some great biscuits and scones from Mrs Eve. 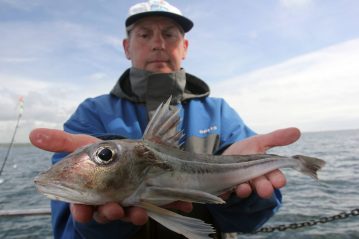 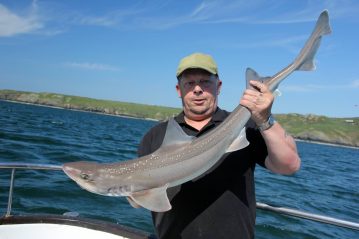 The following couple of days saw a similar pattern for us, starting on the wrecks for the last few hours of the ebb tide. This had most of the crew catching decent sized pollack for our small part of the Irish Sea. Sidewinders, shads and jelly worms were all used to great effect by our varied crews. Certain colours out fished others noticeably at certain stages of the tide, one of the benefits of the skipper’s job is that you can observe all that is happening around the boat. At anchor numerous spurdog, huss, small tope and the ever-obliging dogfish kept us busy whilst drinking tea and coffee and enjoying our sausage & black pudding sarnies.

With tides increasing and an unsettled weather forecast, we ended the month inshore for a spot of general fishing, followed by another bash at the smoothhounds. Thankfully, this plan worked and after a few hours on the dogs, dabs and a few other species, the lads were rewarded with some great double figure smoothies. The best fell to Neil Harrison’s ledgered peeler crab, at an astounding 23lb this made it four twenty plus fish so far in 2013.

Now looking forward to the great sport continuing through into July, details of available dates are available on the GO Angling website.