This week is really about our lack of cod on the East coast where, for the last 8 years, our cod stocks have reduced, and although we should now be in full swing with reports of cod from boats, piers and beaches, unfortunately I cannot report on any at all this week!

Yes, other parts of the British Isles are seeing a run of our winter cod stocks, but even they are seeing their catches at an all-time low. Two reasons: one being over fishing for many years and two has to be global warming. At the moment the sea temperature is around 15 degrees centigrade and those winter cod will not come into our waters in any numbers with temperatures above our seasonal norm.

The boats this week have once again seen plenty of thornback rays being caught plus whiting and dogfish, and with calm weather at the weekend most charter and private boats took to the water.

Terry Woodrow’s Walton charter boat Misty Lady reported plenty of rays, in fact his party caught 20. But sadly, no cod. Local angler Martin Smyth launched his boat from the Clacton beaches, and caught thornback rays to 7lbs, plus plenty of dogfish and whiting. 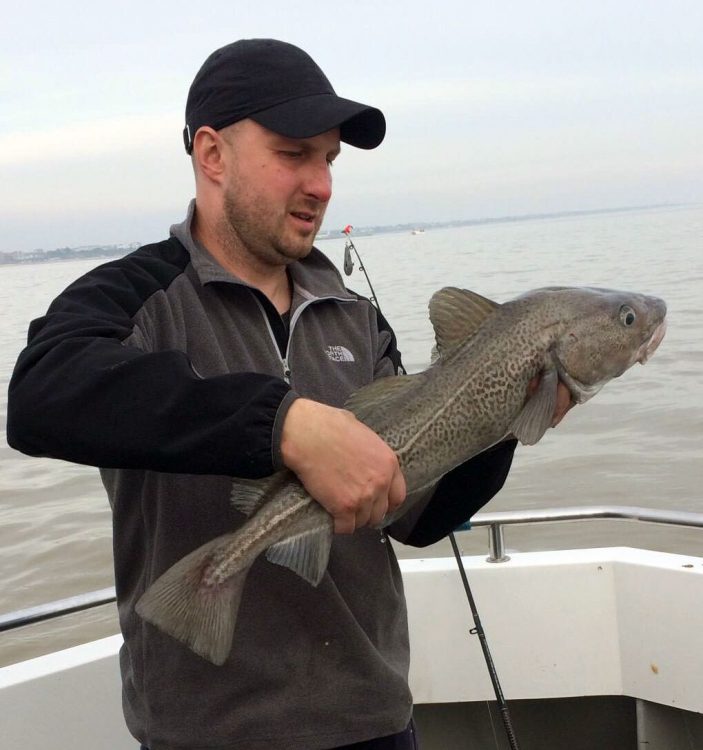 The Brightlingsea-based Seawatch charter boat skippered by Lester Baker reported plenty of rays to be caught and in the last few days some cod to 7lbs.

All our beaches have fared better this week, with the Holland shoreline coming out on top with plenty of rays being caught, mostly on the night tides. But on overcast days thornbacks have been caught.

The Frinton beaches are fishing reasonably well, although weed has been a problem, but only when the tide is running at its hardest. Garry Graham and Ronnie Adamson fished here during the week, and Gary told me that those ferocious feeding whiting were not a problem and they managed to find a few of those late season bass feeding. They had a great evening with bass to around the 1lb 5oz mark.

Walton Pier has seen plenty of whiting this week and rays from the top of the pier, but sadly none of those winter codling.

Colchester Sea Angling Club fished the 4th Round of their Colchester Bait & Tackle series of matches on the coast guard beaches at Walton and whiting were the main catch, in fact the shoals were there in force! 12 anglers fished a flood tide on a calm and misty evening, and whiting were caught from the start, with fish coming out in two’s and three’s for most competitors on most casts.

The final results were 1st Martin Close with a very credible 10lb 6oz, 2nd place went to Dave Clark 9lb 2oz and 3rd Steve Yallop 7lb 15oz. Most anglers had bags of over 6lbs, but only one small codling was caught.

Their next match is an Inter Club competition against Maldon Sea Anglers on Walton Pier – November 16th – All members are welcome.

The high tides for the weekend are Saturday 14.39pm and Sunday 15.20pm