Temperatures have soared this week and not all anglers have benefited from the rising sea temperatures. For the beach angler the daytime tides have made the fishing difficult with the bright sunlight pushing the fish out into deeper waters. However evenings and overcast days produced fish, and the night time angler has seen the best returns.

Pleasure anglers on Walton pier have had an up and down week, with smoothhounds and rays still to be caught but they have been a bit patchy. Bass are now being caught on lures from under the pier. The darker coloured lures will always catch more fish.

School bass and soles are now showing well from most of the Walton beaches, and top venues will be Hipkins, the coast guard beaches and Burnthouse. 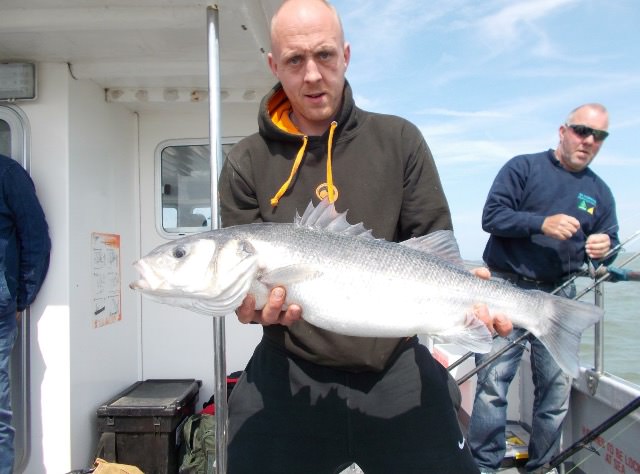 The Frinton beaches have been quiet but that’s because of lack of anglers. My trip this week was to the golf course beaches at Frinton, to fish an afternoon flood tide and the fish were certainly feeding. I fished ragworm baits mostly at distance and had a very enjoyable few hours. I ended the session with five bass to 2½lbs, three eels, a small hound and a rare plaice, all the fish were caught on ragworm.

Colchester Angling Club fished the Jaywick beaches for a night match at the weekend and to be honest fish were hard to find. The wind was slight and it was a very warm evening, bites were slow but some fish were caught; 1st Mark Peters – 2lb 6oz, 2nd Chris Mills – 1lb 3oz, 3rd Ted Gower – 9oz. Heaviest round fish, a bass of 1lb 14oz for Mark Peters.

St Osyth beaches have also been a bit hit and miss. After dark is the best time, with a few thornbacks being caught. Clacton angler Matt Clark fished here and landed a stingray around the 15lb mark. I have also had reports from other anglers that stingrays are being caught from this venue.

The boats this week have had a reasonable week with hounds, bass, rays and now tope showing.

The Mersea charter boat Eastern Promise skippered by Derek Moles has been among the fish this week. On board one of his trips were local anglers David Mynors and Andrew Barnes, and they had a good day catching bass to 6lbs, some double figure smoothhounds and a few tope which fell to whiting baits. Sophie Lea Charters have been catching some of those bigger bass this week with the biggest weighing in to local angler Sean Smith with a fish weighing in at 11lbs 5oz.

A new event is to start this weekend on Clacton seafront, called The Sea and Beach Festival. The festival is being run by Tendring District Council, and will include water based activities and sports. The Clacton Boat Club will have a stand there near the west slipway by the pier.

The Bloodworm Trap – a South African Take on the Pennel Rig