The past month has just flown by and it seems like only 5 minutes since my last report. After an extended period of targeting turbot and brill interspersed with a bit of wrecking and tope fishing the Island’s main season is now in full swing with a whole host of species to target.

Visitors to Alderney have experienced another cracking year for the turbot and brill and they are continuing to show in decent numbers and sizes. With an unhurried drift under a gentle wind catches of 10 to 20 fish are possible even at this quieter time of year for the big flats. Best fish reported this month was one of 17lb caught aboard Offshore Rebel from Weymouth. Catches from local boats have generally been averaging between three and eight pounds. The brill that are showing are still of good size with a fish of 9lb plus being brought aboard another visiting Weymouth charter boat, the Wild Frontier. 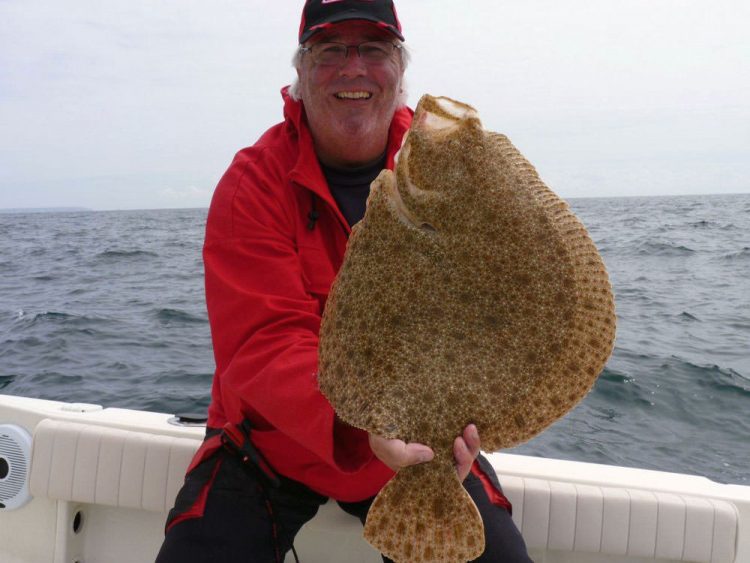 Tope fishing is full on now too after a short lapse towards the end of June. This week’s best tope reported was one of 48lb caught aboard Peace and Plenty. Once the shoals have been located you can catch as many as your arms will allow and its not unusual on a charter boat too see half the crew with rods bent battling with these powerful mini sharks.

Most tope are found around the reefs surrounding Alderney and these areas offer a good mix of fishing. Black bream to 3½lb have just arrived; these are the first of the fish coming back down the Channel to the Western Approaches and these should stay around the Island until Christmas. Although not a target species the colourful cuckoo wrasse also frequents the hard ground reef marks.

One or two triggerfish are often caught as a by catch when fishing for the bream, they tend to fall to the rods using worm so it’s worth trying a bait change and peeler will often pick out a trigger. For the bigger fish angler dropping large baits on the hard can produce huss and conger eel which are also around these same rough ground areas. Alderney sees a good stamp of huss with double figure fish a common occurrence and reef eels run from 20 to 50lb.

Move off the rough ground and onto the softer sand and the chances are you’ll encounter another sort of bream you probably haven’t seen in your local waters unless you live in the SW of England; the Couch’s sea bream. This species of bream is becoming fairly regular here, often caught when charters are anchored up close to the island sheltering from any bad weather for comfort and fish to 2¾lb have been reported this month. There are plenty of gurnards about with both the red and colourful tubs featuring in the bags lately. Best tactics of the gurnard is to use small fresh mackerel strips with sequins and attractors spoons on the hook snoods.

Although the bass are not around in great numbers fish to 6lb have been reported with boats managing got get 10 or 12 on reasonably short sessions. This month will see a massive improvement on both the numbers and sizes of these silver torpedoes.

On the wrecks we have seen some good pollack fishing in the Hurd Deeps which lie only 8 miles from Alderney. Double figure fish still likely at this time of year unlike a lot of the other wrecks further north which offer only smaller summer fish. Some good cod are being caught as well with some cracking fish knocking on the door of 30lb reported from the visiting charter fleet. Excellent ling are present on the wrecks with Tiger Lily finding fish to 26lb together with conger to 70lb.

The bulk of the shore sport consists of the normal excellent pollack, garfish and mackerel fishing. On top of this we have had some really good bass fishing, unusually early this year from the shore. Top rod is Dave Young who had 18 fish on a Savage Gear Sandeel in his best session, and Dave has been averaging three to six on his outings. No big bass yet with the average size around 2lb. Targeting the bass is a roving game as they can appear anywhere with regular moves from mark to mark required to locate the feeding shoals.

A welcome surprise has been the numbers of plaice around the clean ground venues. Very little angling takes place with bottom baits (particularly worm) but the rewards have been excellent for those willing to try. Nigel Bowditch took a brace of fish of 4lb 3oz and 3lb 5oz in one session. Nigel also accounted for some nice sole with the best fish at 2lb 8oz. Thick lipped mullet have been spotted rafting up, again very unusual for this time of year but who cares so long as they feed! Blake Jackson had been keeping things quiet to himself and he has managed some good sessions with several fish topping out around 6lb with the average between 3lb and 5lb.

So there is plenty going on, as I mentioned earlier this is my favourite time of year, particularly in the boat and from now till the end of the year Alderney will continue to fish its butt off! If you come and visit us then come prepared to fish hard though, they don’t give themselves up easy.

Preparations are in place for the Alderney festival, hopefully by the time you read this you would have the regulars would have received their entry forms, if you would like them then just get in touch by email to mark@alderneyangling.com or call us on 01481 824884.

In the meantime a big thanks to those of you that do take the time and trouble to visit us, Alderney is very reliant on tourism and in these hard times your customs is very much appreciated. Here‘s looking forward to a cracking end to the summer and the introduction to some terrific Autumn sport.