As summer slips into autumn target species change even if wind and rains are inclined to persist. Also, on Alderney the emphasis switches from boat more to shore fishing. The island sports some of the finest shore angling available in the UK, and if current fishing is any indicator, then visiting anglers won’t be disappointed in the weeks and months ahead.

Boat fishing: Our normally fantastic boat fishing has only scaled the heights a few times this season. This however, has had much to do with the species that have been present. Most visiting boat anglers make the Alderney trip for turbot, brill and bass. Despite the odd good flurry, turbot have proved difficult to find with consistency all year. Those turbot that have been caught are invariably of a good size, but the absence of the run-of-the-mill smaller turbot has been an issue. 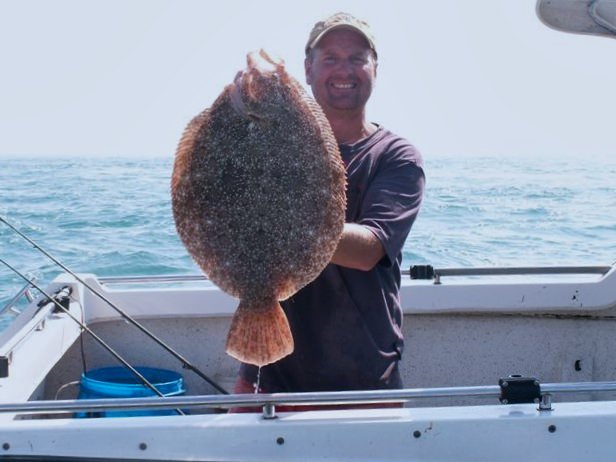 Brill arrived in better numbers this year, with fish to 9lb featuring regularly, even at the time of writing. Bass numbers are increasing all the time, but the general stamp is small unless you can get to isolated marks that regularly buck the trend and throw up some really good fish. Quite a few double-figure bass reported in recent days.

Rough ground fishing has been fantastic with plenty of tope to 55lb. There have been red letter days when every angler on a charter has been into fish simultaneously. Black bream have been around in excellent numbers for a month. Bream to 4lb offer great light tackle sport over slack tide between bassing. Bull Huss and conger are rarely targeted specifically but there are good local populations of both species. Smooth hounds, cuckoo and ballan wrasse also feature among various other regular species.

Anchoring the sandbanks on the small tides is becoming more popular. Rewards include blondes rays to 30lb, turbot, brill and bass. Switching to smaller gear and baits over the slack is producing Couches bream, red mullet, red and tub gurnards. So for some Alderney hasn’t lived up to its high standard, but there is still some terrific fishing close inshore.

Wrecking is getting harder now. Pollack are still on the wrecks however, with odd cod and ling showing too. Ling baits on the bottom also have every chance of picking up an eel or two. From a personal perspective, I wish there was someone here seriously into sharking. There are persistent reports of big fish close to the island, but no one is dedicated enough to target them… perhaps this is symptomatic of the other great fishing available.

Boat news: Colin Dukes skipper of many Smuggler boats for 30 years has relocated to the Alderney and brings his existing business with him. There are many ways now that you can get here without doing the Channel crossing, which if combined with bad weather, makes for an unpleasant experience. With good weather though it is a fantastic experience. But you have choices: You can fly to the island direct, or Colin will do pick-ups from Guernsey, Cherbourg or Dielette, making that first day travelling back to the island a fishing day. More details here http://www.alderneyangling.com/charter.htm or ring Colin on 07781 432248 or 07974 437740 depending what side of the Channel he is on.

Kayak fishing: Kayaking is catching on here as it is across the wider UK. If played safe it is a great way to combine exercise with your favourite pastime. We have found that we can get closer to certain marks that we steam by in a boat, with some tremendous results. Plugging is one of my favourite aspects of fishing, and plug-bunging in a Kayak is simply awesome. It’s something of a hunter-gatherer game of stealth – you are in a position to maximise sport without spooking the fish and there is a real buzz in going back to basic boating. Best catch for me so far is a 15lb plug-caught pollack just 200 yards off the shore… now that was fun! Bottom fishing has brought a mix of species mirroring what gets caught from the shore. Hoping to have a go for a tope at the end of the month and hopefully a blonde ray… if I don’t get towed off into the sunset I’ll tell you the tale!

Shore fishing: Currently the shore action is kicking into autumn gear, and there’s plenty to choose from. Already we have had the first shore tope: best fish to date is 38lb. Tides at the end of the month could well prove to be the best time. Bull huss in double figures have been caught and conger eels just shy of 40lb have been caught too.

There’s been some fantastic black bream reported this week, with several fish in the 4 – 5lb bracket. Best sport is on float gear, and bags of 15 to 20 are common, with 30 fish hauls not unheard of.

Bass fishing inshore has been good since May, with the bigger fish falling to baits as a rule, and smaller ones on lures. The best shore-caught bass in the last few weeks scaled 9lb 8oz. Lure caught fish averaging 4lb. One local angler, who is heavily into fly fishing, never blanked during the month of August on the fly gear.

Mullet angling has kicked off in style with numbers of fish to 6lb taken, and the best is yet to come. Bigger fish not playing ball just yet, but this will change soon… trust me. Normally the best mullet fishing isn’t until after Christmas, but this has not been the case in the last two years, so get out and get in early.

Night tides producing plenty of fish. Red Mullet to 1lb 8oz around in good numbers as Fieona (pictured right) has proven on the last couple of nights. Sole to 4lb have been caught during the summer… none particularly big recently, but not many blank sessions. Sole to 2lb 8oz are not to be sniffed at however. Red gurnards, bass, pollack, pout, black bream, Couches bream and codling all featuring.

To keep bang up to date log on to www.alderneyangling.com and go to the latest reports section.

It remains for me to thank all of you that come here for the fishing. It’s not always great but it is good more often than not. Thank you for your custom. The current credit crunch and price of fuel makes this is a challenging time for places like this that depend on tourism, and your support is very much appreciated.