Seasonal winds and freezing cold conditions ensured boat fishing has been a non-event in the main. Opportunist kayak anglers enjoyed the best of the fishing afloat, with Dick Smith and myself having a whale of a time. The bragging rights belong to Dick after he smashed the Channel Islands record for a boat-caught thick lipped mullet…

Kayak/record mullet: On the day in question, we managed to tuck out of the wind and swell. I had been there since daybreak and not managed a sausage. Mullet appeared as soon as Dick appeared later… either that or my fish repellent had worn off! On Dick’s advice we re-positioned and caught four in the next 40 minutes. Three of these were 5-6lb, with the record-breaking forth topping 8lb.The previous modest Alderney mullet record wasn’t reflective of our quality fishing, and Dick’s 8lb 7oz fish delivers a little more credibility to the list. The shore record stands a shade under 12lb, and it’s this stamp of fish we’ll aim to target on future trips. 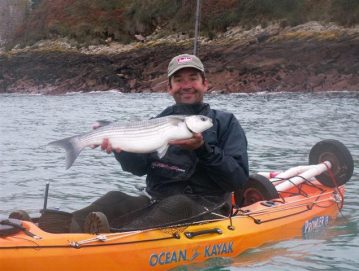 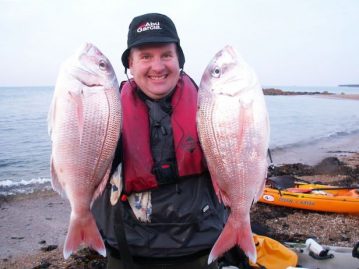 We have also done some ‘yak plugging and managed a few bass, with our best experiences at anchor. Other outings have turned up eels to near 40lb, huss to double figures, and a spread of other species including pollack, black bream and some real quality couches sea bream to 3lb 8oz. Couches are terrific scrappers and great eating. Some days have seen us enjoying over 100 fish… which is the best way to keep warm when you’ve lost all feeling in fingers and toes!

Shore: Shore sport has been pretty good. There have been good numbers of bass with the best of 9lb for local John Copeland. In recent days some lads over from Bristol had a cracking plugging session with 10 bass to 6lb.

Mullet sport has been terrific at times with a couple of large shoals moving around the island. Fish to 9lb have been landed but those damn seals seem more adept at catching the larger fish. Our furry friends have been spotted munching fish to reputedly 15lb on the rocks and beaches. 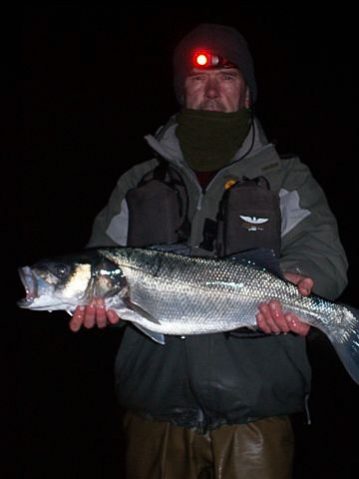 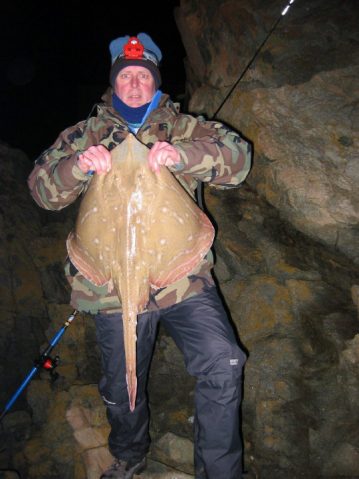 Species and prospects: Red mullet and sole have been rare since autumn and we wonder if we’ll encounter any more now? Any sole we do get during this period tend to be large. We have seen a good run of small eyed rays, with fish to 11lb 2oz among them. I also managed undulate ray of 12lb 9oz. There are plenty of eels around, and my best night guiding resulted in four fish to 25lb. Eels nearer 35lb have been landed however. Good bull huss are very possible now, and daylight fishing has seen ballan wrasse to 6lb. Codling to 5lb have also turned up on the beaches when other species have been the target.

I’ll sign off by wishing you all well with whatever fishing you do, and thanks to those that take the time and trouble to come to the island to experience the fishing. It’s five years I’ve been here now, and familiar faces have become friends.

Hope to see you again soon.