Shore angling should be at its best now but with very few anglers visiting the island it is hard to grab a handle on what is out there, in addition, post festival the locals are sticking to squidding off the quay or they have put their rods away until next year.

My own efforts have been focused around my Species Challenge and where possible getting afloat in the boat to take advantage of the weather windows. I have had some excellent results afloat particularly in and around the rocky gullies lure fishing for bass. The superb Savage Gear Sandeels have been extremely productive to the extent that these eels out fish my plugs to the point that I may stick the hard plastics on Ebay. The venues fished at this time of year have tidal flows of between 2 and 6 knots, in depths of water from 8 to 35 feet, with the fastest flow in the deeper water. 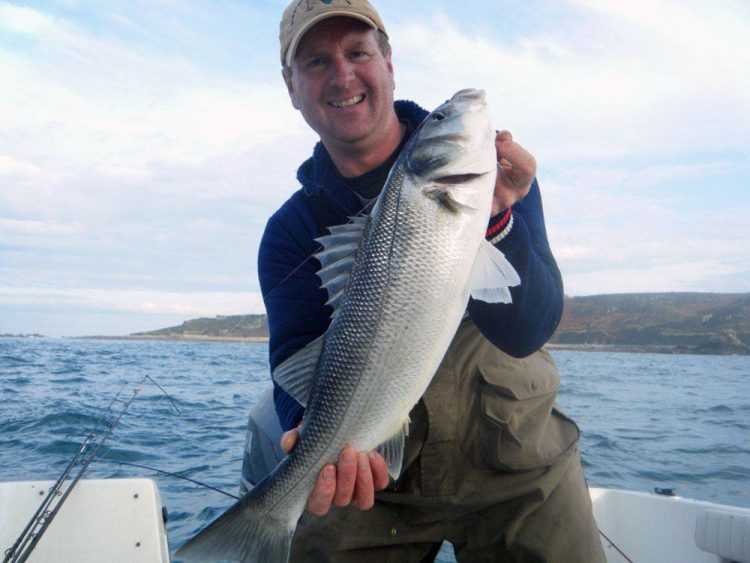 The more extreme areas produce the best bass but with the depth, overfalls, strength of tide and pinnacles to contend with it can become expensive as you try and run your plugs hard to the edge of any obstruction across the tide. The Savage Gear Sandeels have given me a different option though. I can run them deep quicker and generally get the retrieve in before the lure is swept around any barnacle clad rock. If the kelp grabs hold generally this lure can pull free, something a plug rarely does. Another benefit is the casting distance, they are much better than most plugs for casting so you are able to use a more stealth like approach to your fishing from the boat; keeping a better distance to where you believe the fish to be holed up out of the current. On my last session I used the second largest of the set to good effect but only switched to this when I had exhausted my plug options, 100g got the lure down and swimming in the current really well, first cast on this particular session saw a fish at the boat but not netted. Second cast as I drifted away I hooked a 2lb 8oz fish. As I drifted on the current its strength eased away so a switch to the 42g sandeel proved the dog’s doo dahs as I hit fish after fish. In two hours I managed 11 Bass to 6lb plus as well as several missed fish before the tide finished and the bass went off the feed. Nothing near the double figure mark but terrific sport nonetheless.

Two other trips of note afloat I was targeting undulate rays on both occasions, not widespread around the island but I needed to try and complete my 50 different species target I set myself for 2011. On the first of these trips I fished a mark I have fished several times with no joy, mainly because I didn’t know how the tides operated around the small target area and previously my visits had been at the wrong time of year. Being late autumn I was more than content to give it a go and I got my anchoring spot on based on my previous experiences, so we weren’t continually spun around like a washing machine on a fast cycle. There is nothing worse when anchoring than to be dragging your weights around the bottom snagging any lump of rock, and you also miss the opportunity to build up a scent trail. Between my fishing buddy John Weigold and me we had a cracking time with black bream to 3lb, a brill of 7lb, three blondes in to double figures, red gurnards and a stack of lesser spotted dogfish to keep us on our toes. As darkness fell, the bull huss came out to play, somehow John missed them all whilst I finished up with six all, except one, around the double figure mark. We only headed home when our bait supplies were depleted.

The second trip was on a recently discovered mark, very close to the harbour but never fished the seas can be turbulent. I took the opportunity to fish the mark during a calm spell in September and quickly realised its potential when I finished up with 12 species during the session including couches bream, plaice, blondes, small eyed ray among others. On the subsequent visit conditions were not so kind but being utterly desperate for that undulate ray to add to my species count for the year I gave it a whirl. Well it gave me a whirl actually, I got beat to bits as the chop and swell increased. Despite the adverse circumstances the trip turned out a great day. First drop saw an 18lb blonde grab the bait and after dropping a good fish on the down tide rod the black bream moved in. My ray baits were getting smashed to bits as 3lb plus bream hung themselves on 5/0 hooks. No undulate but a memorable session afloat.

My shore fishing has been focussed on catching a three bearded rockling, not one of the monsters of the deep. After loads of outings trying throughout the year I have finally managed to nail one to give me 49 species from Alderney this year. Five weeks to go to lure the final one of the target 50.