Steve Parker heads out of Weymouth for a day aboard Atlanta skippered by Dave Pitman and despite poor weather and tides he enjoys a day seeking out different species.

“Bream and gurnards please but absolutely no pollack!”, was the departing shot from my Mum as I headed out along the Devon coast enroute for Weymouth. The forecast was for the wind to freshen throughout the day but when I arrived there was no breeze at all and it looked to be a perfect day.

I had packed my Savage Gear 7g – 30g Butch XLNT bait casting rod and Abu Black Max bait caster as my primary weapon with my Kenzaki 6lb boat rod as a mackerel stick and backup in case the tide was too much for the light gear. With eight of us aboard today including Lightwater Mick and Jim plus a handful of holiday makers we left to a picture perfect view of the harbour visitors.

The previous three days had seen the annual Weymouth Conger competition take place and our skipper onboard the Atlanta said the mackerel had been prolific at the entrance to the harbour the previous day. We stopped just a few minutes from the port and lowered away. Jim was first in and then we all found mackerel fishing like I hadn’t experienced for years. String after string full houses came aboard. With so many fish being caught I was able to put my rod down and get some snaps which had the dramatic benefit the darkening sky. 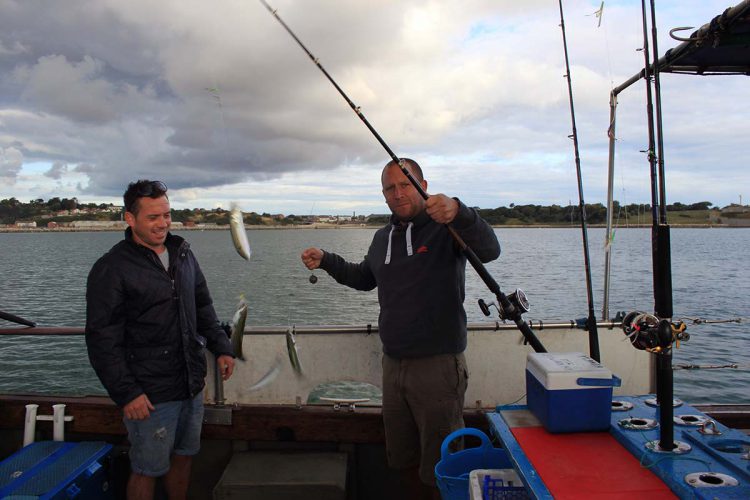 The bait cooler was rapidly filled and we headed off to the west side of Portland Bill in search of some mixed species action on what remained of the ledges in Lyme Bay. As we headed out to sea a weak front brought in some thick low cloud which made for some nice photo opportunities.

We were soon at anchor but the stiffening breeze was holding us at right angles to the tide and waves. I was fortunate that I was on the side of the boat that enabled me to trot back in to the tide without crossing the other lines so I was able to use my light gear all morning.

I rigged with a new home made Wessex Rig, which Dave had shown me how to tie last month, and baited with squid and mackerel. Each hook was decorated with a bead, a small yellow muppet and a silver sequin. This bling rig quickly proved that the mackerel were everywhere and I was hit instantly. It took me two more drops to get to the bottom with fingers crossed that I still had some bait left. The answer must have been affirmative as the rod tip indicated a small but aggressive rattle that wasn’t a bream but I was also sure it was not a rubbish fish like a dog or a pout. As I reeled in the line got heavier and I knew I had picked up another mackerel on the way up. The result was a smashing red gurnard – one supper for Mum secured. 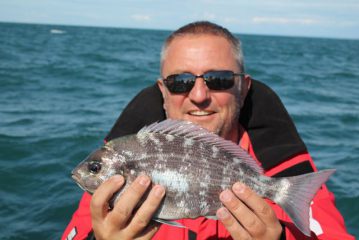 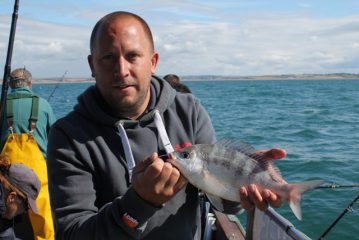 I re-baited and lowered away again with lots of mackerel hits on the way down I kept going in the hope I would get to the bottom with at least some bait intact. Another rattling bite and I was in to another gurnard. Again the load got much heavier and much livelier on the way up and this time I had two mackerel and one nice gurnard – but only two hooks? I was using a brand new and shiny 3oz lead and it appeared that one of the mackerel had hit the lead and managed to unclip the swivel. The lead had dropped off but the mackerel was hooked on the swivel clip – what are the chances. Two drops and half the order fulfilled – the day was going well.

Elsewhere on the boat the anglers were finding dogfish and some more gurnards. A small smoothhound came to one of the holiday makers which would be the first of the desirable shark species we would encounter today. Sadly one of the guys had also become ill and was unable to fish. It is amazing how people can suffer no effects from sea-sickness while underway but as soon as the anchor goes down they suffer dreadfully. 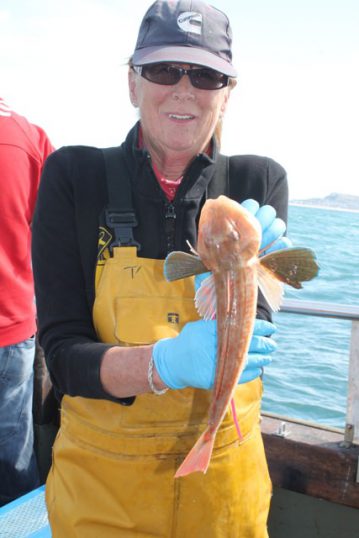 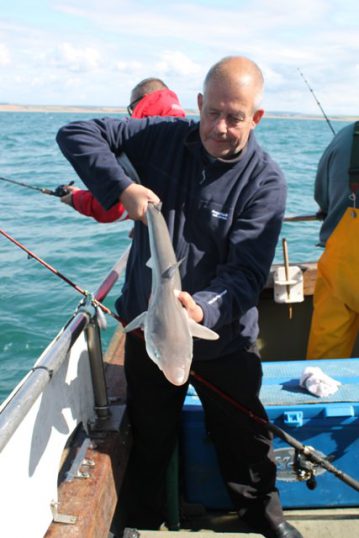 A little while later the bream turned up as the scent trail built up. I had swapped my rig for an ‘undecorated’ version to try and dodge the mackerel which were a real nuisance. This seemed to improve the situation a bit and when the bite came it was unmistakably a bream rattle. Behind me another chap was in to a lively fish that was no doggie. He was delighted to land a small tope which gave him a nice scrap on his bream rig.

I then managed my own tope on my bait casting rod which was a great tussle on this gear before following up with another bream which were now coming regularly with fish falling to rods all around the boat. Dee topped the gurnard charts today with a smashing tub displaying the characteristic blue fringed fins.

As lunchtime approached I spotted a large aircraft coming towards us at quite a low altitude. I grabbed my camera and rattled off some shots of the plane identified by Dave as a Hercules.

The chap who had become ill when we anchored was showing no signs of improvement and continued to suffer. Dave made the prudent call that we needed to try and get him to a point where he stopped throwing up so his condition didn’t become a more serious problem. We would head back to the east side of the Bill where we would have shelter from the freshening breeze and the worst of the swell. As soon as we were underway he felt much better and Dee was able to get some sea sickness tablets in to him which then had a chance to work as we switched marks.

When we got to the east side the wind had freshened further and the Mussel Beds would be similarly uncomfortable for our sufferer so we tried a mark closer in to Portland. Jim was soon into a fish and it was another small tope.

At this mark we had the opposite attitude towards the tide so I switched to my heavier rod so I could fish 8oz of weight and stay out of the way of the guys down tide of me. Encouraged by Jim’s success I switched to a 2/0 hook and a mini flapper made from a Joey mackerel. I soon had a bite and the result was a strap conger of about six pounds – not one that would have troubled this weeks’ competition but another species for the day. 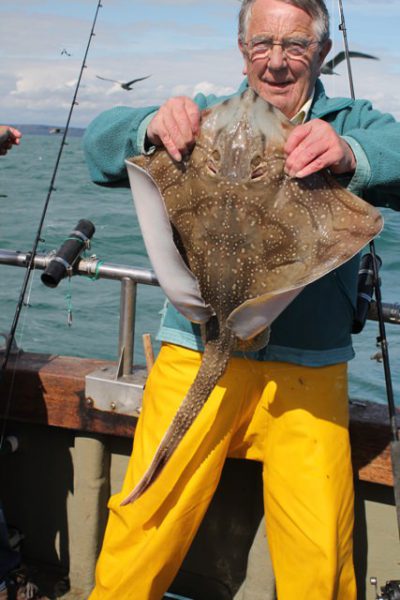 Dave asked if I wanted a proper conger trace and although I only had a 6lb rod I thought ‘why not’. Dave baited the 10/0 hook with a whole cuttlefish and a flapper and I settled in to wait. It was not long and I had a bite. I wound down in to a fish that was certainly no conger but felt livelier than an LSD. The result was a small bull huss, only a few pounds, but yet another species for our tally. The huss wasn’t hooked but had the bend of the hook wedged in its mouth. A day for unorthodox capture methods it seemed.

I switched back to a smaller hook for the last twenty minutes as there didn’t appear to be any big eels in the vicinity. I cursed however when a few minutes later Jim bent in to a much heavier fish – a conger we all thought. Jim was not convinced and then he started to make ground on the fish. The result was a smashing undulate ray of around 12lbs. There was no doubt that Jim was top rod on the day and this was the icing on the cake. A quick snap and we watched the ray right itself in the water and slip back to the sea bed.

Today had felt like hard work to find some fish but as I look back on what we actually caught it is surprising how a species tally can mount up. We ended up with 10 different species on a day when weather and small tides could have spoiled our chances. We even kept the sun for most of the day. Hopefully I’ll get out again soon then it will be a case of ‘roll on autumn’ and who knows what we’ll catch – a big ballan wrasse maybe?