Virtual sea angling in the flesh

The flourishing Internet Angling Club has birthed strong cross-border friendships, with anglers stepping out of the virtual ether to regularly travel hundreds of miles to fish together. Ian Lindsay divides his spare time to both indulge his travelling passion for catching different species, and help his IAC pals experience what’s on offer in his own Northern waters.

Unhappy times, some might say, for the 300-year-old Union between Scotland and England, what with the SNP running the show in the north, David Cameron’s Tories hoping to take up the reins of power in the south, and a whole lot of sparks flying between the nations on a host of political points. Yet fishermen don’t let such boundaries get in the way of their leisure, do we? I’m a member of the IAC (Internet Angling Club), a UK-wide web group that unites anglers under a common banner, no matter which neck of the woods they hail from. It didn’t really start that way; the IAC Scots and the English existed (in email terms) in generally well-defined separate spheres, though of course we all saw each other’s reports and in our own ways, occasionally wished we were there! 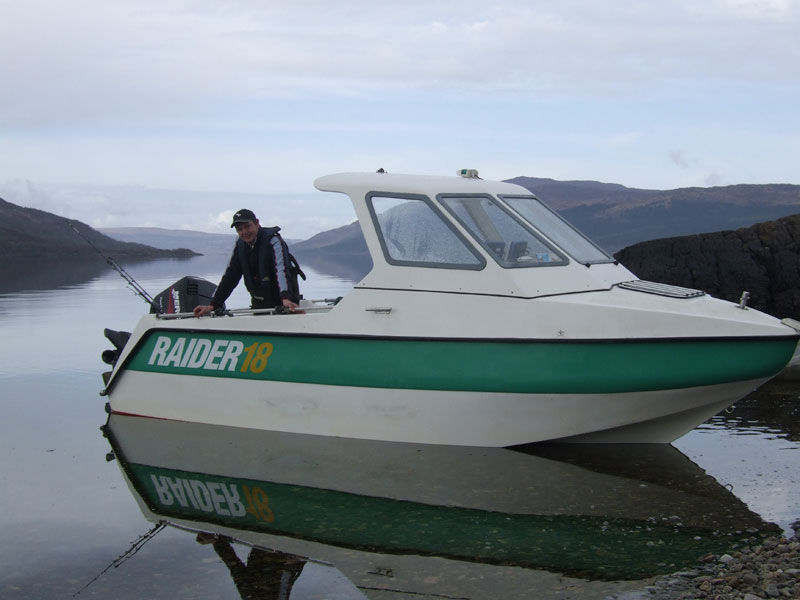 Gradually the imaginary barriers came down – much of the initial credit going to the expansion of what began life as a two-man species race between a couple of southerners, Steve Marley and Dave Huxley, into a free-for-all open to any IAC member with a boat. This competition is called the ABR (Annual Bragging Race), and there’s been a good spread of winners from both sides of the border since it began in 2003. Some bright spark then floated the idea one day that wouldn’t it be great if some of the Scots could head south for a ‘southern fish-in’ with a northern equivalent to allow the Anglos a tilt at some of our hairier tartan-finned fish? Chris Tier, skipper of the 31-foot Mitchell Tamar Lady and all-round good guy, was the obvious candidate to help out in the south, while Davy Holt, skipper of the big catamaran Catchalot II who catches common skate as regularly as others get pouting, had to be the man who could rustle up something special for the Southern Softies (a term of affection, I assure you!).

And so it began – with a gaggle of Scots heading south to tackle odd (for us at any rate) species like smooth hound, black bream, tope and blonde rays, while a stream of English anglers lined up to be put through Davy’s very own mill of pain tackling fish sometimes heavier than themselves! All this has been ongoing for a number of years now, strong friendships have developed, and some cracking fish have been landed, topped by a 200-pound LA skate for lucky ol’ southerner Dave Samuel. The format worked well, but for a change I invited Chris up for a tilt on my own boat, a Raider 18, at a common skate. He elected to bring along our mutual pal Pasty Pete Brunton, while I brought along another good friend from the IAC, Doug Kinnaird, to do all the work.

Fishing-wise, the exercise failed to produce some of the fireworks of previous skate trips with REAL expert Holty, though in truth the main problem was that our venue of choice on a small tide – Lochaline – had been fully booked months in advance by a 50-strong party of divers! So Loch Sunart it had to be, by no means a bad spot but best fished on a stronger tide. Our dates had been set some time in advance, and we had to make the best of it. Still, first day, we achieved our objective – though it was by no means easy! Chris and Pasty were fishing skate gear while Doug and I chased spurs to give them a clear run at a biggie, but the action was desperately slow, and with time running on, after Chris failed to hook up a fiddly offer, I decided I needed to lend a hand. 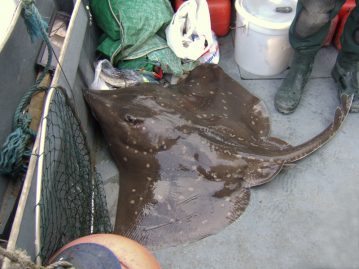 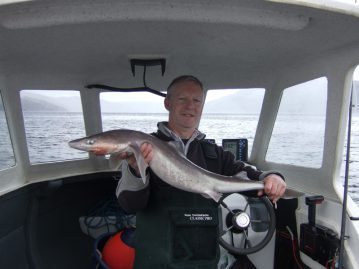 So I set up a third skate rod with a nice St Andrews coalie on the end, stuck it down, and hey presto – within 20 minutes the little skate which had bothered Chris’ bait was back. Pasty was the lucky man on ‘strike’, and after a routine battle brought up a pretty little female skate of 51lb. A small example of its kind, maybe, but a fish big enough to bring a broad smile for the big Devon ‘lad’! That was the only skate action of the trip, but spurdogs to 11lb eased the pain a little, we all had a grand time on the social front at Resipole and Salen, and in any case there was another chance to share some great action later in the year down south.

October is a prime time on the south coast, and Chris’ home port of Hayling Island is awash with possibilities. Sadly, Doug couldn’t find time to come along, so I was on my own as I flew from Edinburgh to Southampton with a set of waterproofs, some travel rods and not a lot else. Next morning we set out at a civilised 9am aboard Tamar Lady, and the weather couldn’t have been any better if we’d picked it ourselves; tee-shirts were very much the order of the day as we headed toward the Isle of Wight for a crack at a southern cod. Coals to Newcastle for me perhaps, but what southern cod may lack in numbers, they make up for in terms of average size! The crew this time was myself, Chris, Pasty and another of their pals, John Irwin, whom I’d met a few times at Southern Fish-Ins but never seen in action. It soon became clear John is quite a performer, as he showed by landing a nice bull huss pushing 9lb, quickly followed by a surprise pollack of 6lb 6oz. By this stage I’d managed just a 1lb whiting, and Pasty had landed a 15lb conger, so it was with a certain air of desperation that I elected to try some Scottish tactics with a set of tinsels baited with soggy mackerel strip! In truth I was hoping for a bigger whiting, but what I hooked within seconds was a fish that fully tested my 20-30lb Penn Waveblaster – and out of the strong-flowing, murky water popped a pollack even more surprising than John’s at 9lb 8oz. 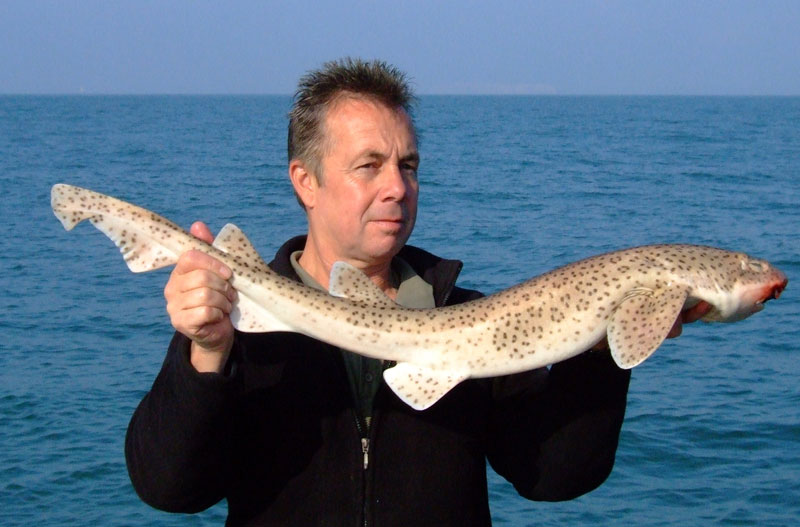 As the tide strengthened, the congers came on strong – and we ended the day with 11 to our credit. I had the best of them at 22lb 8oz, a PB, so it was turning into a good day! The tide slackened, the congers quietened down, then at slack Pasty hit a fish that put up solid resistance and he observed, “This feels like a cod!” Sure enough, a nine-pounder was soon bulging the net. A marvellously pale, almost washed-out looking fish compared to the sort I catch on rocky ground in Scotland, I still knew I wanted one.

Still, the star of the day, John, would get in on the act next, and I couldn’t help but chuckle at the calm way in which Pasty and Chris were discussing bait as John hung on for dear life on the other side of the boat! The powerful beast on his pennel rig was no match for the star angler in the end though, and he was soon cradling a personal best cod of 19lb. Not long after, I got my cod right enough. I could tell it was nowhere near as special as the last one, but at 7lb 8oz it was still a nice way to end the day. 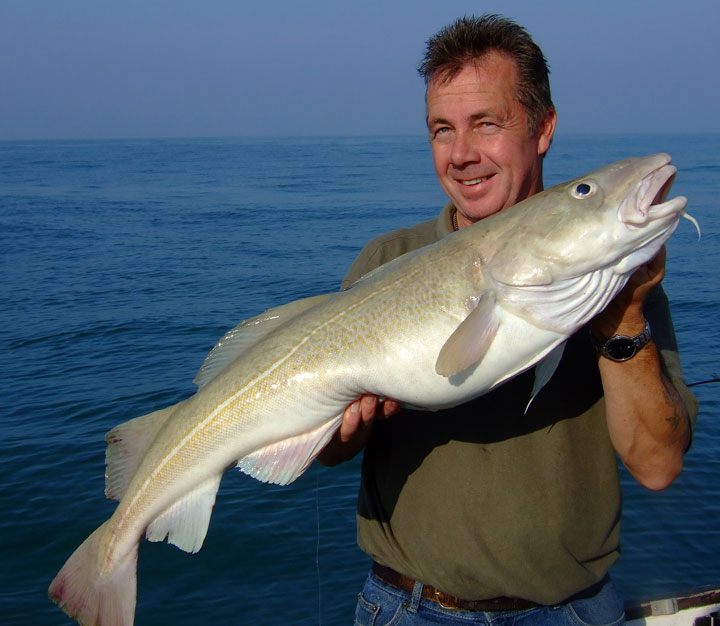 Next day, and with the tides building and some numpty curtailing the possibilities because he had to fly home, we headed to the Medmerry Bank to try for rays. For some reason, though I’m a competent thornie catcher in home waters, these southern rays don’t like me much – but all that changed early on as a swift double-tap on my uptider indicated a bite. I was in, but clearly this wasn’t one of the biggies Chris and Co. contact regularly – still, even a pound-and-a-half blonde ray seems OK when it’s your first! Thereafter the English trio
demonstrated how it should be done with a string of blondes and small-eyed rays, though none topped 8lb so I didn’t feel I’d missed out too badly.

A Raft Of Species 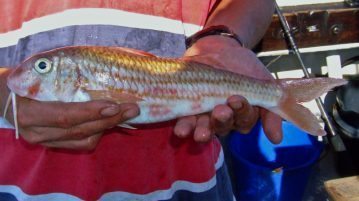 Next up, Chris was keen to have a tilt at plaice, and again this is not a species I’ve had much luck with. After some bait-wrecking small black bream had spoiled our prospects for a while, I wasn’t even watching my rod when a solid take pulled the tip down hard, and I soon brought in a hard-fighting plaice pushing 2lb.

However, I was soon upstaged by the skip, who astounded all aboard by bringing in a red mullet of 1lb 2oz! Chris kept up his form, bringing in a cracking plaice of 3lb 6oz, followed by another of 2lb, while Pasty got a nice one just under 3lb and John had a smaller flattie, before filling a bucket full of late-running mackerel. Alas, all too soon it was time for home. A pity, as were on the cusp of the best part of the tide – but scheduled flights wait for no man. Over the piece, then, a couple of memorable trips – but surely the best thing of all is that no matter what the politicos might think, the Union of angling is as strong as ever.