Uptiding is no black art and should hold no fears for those who haven’t done it before. Holyhead charter skipper, Gethyn Owen knows and understands the benefits of being able to cast a baited rig away from the boat and getting it to stick in the tide only too well. He explains this simple technique and the required tackle here.

As far as the UK is concerned the technique of uptiding was pioneered in the late 60’s. Leading proponents Bob Cox and John Rawle operated famous charter boats out of Bradwell on the Thames estuary, and Cox’s book ‘Uptide and Boatcasting‘ is recognised as the definitive work on the subject. These innovators realised a scare area is created around a boat when fishing in shallow water. I personally take ‘shallow’ to mean depths of 60 feet or less. When at anchor, a boat and the people on it can create all manner of noises – from waves slamming into the hull, rope slapping in the sea, to simple things as anglers making a noise when moving on deck. It is believed that these noises, magnified in the sea can scare fish away from a feeding directly beneath an anchored boat. There is also a belief that the boat’s shadow, cast on a sunny summer’s day deters fish from feeding in the affected area. Taking all these factors into account uptiding or boat casting as it is often referred to has significant merits on certain venues. 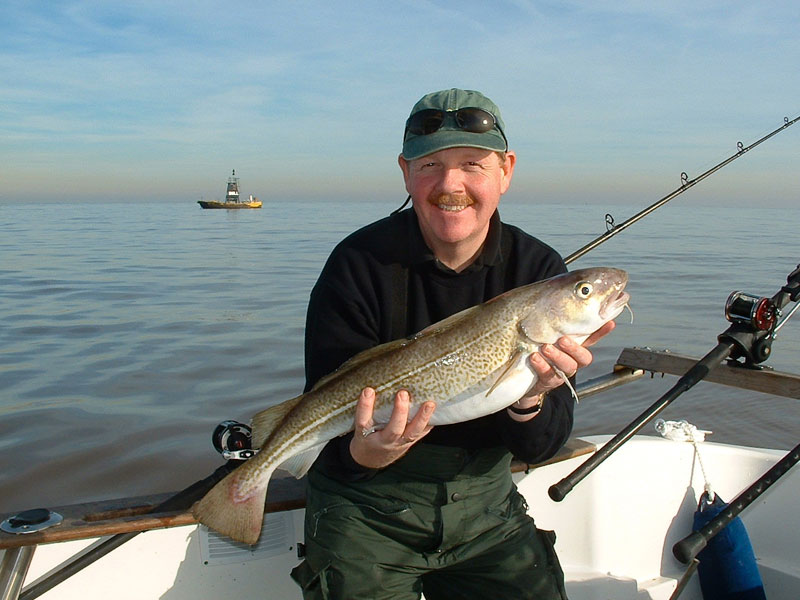 Uptiding can also come into its own when drawn near the boat’s cabin and unable to trot downtide for reasons of tangles and interfering in other anglers’ space. Casting ‘up’ or ‘across’ the tide can help you locate those additional fish. Uptiding is also an extremely effective manner of fishing in areas of strong tidal flow as less weight is required to ensure baits stay nailed to the bottom. The River Mersey is a prime example of a strong tide venue, where uptiding for cod and anchoring the baits on the sea bed can prove very rewarding.

At Holyhead on Anglesey, skippers recommend uptiding for tope in areas such as Langdon Ridge or in the shallows of Holyhead Bay. However, out on deep water marks like ‘The Deeps’ downtiding is more productive. Rays move in to Anglesey waters during March and April, while May sees the smoothhound fishing picking up. Uptide tactics are proven for both species on the shallow ledges around Angelsey.

Uptide rods vary in length and price but you generally get what you pay for. Rods of between 9ft 6 in and 10 ft are the standard, and most will comfortably handle 4 – 8oz of lead and a decent sized bait without any problems. The Abu Suveran Uptide and very different Fladen Maximus 10ft are personal favourites for boat casting. The Fladen in particular is a powerful rod which will cast up to 280g (10 oz) yet still has a flexible enough tip for superb bite detection and presence in the tide. 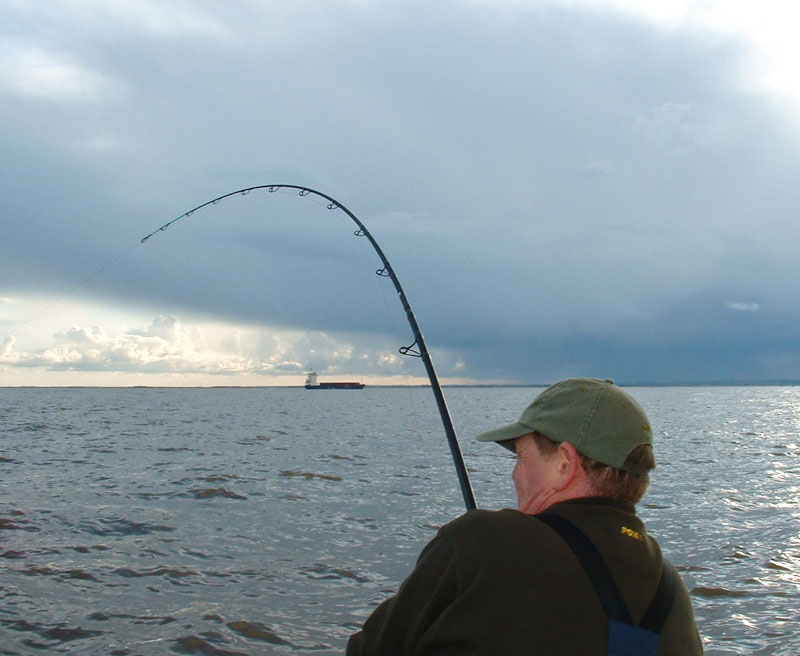 There are reels to suit all budgets, but again quality tends to be reflected in the price. Remembering that casting is an integral part of this process and therefore big ungainly winches that suffice for downtiding are not appropriate. Reels such as the Abu 7000, the Daiwa Slosh or Saltist ranges are superb for uptiding. A decent fixed spool reel will also do the job for boat casting particularly if your casting skills are not the best. I recommend mono lines of 20 – 25lb breaking strain on the reel. Uptiding is more of a gentle lob rather than any power cast but I still insist on a 40 – 50lb shockleader which has the two-fold function of providing some extra thickness for the purpose of abrasion resistance at the business end. 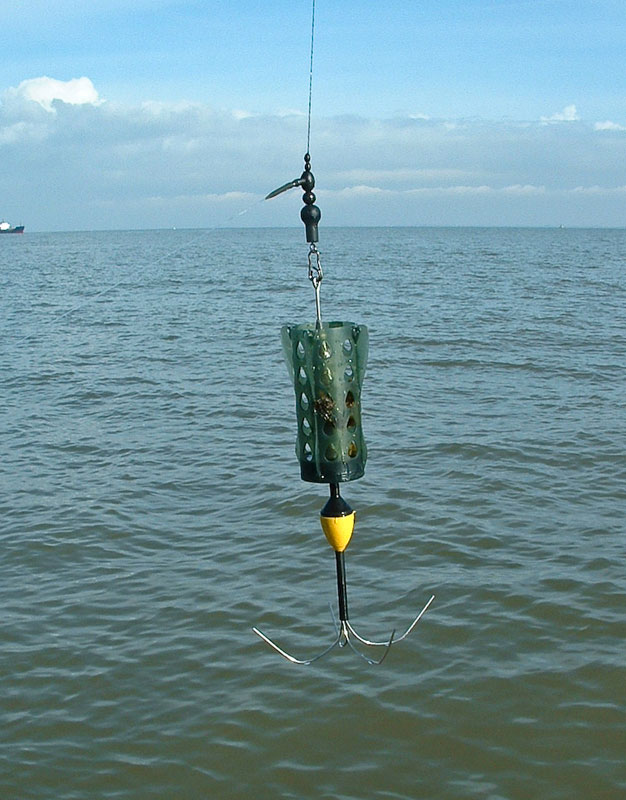 Rigs are dependant on the target. The most important thing to remember is to keep it simple. Highly intricate rigs or boom rigs with long snoods have a tendency to tangle, but as with most things, practising the cast can often overcome this problem. The Dvice is starting to prove popular for uptiding because the bait is safely housed within the capsule for casting. As uptiding techniques lend themselves to targeting the larger species, a single snood with pennel hooks is very popular.

Leads designs and weights vary depending on the ground being fished and more importantly tidal strength. Fixed wire or breakout type leads are generally best. These help to anchor the trace on the seabed and prevent it from rolling downtide and kiting up in the current. Slightly heavier than normal leads with long nose wires aid better uptide gripping. Fixed grips prove to be more effective in particularly strong tides, but breakouts work well when uptiding in less tidal flow.

Good casting is the most difficult aspect of uptiding to master. For safety reasons casting should always commence with the lead and trace outside the boat. The cast itself is therefore no more than a lob that can be an overhead punt from the stern or opposite side of the boat in some circumstances, or no more than a simple underarm flick. More casting power can be dialled in to push tackle further up or across tide once the awkwardness of casting from a crowded, moving boat is mastered. The deeper the water and the stronger the tide, the further you need to cast to ensure that the bait remains where the fish are feeding.

Having steadied yourself for the cast, gently lob the rig/lead beyond the scare area. The normal practice for downtiding is to maintain a fairly tight line, thus maintaining contact with the tackle and lead at all times, while the opposite of this is true when casting uptide. When the lead touches the seabed it is vital that you continue to pay out line. In so doing, the tide will catch the bellying line, pulling it down-the-tide away from your lead until the line is around 45 degrees from your original casting position. A large bow in the line is created and the grip-lead is soon pulled into the bottom, anchoring the rig and bait in position. 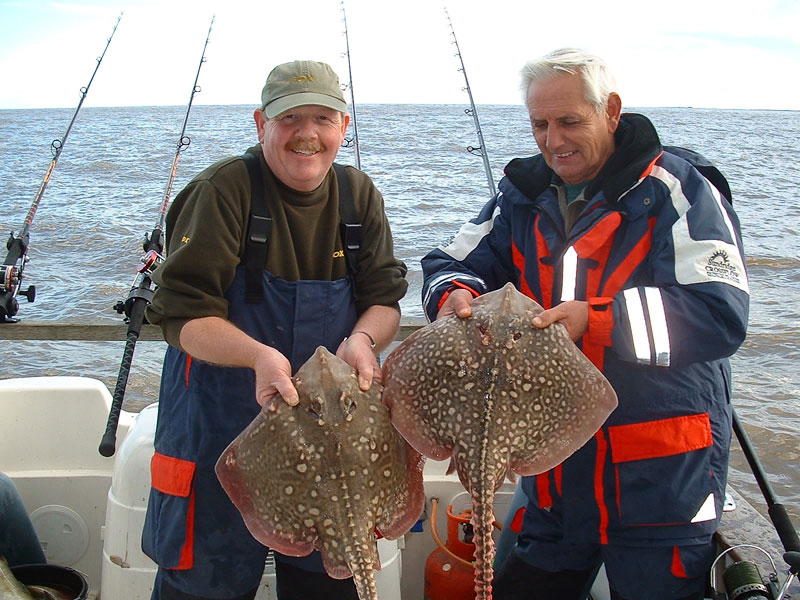 Failure to let out sufficient line or selecting too small a weight will result in the grip lead pulling free immediately, sending tackle hopelessly downstream of the boat. Anglers knew to uptiding offer suffer from not paying out enough line. A simple tip if perhaps fishing a venue for the first time and uncertain about how much slack line to ship, is to pay out double what you think necessary. 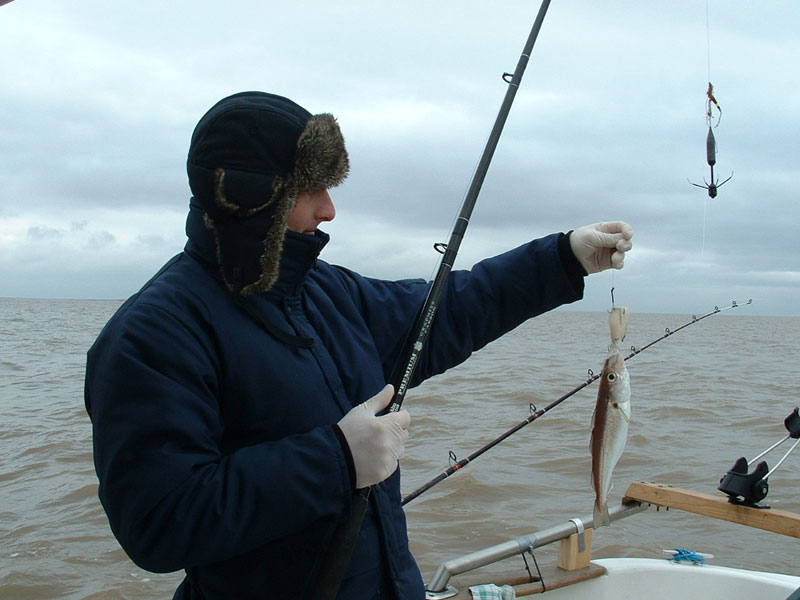 With the rig on the bottom the rod is rested against the side of the boat, as you stand back and wait for the bites. Don’t be in a hurry to wind in at the first sign of interest. Wait for the rod tip to pull down and spring back – a sure sign of a better fish dislodging the grip-lead – before picking the rod up, pointing it straight down the line, winding quickly to catch up the slack before lifting into the weight of the fish. There should be no need to strike. On contacting the attached weight of the fish, lift the rod to set the hook.