The fishing grounds off the Isle of Wight offer some excellent early season opportunities to catch Blonde rays. Des Westmore takes a trip on charter boat, Southern Star and describes the best tactics and tackle for success.

In many parts of the country the first three months of the year pose the biggest problems for finding a mark offering decent prospects of any fish, let alone a big one. For a long time, this was thought to be true where I live and January, February and March were often spent forlornly hoping for the last gasp winter cod on the inshore marks, or the first of the spring pollack offshore. Unlike ports like Plymouth, the Mid Channel wrecks between the Isle of Wight and the Cherbourg peninsula do not offer a winter pollack season. I ought to say though, that while cod are usually scarce inshore at this time, it is not uncommon for the biggest of the season to turn up at this time having snaffled a giant bait. The biggest I can think of was about six years ago on Vernon Everett’s charter boat. It weighed 34lb and took half a dozen squid on an 8/0 pennel rig. 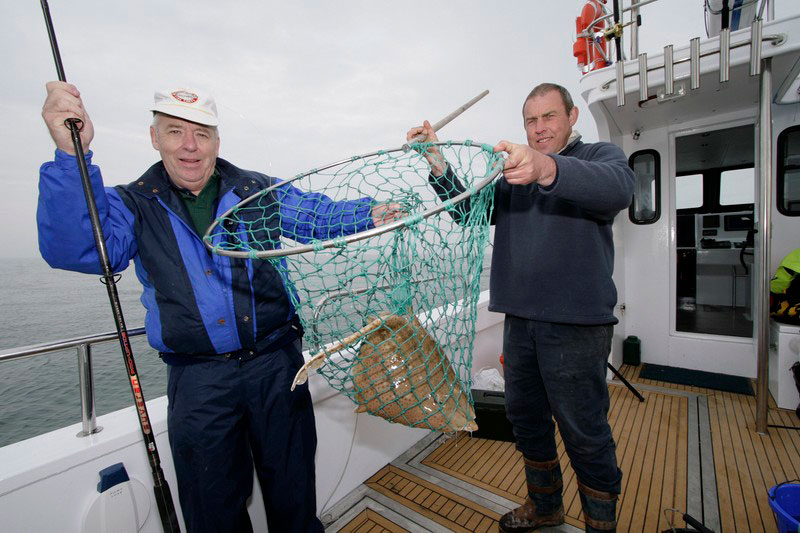 In recent years anglers and skippers in the know have found that the banks south of the Isle of Wight produce some superb blonde ray fishing. Among those was a ray of 38lb 9oz caught by local angler Ian Dobson in March 2000 which held the British record for a time.

The weather makes any boat trip a lottery at that time of year, and on top of that, the banks seem to either fish very well or downright terribly with no middle ground. I focused on the potential highlights and selected the blonde ray banks out of Lymington as the venue for a trip with a bunch of anglers aboard Greg Woodford’s catamaran, Southern Star. Our crew was a lively bunch of pleasure anglers consisting of Kevin Mardell, Lee Frampton, Milo Pragnell and Malcolm Collier and John Haskett. John is a sound engineer and tour manager and amongst others, has worked with the Stranglers, Jet and the Stone Gods. He spends much time abroad and it’s always difficult to get him on a trip because he is always on the road somewhere.

Despite knowing each other since primary school and sharing an interest in angling for nearly as long, this was actually the first time we had ever fished together. He had no boat gear so I sorted him out a Daiwa TDR rod and Saltist reel. 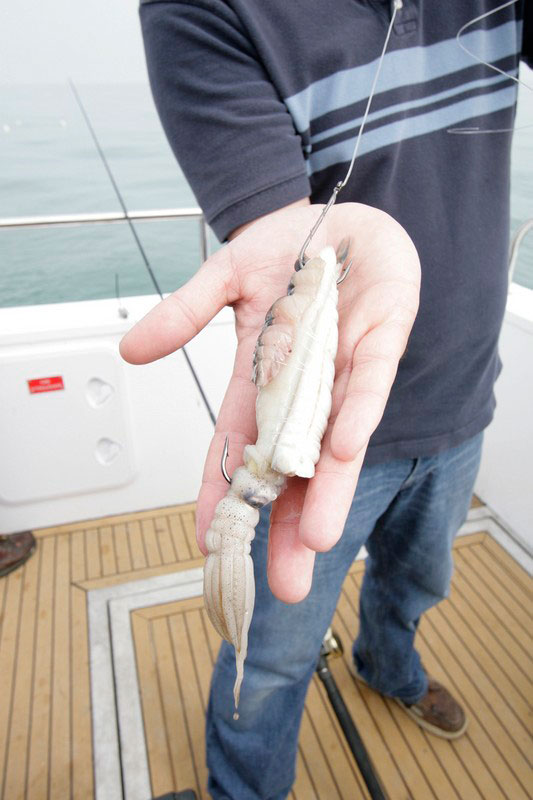 Good weather and small tides saw other skippers with similar plans departing the western end of the Solent along with us. There was a varied selection of frozen baits onboard, including squid, mackerel and launce. Malcolm had also dug some ragworm and there was also another frozen bait that would prove successful – more on that later. End tackle was pretty standard stuff with most of those aboard opting for a 4 foot trace of 80-100lb mono with pennel rigged with 8/0 wide gape hooks. Everyone opted for down-tide tactics at the beginning except for me… I would campaign my trusty Abu Conolon uptider and a thirty year old Abu 7000.

My main reason for uptiding was an easy life, as the rod can more or less be left to its own fishing devices while I get on with the job of shooting pictures. The first fish were not long in coming. Unfortunately these were in the form of the dogfish, which matchmen relish but specimen hunters have no love for. Rocker John bent into the first ‘real’ fish which put a pleasant bend into the TDR rod. John has been absent from boat angling for a while and braid was a completely new concept to him. The forgiving nature of the Daiwa backed up by the smooth drag of the Saltist easily compensated for the braid’s lack of stretch in the hands of someone not used to it. No mistakes were made, and soon a little blonde of around 8lb was in the net. No monster, but proof positive of the availability of the target species.

John’s fish had taken squid and that seemed to be the most popular bait in use. I had opted for a launce/squid cocktail and was pleased to see the tip of the uptider bounce around as something showed interest. I gave it plenty of time and then, after the lead broke out, reeled down to what was hopefully a big blonde. Once I made contact, the mighty bend in the rod betrayed a considerable fish. 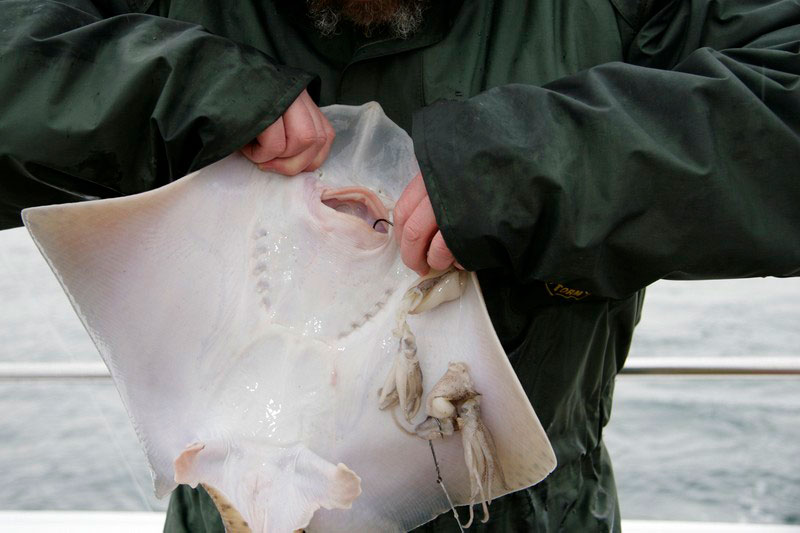 The uptider was easily capable of applying the pressure to get what was a sure ray clear of the seabed and on it way to the surface. That said, it still took a while to finally get the fish to the net as it used all of the tide flow to its advantage. It went 18lb on Greg’s scales, and was to prove both the biggest of the trip as well as my only blonde. I might add that I had a lumi muppet and a Booby bead on the rig.

A gaggle of blondes 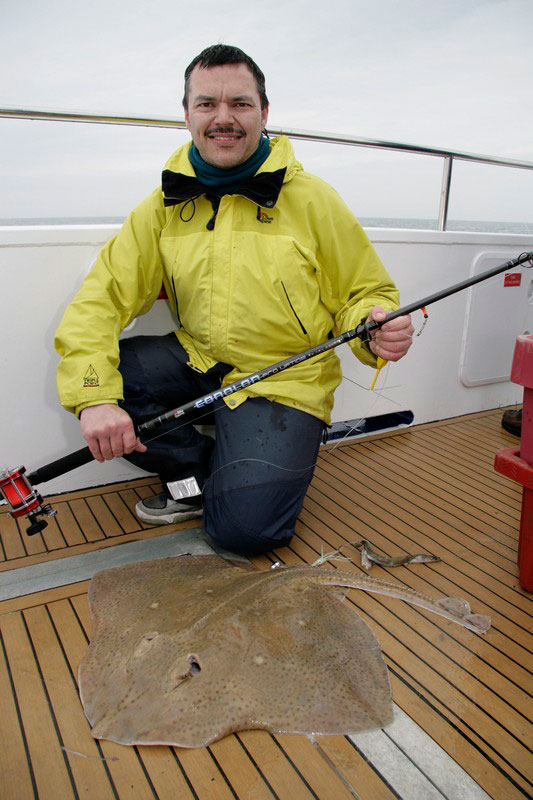 News came over the radio that Jane Hopkins had just had a 20lb fish aboard Vernon’s boat a few hundred yards away, everyone had the buzz. Malcolm, who was now also using an uptider, was next in. The ray came to the surface after a good struggle only to throw the hook 20 yards from the boat. Unfortunately for Malcolm that fish looked like it would have been the biggest. Not deterred, he was back down again and into another blonde almost immediately. No problems this time and it was soon netted. It wasn’t as big as the escapee, but well big enough as far as Malcolm was concerned.

The tide had now started to slacken and Milo tried the mystery bait I alluded to earlier – Ammo prawns. Both he and I had gone separately into Scotties tackle shop on the Isle of Wight and both of us had decided to try these extremely good looking baits. The fact that shop manager Alan ‘Superbeard’ Bravery assured us we could eat them if they didn’t work had no bearing in the decision process I am sure. Milo put one on despite much barracking from Rob Thompson who, though also a charter skipper, was acting as cabin boy for the day. A wrenching bite came within a minute of the lead hitting the seabed. Milo was right on the money, timing his strike perfectly, the culprit was soon on its way up. It proved to be a small smoothhound.

On went another prawn and the process was repeated again just as quickly. Everyone was now scrabbling for prawns and the bites came quickly. Unfortunately, many were missed but it was Kev Mardell who managed to boat the day’s best hound. There followed some serious brain-storming the ultimate blonde ray bait. It was decided that a three-way cocktail of launce, mackerel and squid would take some beating. John Haskett quickly practised what the group preached and was soon rewarded with another good blonde. Milo and Kev also followed suit with further blondes to their credit. 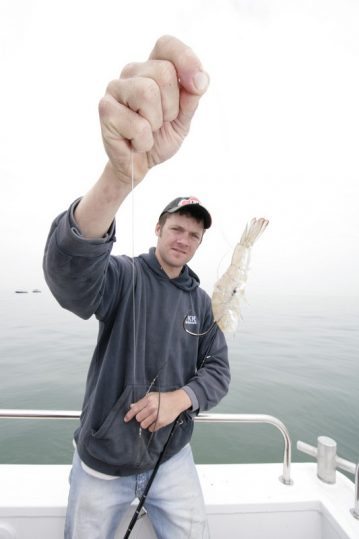 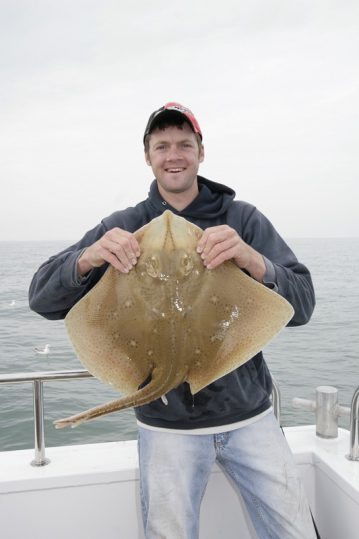 With an excellent day drawing to an end, we were all starving and Rob was put to work cooking up some bacon. Motoring back to port, we reflected on a magic day, and also one when all fish caught were returned fitting fit. 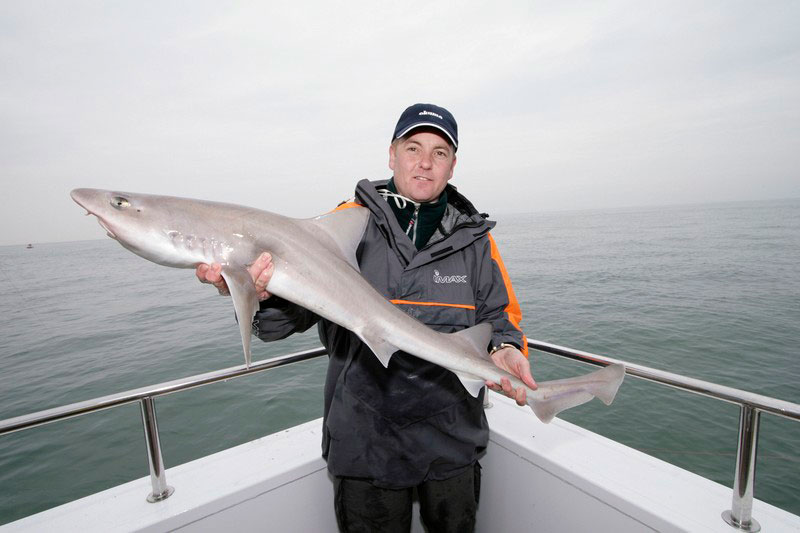