Skate on a plate

A true lover of sport and all things fishing, Nigel Botherway is probably best described as a globetrotting big fish hunter and top all-round freshwater specimen angler. A freelance rugby correspondent for various national publications and regular Sky Television and Talk Sport radio broadcaster, he is also a mini rugby coach at London Irish RFC. Nigel lists a 500lb sturgeon caught from the Columbia River in Oregon, an 88lb Indian Mahseer, and 135lb catfish taken in Kazakhstan among his more impressive freshwater conquests, but to date Nigel’s biggest British sea fish was a tope of around 35lb. 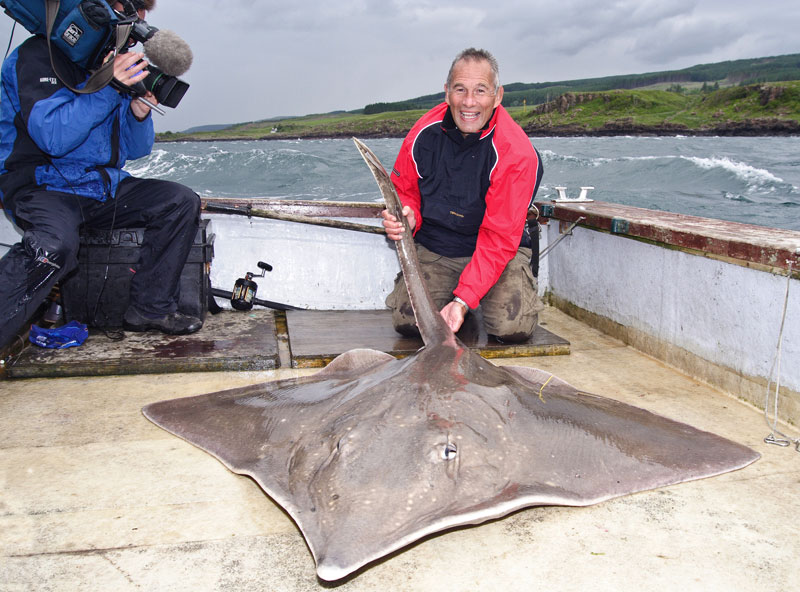 When the producer of the Tight Lines programme, which goes out weekly on Sky Sports, asked me if I could help Nige find and catch his first common skate, I agreed but privately fretted. Not because it wasn’t achievable, but because there are absolutely no guarantees in this fickle game. Odds have an awful habit of stacking against you when tied to a date of the production company’s choosing, and we were.

Skate fishing has everything to do with location. Venue selection and the availability of a good boat were the first and most important considerations. The obvious choice would have been the Argyle port of Oban, but the Firth of Lorne area has been well covered recently and the gambler in me was keen to give a more northerly venue an airing. Loch Aline opens into the Sound of Mull and is an unsung hotbed of huge skate opportunity. And, I knew just the boat. 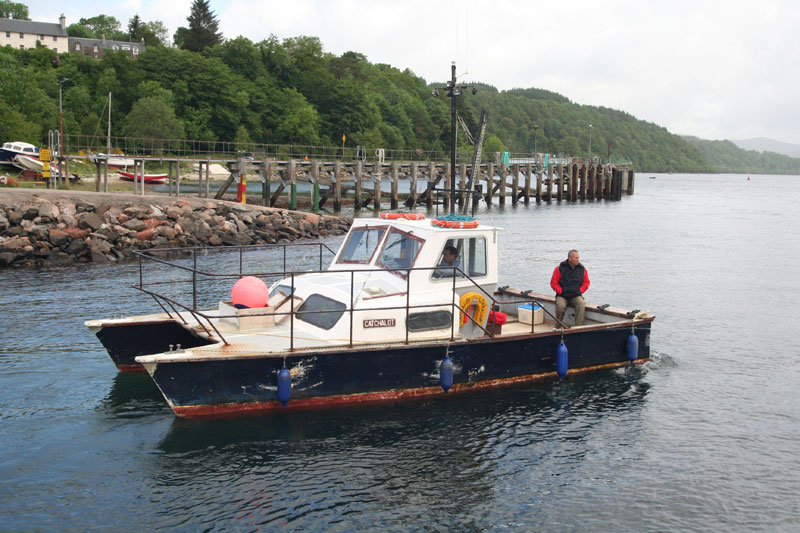 This was to be a three-man operation with my good friend and top Scottish skate angler Davy Holt completing our trio. Davy berths his famous boat ‘Catchalot’ at Loch Aline and offered to act as our skipper and guide. To any unfamiliar with Davy’s exploits, he is the best read and most consistent common skate angler that I know. This quiet, unassuming man has caught and safely released more huge common skate than anyone else in the country. Several of those have topped 200 lb, and he is so consumed with the specie, its everyday wellbeing and long term sustainability that the word obsession doesn’t even begin to cover it.

Once a research boat belonging to Glasgow University, Catchalot was in a severe state of disrepair when Davy discovered and rescued her from dereliction. The bare catamaran hull had lain forgotten and forlorn in a local boat yard for years, and required massive attention to return her to seaworthiness. Davy is a self-confessed recycler and happily admits there are more bits and bolts from old cars in this boat than you would believe. She is powered by two Ford Mondeo 1.8 litre engines and even the window-wipers used to belong to a Ford Sierra! A real labour of love, this is a craft of unique character and charm with a big fish track record that no-one can argue with.

A 10-hour drive from London the previous day hadn’t dampened Nigel’s enthusiasm. Like a child tripping on excitement he was first at the breakfast table and first on the boat. With introductions made and film crew aboard we got underway. A brisk south easterly breeze whistled directly up the Mull Sound limiting our options. Davy explained that although the weather was against us and the conditions challenging, all was not lost. Plan B was to drop anchor only 10 minutes distant, just a few hundred yards off the old west pier. Although we would be in full sight of the shore, the frightening thing was we would also be sat in upwards of 300 feet of water. 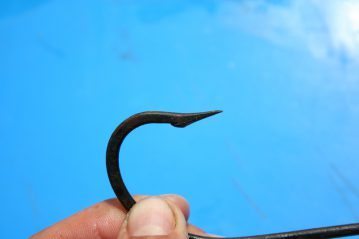 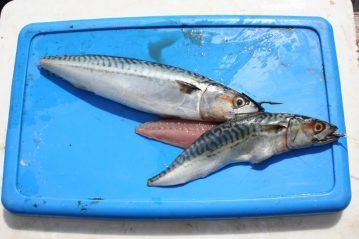 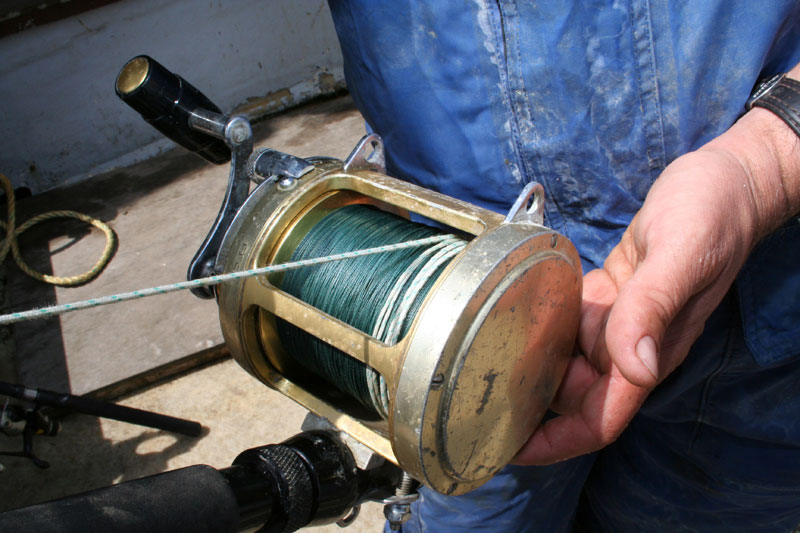 As Davy positioned the boat to his liking, Nigel and I set about baiting four meaty 80 lb class set-ups with double mackerel baits, formed of one good sized whole fish with the tail removed, and a blood-leaching flapper. The idea is to present a sizable mouthful packed full of scent, and to mount the bait so that it doesn’t spin and tangle on its way to the seabed. The rig was simply a short length of 250 lb mono crimped to a 12/0 hook with the barb squashed down. All four rods were strung across the wide stern.

Ardtornish Point to the immediate south served to deflect the worst of the wind, affording us comfortable fishing despite the surface chop. The substantial wreck of an old coal boat lay 50 yards astern of our position. As is so often the case, the first 45 minutes were uneventful with just a couple of small dogfish for distraction. But, with the scent trail from the baits now firmly established, things began to happen. This particular wreck is well populated with modest conger eels, another fish that Nigel was incidentally keen to score off his species wish-list. The baits were likely to draw them from their hidey-holes sooner or later, but the size of snack was always going to make hooking one difficult. 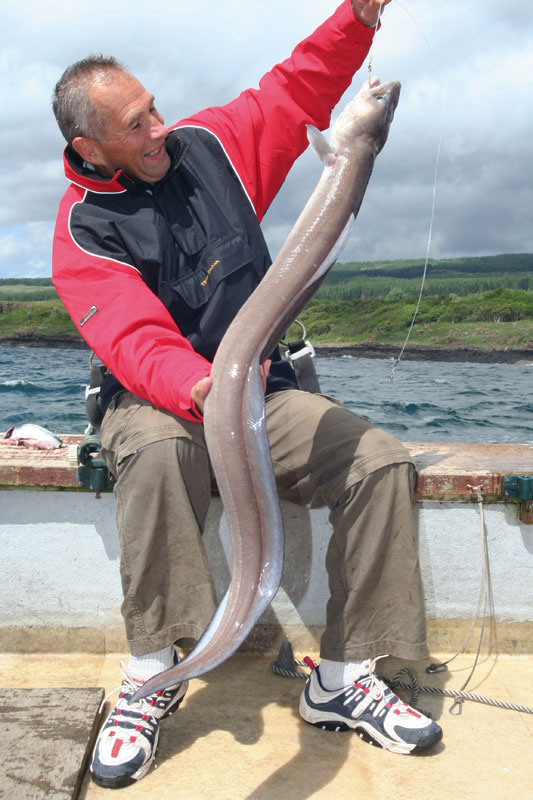 Several clonking bites came to nothing as the interloping snakes missed the hooks. I couldn’t resist sending down one much smaller mackerel bait. Almost immediately an eel latched on. Nige takes advice on board in an instant, and wound down fast before lifting into the weight of typical area conger. It was a one-sided battle on the heavy tackle, but the depth still makes playing any fish hard work…something evidenced on Nige’s face. The irate eel rolled on the surface. Davy grabbed the leader and swung it into the clutches of a chuffed angler. At around 15lb it wasn’t huge, but it was a good start.

Skate fishing is a waiting game and seldom all action. I am not blessed with bags of patience and was typically fidgety during two static hours that followed. Then, without preamble, the left-hand rod pulled over hard. Skipper, Davy was on it like a shot, detaching the retaining lanyard and clearing it from the holder without panic. But there was nothing there. If a fish had picked up the bait, it had dropped it instantly.

Twice more in the next 20 minutes a certain skate came and went, each time to a different rod. Three pairs of attentive eyes flitted from rod to rod in a nerve-jangling game of ‘Enny, meany, miny, mo’. Davy was confused, I was annoyed, Nigel was a picture of calm. For this amount of skate activity not to result in a hook-up is unusual, leading us to speculate that a large fish may have been working well up off the bottom and come into contact with the lines. The baits needed to be checked and changed. Two lines were wound in: the mackerel was gone on one, while the other bait was squashed flat. I was debating suspending a bait maybe 30 feet up off the bottom when the left-hand rod went again. It slammed over twice, jarring forward and halting only as the safety cord attached to the reel pulled taught. Davy wrested the tackle free and passed the rod to Nigel.

Steady As She Goes

For half-an-hour the fish stayed within touching distance of the bottom and didn’t give an inch. To put pressure on at this early stage is so often fatal, but Nigel knows big fish and didn’t have to be told to take it nice and easy. The reel’s drag was checked and adjusted several times to match the fish’s movements. Davy and I played to the cameras, gently ribbing Nigel with offers of cups of tea and biscuits. But joking aside, we had eyes on the weather. Wind strength had increased and the fishing conditions had deteriorated. To complicate matters, the anchor had broken free and there was a real danger that Nigel’s fish could tow straight for the wreck. With the fish now 50 or 60 feet up in the water, Davy opted to untie the anchor and slowly tease ahead on the engines. 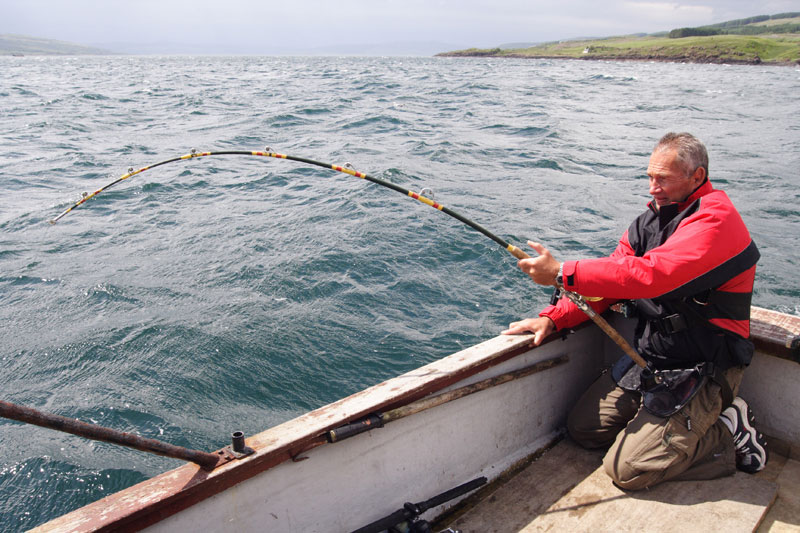 The skipper’s slow and persistent nudging eventually took us ahead of the dangerous wreckage. Holding the boat steady thereafter, demanded concentration that was no mean feat of seamanship in a roughening sea. Nigel is a big lad and a rocking boat is not something he is used to coping with. His fraught attention was divided between battling a giant and battling to stay upright! No good that. Improvising, Nigel opted to continue the fight on creaking knees.

It was 45 minutes before he really began to win back line; his pain as clear as his determination to best this fish. To those who have never experienced skate fishing, I often describe it as a brute force and endurance deal because it is so physically demanding, but there is more to it. Judging when to notch up drag pressure and when to allow the fish its head is not something easily taught or learnt overnight. Nigel, however, had masses of big fish experience to call upon and worked like a pro.

I Predict a Riot 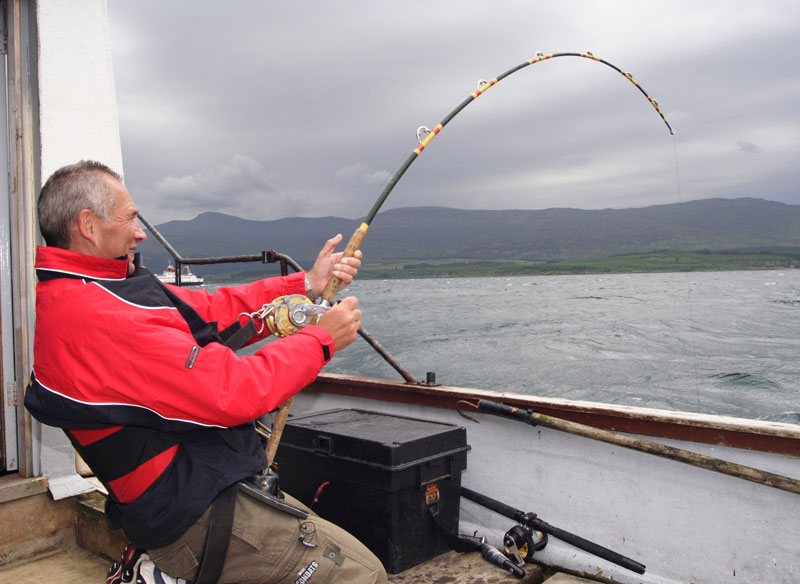 The fish was half-way to the surface when it rioted and Nigel let out a strangulated cry. It’s not every day that you see a genuine 80 lb class boat rod maxed out with line smoking from the reel. And from where I stood, it looked impressive. There was no doubt in my mind that this fish would weigh more than 150lb but I kept my mouth shut as that sort of statement normally cues catastrophe.

Much hard won line was back with the fish, but that roasting dive proved a final defiance. Back on his feet, line was coming easier now. Nige upped the ante, pumping the rod and working the reel like someone who’d done it before. We were well past the hour mark when the leader finally appeared. Davy stood ready with gaff, tape-measure and tagging kit. I saw a dark shape glide into view some 20 feet down… and it was a cracker.

With the brute flapping on the surface, Nige edged back a step as Davy ducked in and expertly nipped the gaff into the edge of the wing. Davy and I combined to grapple the fish safely inboard. Breathing heavily, an exhausted Nigel could only stand back and grin. The slog was over; we had delivered on a tough challenge. Nigel had his skate, Sky had their film, while Davy and I had relief written all over our delighted faces.

A very thick-bodied female skate measuring 85 inches from nose to tail, with a wingspan of 66 inches looked up at us. The vital statistics cut an impressive 188lb on the plotter devised by the clever people at Glasgow Museum. Later checking would reveal updated charts had the stats panning out at 196lb. Very well done that man! 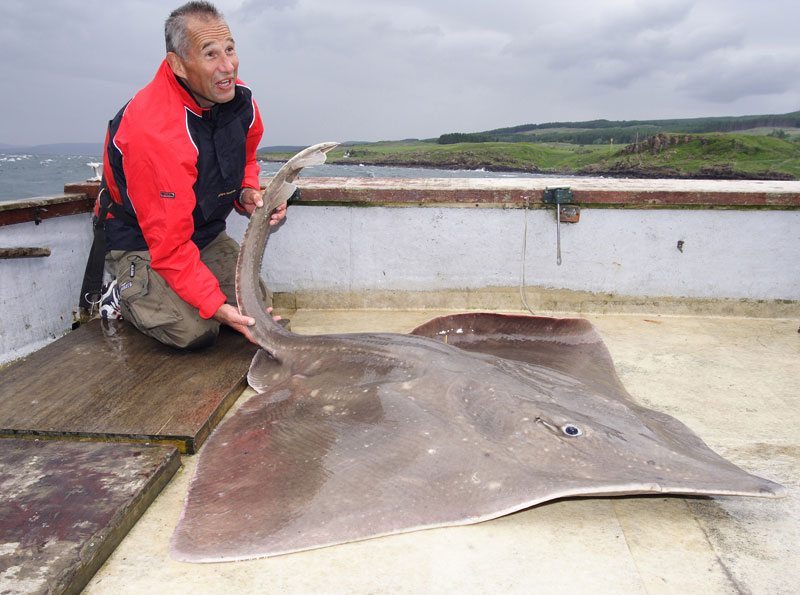 The big lady was already tagged. Davy recorded the tag number as Nigel planted a smacker on her ample cheek. Pictures quickly done, the beauty was lifted and slipped safely back. She stilled briefly just below the surface, big eyes staring back before mighty wings flapped, propelling her down and out of sight.

Back in the hotel bar, Nige confessed that Davy’s mantra: “Skate fishing is a marathon, not a sprint”, had rung in his ears like a torturous gong from start to finish. It’s a good call, and advice I might do well to heed when roles reverse later this year and top bloke Nige is guiding me to my first barbel.