Not long ago we all thought that the North Sea was almost devoid of cod! However, just recently there has been a huge increase in the number of cod caught on the inshore reefs – on shads!

Whitby earned the title of ‘Cod Mecca of the UK’ many years ago, and there have been some tremendous catches of the species in the past. Back in the good old days hoards of anglers would line up along the quay with their 50lb-class rods in one hand and a bucketful of pirks and muppets in the other. Not so today!

Many Whitby charter boats have discovered good stocks of cod in the 3lb to 15lb range just a few miles from the harbour. And, what is more, they’re prime targets for fishing with artificial eels, jellyworms and little rubber fish called shads. 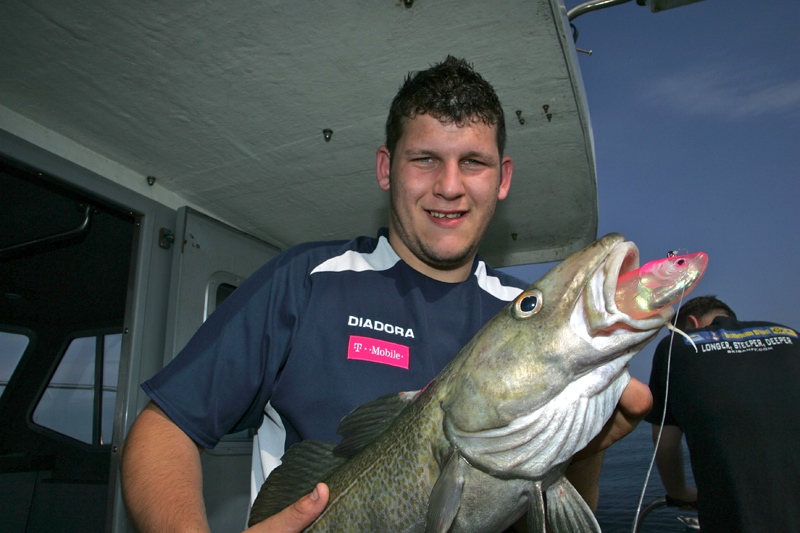 Charter skipper Paul Kilpatrick is an avid angler himself, and he will be the first to admit that this style of fishing involves the use of relatively light gear – compared to what used to be used out of Whitby. Although you’re still fishing in water than can be up to 180-feet deep, most of the fishing is done in around 100-feet, and with 30lb braid you can easily get away with eight or ten ounces of lead, even on the biggest tides.

I use a fixed spool reel for this style of fishing, because I feel it gives me better control. I can get my shad to the seabed in an instant and pick it up again. I also enjoy using a fixed spool on lighter rods, but that’s just a personal preference. Braid is the way forward for this type of fishing, and anything in the 25lb to 50lb bracket will suffice, but make sure you tie on a shock-leader of 50lb mono to absorb the powerful lunges a hooked cod will make. As a general rule this should be about twice the length of the rod you are using. 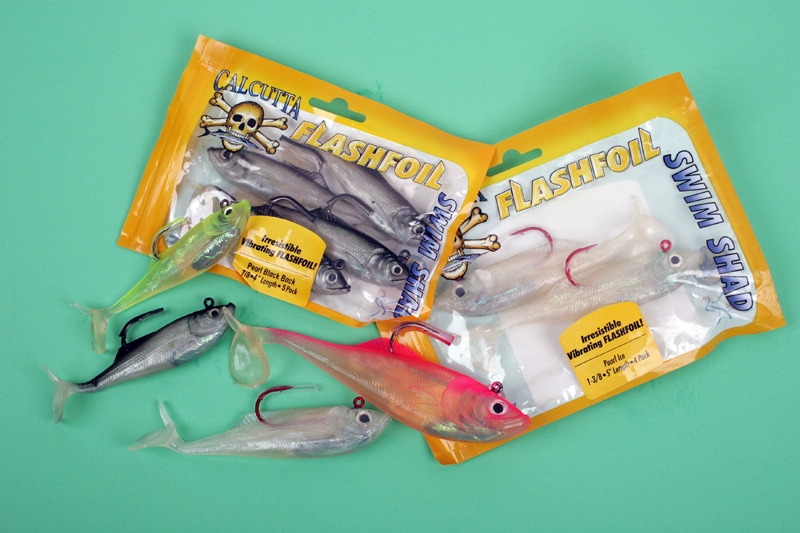 Because most of the cod are being caught on shads, you’ll need to take a good selection with you. Paul advised me that the hot colours are black and pearl, green, yellow and orange. Paul reckons the 4-inch shads work far better than the larger ones, and judging by his fishing performance on this trip I definitely won’t disagree with him!

I know we’re talking inshore cod fishing here, but it really is worth taking a few chrome pirks with you – there are a lot of decent ling to be caught inshore too. A baited pirk or just a plain baited trace is the way to catch these fish, and Paul will advise you if there are ling present when you book a trip with him.

Most shads – even the largest 6-inchers – weigh just short of 3oz, while rubber eels and jellyworms weigh next to nothing. So, you’ll need to fish them on a running boom rig. Simply thread a plastic boom onto your main line or leader, then thread on a bead and tie on a swivel. Now tie a 6ft to 10ft length of 30lb clear mono (fluorocarbon is best) to the other end of the swivel and attach your lure. You can change the amount of lead needed on the boom to get your gear to the bottom as the tide increases or decreases. 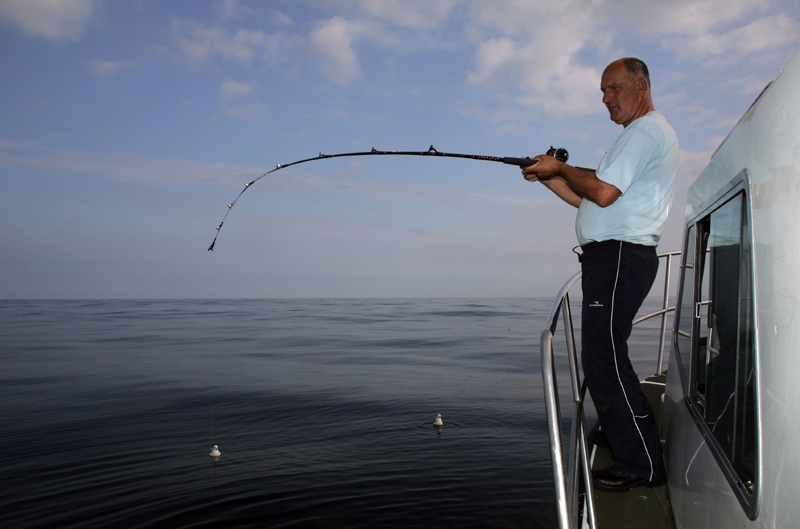 Fishing a shad or any other artificial lure is really quite simple. All you need to do is drop the rig and lure down to the seabed once the skipper stops the boat, then begin a slow but steady retrieve. Wind the lure up say thirty or so turns, then drop it straight back down to the bottom and repeat the process.

There are things you can do to help increase your chances if you’re not catching. Try winding up for just 20 turns if the fish are hard on the bottom, or experiment with different colour lures. Another thing you can do to help get more takes is to vary the speed of your retrieve. Start slowly, then increase the speed that you turn the reel handle, again dropping the lure back to the seabed after 30 or 40 turns. Sometimes this increased speed can get an extra take or two.

Perhaps the most important thing to know when fishing with soft rubber lures is ‘Don’t strike!’ It’s so easy to lift the rod sharply as a natural reaction when you feel the first pluck on the lure – doing this will simply pull the lure out of the fishes mouth. What you need to do is keep retrieving at the same rate until the fish hooks itself. It sounds simple, but believe me the temptation to strike often overcomes anglers in this situation! 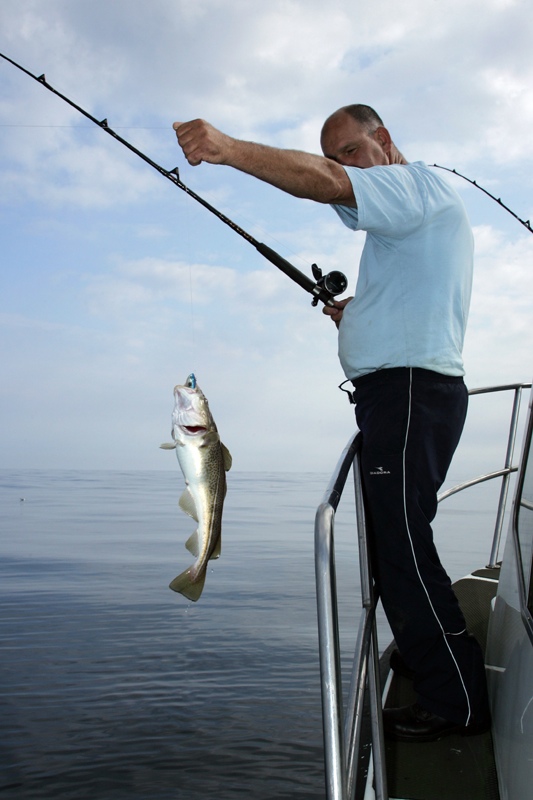 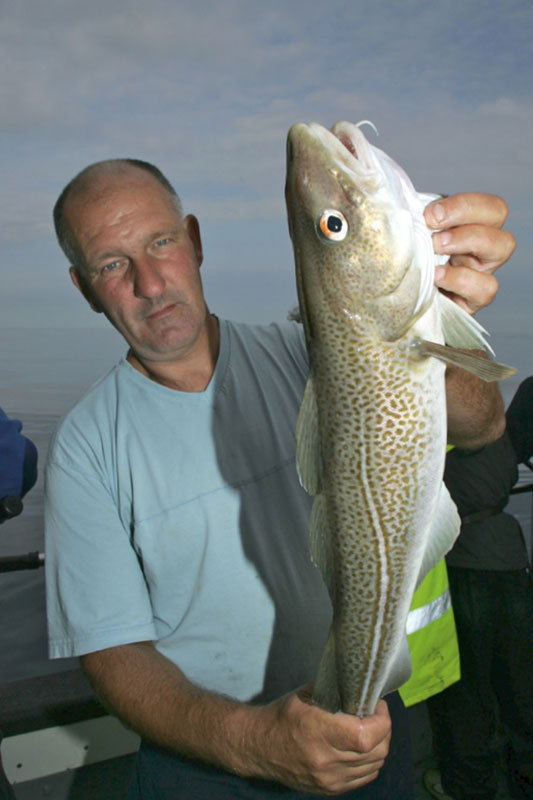 The boat I fished on out of Whitby for this feature is ‘Sea Otter II’, owned and skippered by Paul Kilpatrick. She’s a 33ft Lochin, which, as many of you will know, is a boat that has been well and truly tested over the years – they’re renowned for their stability and safety. She’s got a 420hp Caterpillar engine under the deck, which gives her the ability to cruise long distances in short spaces of time, with a top speed in excess of 20-knots.

Paul Kilpatrick has been a charter skipper for 27 years, and he loves his fishing (as you can see from this feature!) Not only is he a very competent boat angler, he’s very good from the shore too – so if you book a couple of days and you get winded off, he will be able to put you onto the best shore fishing the area has to offer.