The Faroe Islands and in particular the town of Vestmanna, provide the perfect backdrop for the sea angler who wants to target huge, red spotted plaice. The local charter skipper Magni Blástein has spent the last few years establishing the best all weather marks to locate these distinctly marked flatfish.

A trip to the Faroes in 2015 opened my eyes to the potential for this stunning venue to produce European record sized plaice with fish weighing over 4kg being landed and safely returned. Magni is aware of the value of this resource and ensures that the giant plaice are carefully weighed, measured and returned. 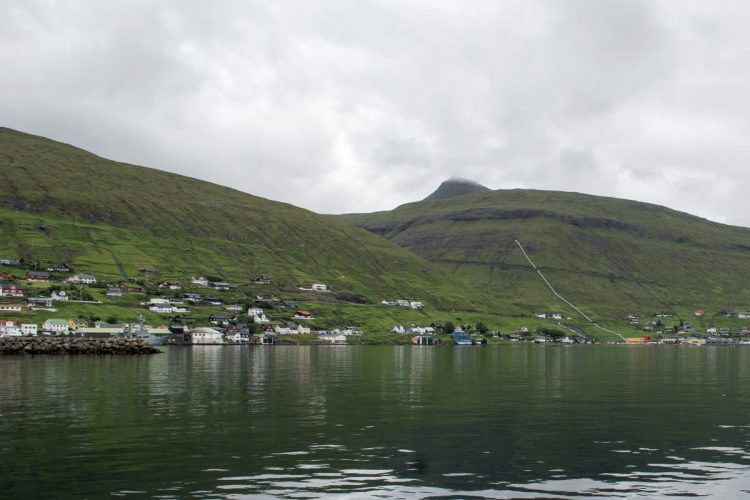 The main mark is a mere ten-minute steam out from the boat’s pontoon berth, where the skipper has a base on shore with bait, tackle and waterproof clothing for the use of visiting anglers.

The gear provided means that the anglers travelling for a weekend session can easily keep their luggage within the 20kg permitted limits when flying from Edinburgh. The comfortable flight with the friendly and efficient Atlantic Airways lasts just over an hour. The skipper has reasonably priced long weekend packages which cover flights, transport, self-catering accommodation and two and a half days out on the boat. 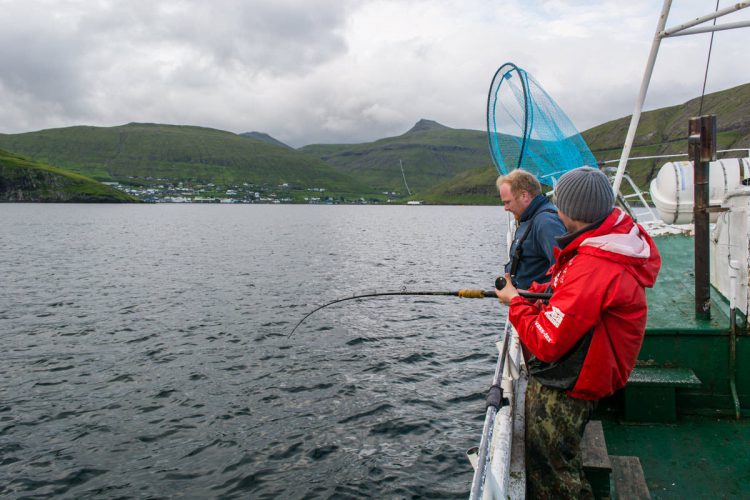 Scottish International angler Ally Campbell and I arranged a visit for 2016 to sample the general fishing and carry out some shore exploration, but more specifically to target some of those tempting European line class records which exist for the plaice. Unfortunately, being a largely US based organisation, the plaice does not feature on the International Federation of Game Anglers (IGFA) lists. After speaking to the skipper prior to the trip it was decided to target the big plaice in the evenings once his normal charter trips were completed. We would bring suitable light tackle and IGFA recognised line while Magni would suss out the best times and tides as well as supplying the required baits.

Fortunately, shallow water covers the chosen marks at the mouth of the short fjord in which Vestmanna nestles off the main Vagafjordur channel between the islands of Vagar and Streymoy, therefore light rods and small reels would be the order of the day. The plaice marks are surrounded on all sides by steep, grassy cliffs which provide shelter from all wind directions ensuring that a flatfish session should never be cancelled because of rough seas. 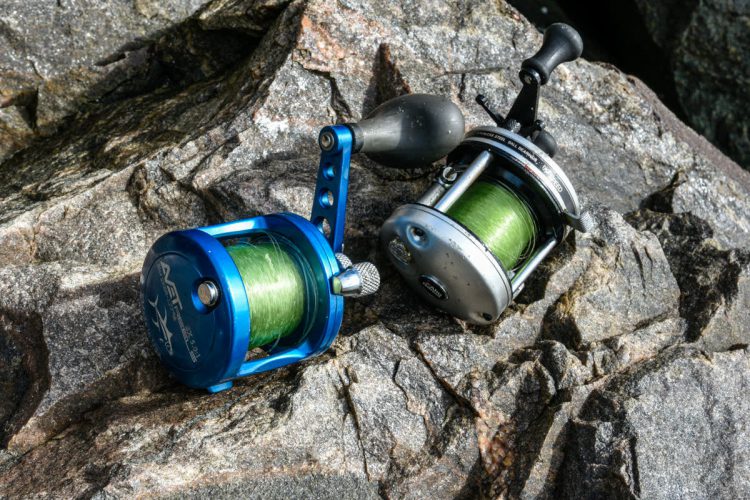 I packed an ABU 5500 loaded with 4kg / 8lb test ANDE Tournament line and a small, older model AVET SX filled with 6kg / 12lb line again from ANDE. It is not easy to location IGFA test line these days and indeed both the spools that I used to fill my reels had been languishing in my spare line box from previously fished EFSA European champion events. ANDE is one of the few available lines which are certified to break at the strains required for record purposes and can be found in the UK at Weymouth Angling Centre.

As the skipper has a suitable landing net I decided against the use of a leader, which can provide a weak spot in the lighter line classifications, and terminated the main line with a simple one metre length of double line formed using a spider hitch.

As a rod to compliment the small reels I chose to pack a 2.1 metre long Yuki Surume rod that I found in the Anjupesca shop while on holiday in Spain where it was ridiculously inexpensive. This rod has an extremely light tip which responds superbly to the dives and head shakes of a hooked fish while the stiffer lower half provides plenty of lift and allows leads of 150gms to be comfortably used.

One word of warning for those using a telescopic rod tube to travel. I would recommend that you enclose any fine rod tips in a secure bag or inner tube. To my cost I found that the fine tip on my Yuki rod was trapped in the contours of my Plano Bazuka rod tube and although it appeared undamaged after extraction the top one centimetre snapped off half way through the trip. Pliers removed the damaged section and allowed the rod to continue to function. 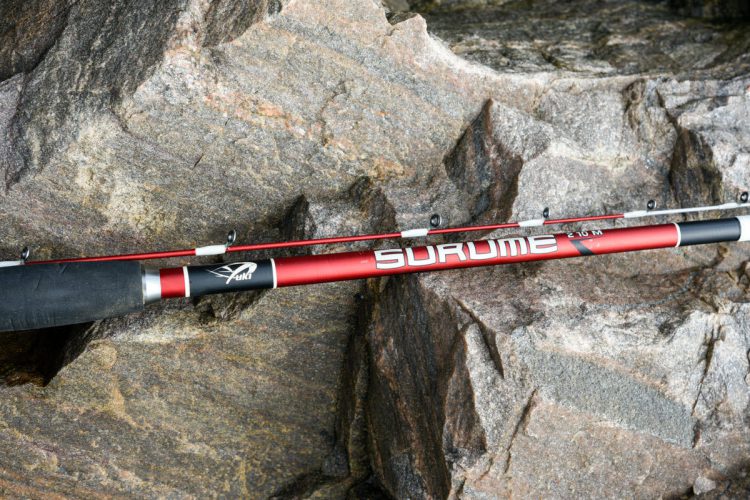 Any medium weight travel spinning rod with a responsive tip could also be used effectively for the typically shallow, clean ground marks that the Faroese plaice inhabit and can easily fit into a suitcase.

Although I have had success with the far north plaice when using long strings of beads simple tackle can be just as productive if not more so.

During our visit we kept the bling to a minimum with a spoon approximately 30cm from the hook, mine was made from stainless bandit while Ally used a hammered nickel, shop bought version. The spoons help ensure that the bait remains tight to the seabed as well as providing an attractive flash and stirring up the sand. Next to the hook we had either a small, pink, lumi SureCatch needlefish or a few beads. 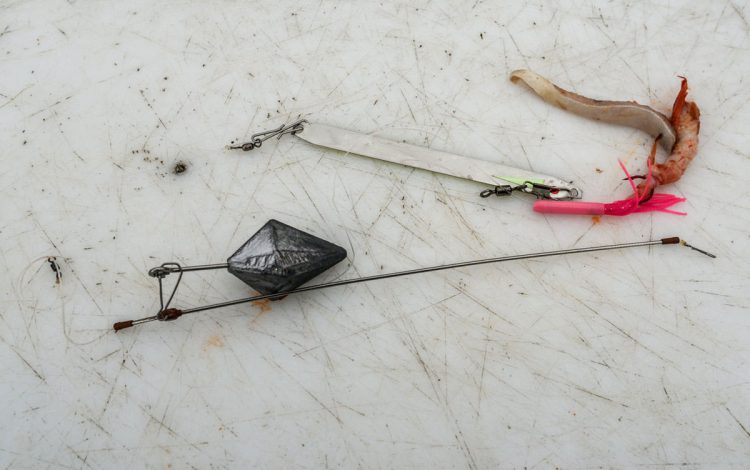 The longer strings of beads seemed to attract the hordes of hungry dabs, particularly on the faster drifts. 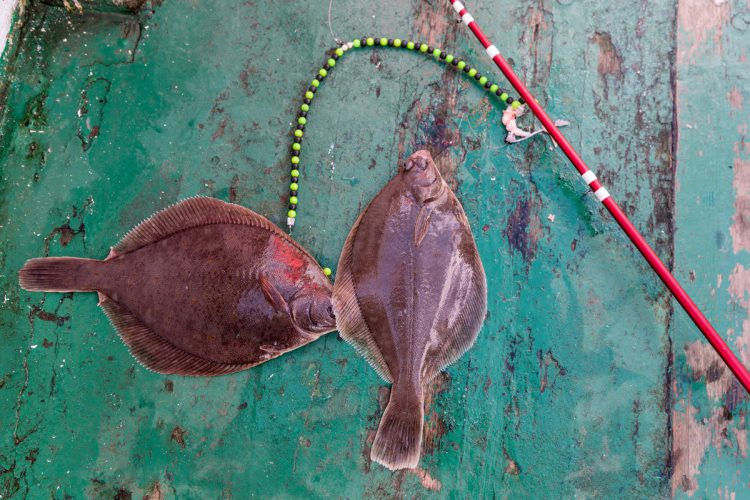 Ally used a 2/0 single hook but by using pennel rigged VMC Red Devil hooks I was able to rig a straight bait with no bait elastic. A single bait is all that is required for the plaice, multi-hook rigs tend to attract the inquisitive dabs which quickly destroy the carefully prepared baits.

The trace lengths were attached to a French boom in Ally’s case and to a free running narrow diameter tube boom on my rig. In each of the four plaice sessions the skipper made sure that the tide and wind combined produced drifts of less than one knot which allowed us to use weights of between 100 and 150gms.

The favoured plaice marks are sandy banks with very little chance of snagging so the fishing method is very simple, keep the baits hard on the bottom. If all the anglers are fishing from the one side of the boat, occasionally free lining the rig can help maintain contact with the seabed.

When you feel the first interest from the plaice, which is likely to be a gentle but solid knock as opposed to the rapid rattles of the dabs, it is advisable to give them a metre or so of line to allow them to take the bait. Despite their high average size they do have a comparatively small mouth.

The bait used was all supplied by the skipper other than some mackerel and sandeel that we feathered out during a trip as guests during the day. 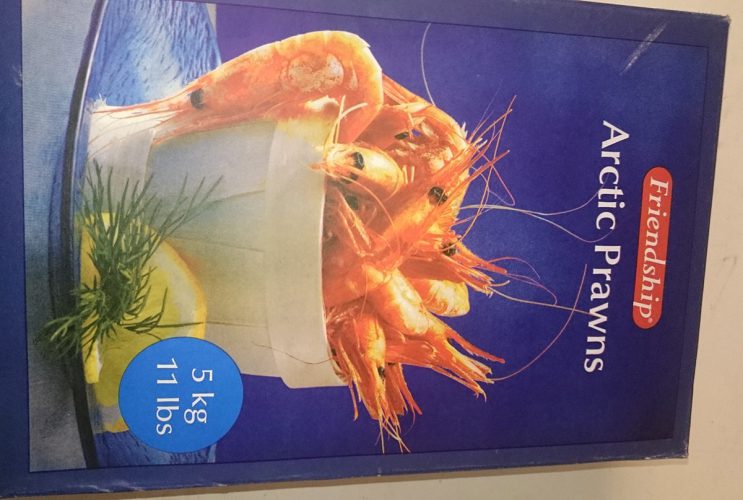 The favoured bait is cooked prawn which is shelled and whipped on to the hook to lie inline before tipping the hook with a thin strip of mackerel or sandeel. Magni also had a few boxes of large earthworms left by previous visitors to be used as an alternative to the fish strips for tipping.

The first couple of our early evening sessions produce only small plaice of under a kilo as hordes of hungry dabs decimated our carefully prepared baits. It was however, with anticipation that we headed out at 7pm on the Tuesday evening with assurances from Magni that both the tide and drift speed would provide perfect conditions for the red spots. 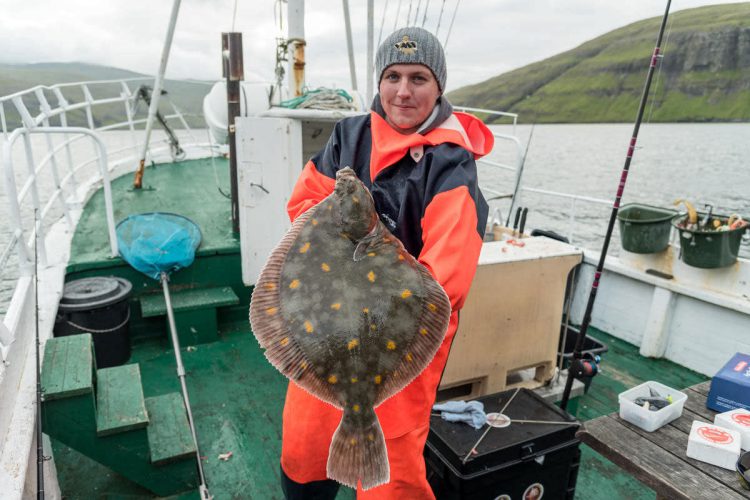 Three quarters of an hour into the outing Ally, using conventional gear with braid, bent into what was obviously a decent fish. As we had also had cod over the same mark it was several minutes before we relaxed to see the large, flat, brown shape deep down in the clear northern waters. Our first major success of the trip resulted in a cracking fish of 4.9kg being weighed, measured and returned.

Thirty minutes later my light tackle registered a small but substantial bite. Using the sensitive tipped rod and coupled with the springiness of the 4kg ANDE line meant that the normal braid transmitted thumps of large fish were ironed out. It was however obvious that this was a decent fish and the absence of the head shaking nods of the cod meant the culprit was liable to be a plaice.

Gentle lifts of the rod and slow retrieval of the line guided the fish up to mid-water before, as it realised that it was hooked, the fish dived back to the seabed streaming line from the small Ambassadeur reel under the control of the pre-set drag. Over the next ten minutes the fish repeated these powerful dives until Magni slipped the net under the biggest plaice I had ever seen, including those in the commercial markets. 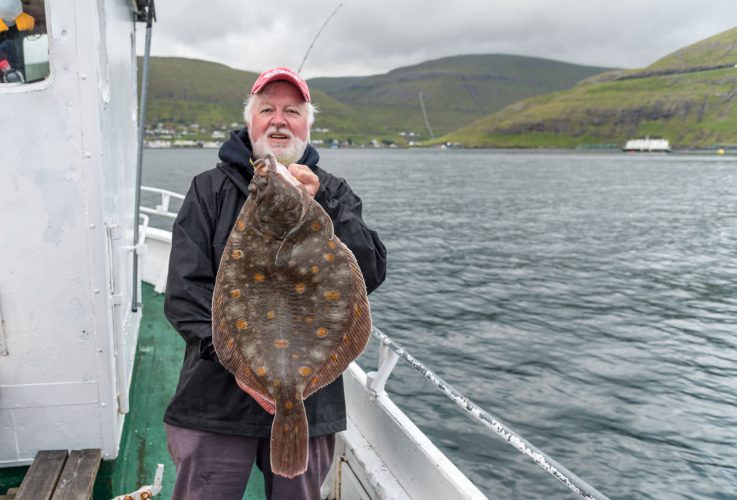 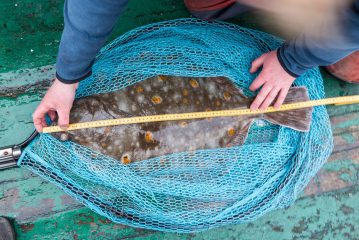 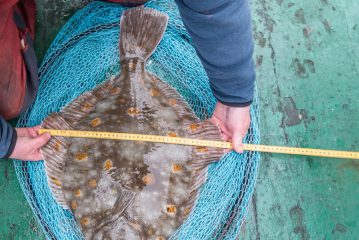 The 73cm long fish bumped the scales down to 5.4kg, doubling the existing 4kg line class record which stands at 2.8kg and beating the current All Tackle record of 5kg. A fish of a lifetime which certainly made my trip worthwhile.

As the IGFA and other record keeper require that the fish be weighed on land I decided against trying to keep the fish alive for the short trip back to harbour. The memories and the photographs were enough for me and the magnificent fish was returned to the sea.

Back at the Plaice Place

After another evening session which again produced only small plaice among the expected shoals of dabs, we decided to head out on the morning of our departure for one final crack at our target species. Once again “Magni’s pets” did not disappoint.

An hour into the session I lifted into what was obviously another good fish, having switched to the Avet spooled with the 6kg line this time. The extra confidence instilled by having used the lighter mono during the previous session was invaluable as I brought another enormous flatfish to the net. This one measured 64cm and weighed in at 3.4kg, enough to once again better the current European record for the 6kg line class. 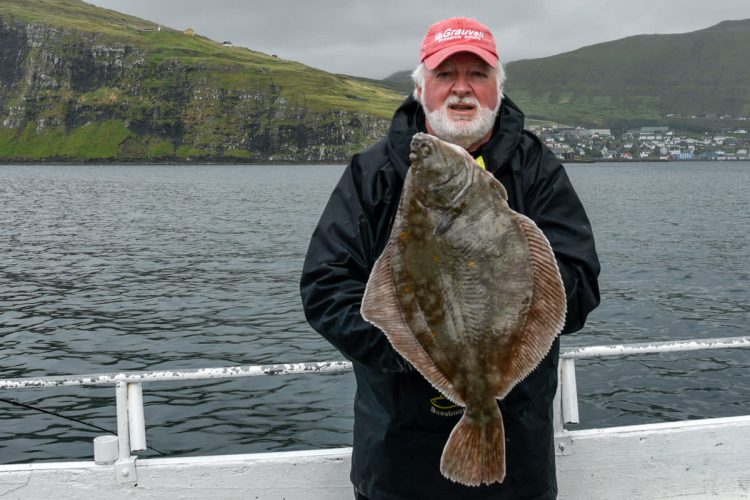 The boat, Blástein, has a large tank on board which can be kept topped up with fresh seawater. This allows the netted fish to be kept alive in comfort during the measuring process and allows the fish to be taken to the nearby berth for weighing prior to subsequent release. 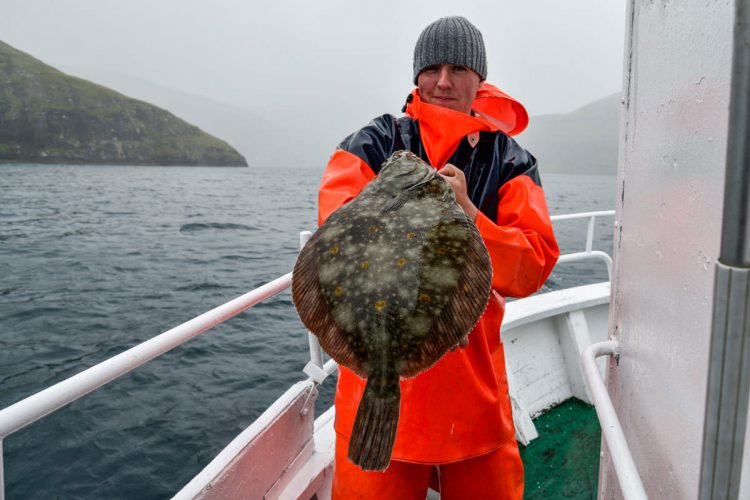 To round off our week, Ally landed another terrific plaice of 4kg on braid as we prepared to head for harbour and the end of a tremendous week in these picturesque, rugged islands whose residents, with and without gills, had made us feel more than welcome.

If you want to catch the plaice of a lifetime there is only one venue to visit and that is Vestmanna where Magni Blástein will do his utmost to ensure that his pets come out to play. Magni has spent several years locating the marks where these giant flatfish inhabit and he has a policy of returning all the big specimens unharmed, only allowing a few of the smaller fish to be retained for the table. Visiting anglers should always respect his wishes and return the fish after capturing some images of the catch. This coupled with the fact that there is no commercial pressure on the stocks will ensure that, for the foreseeable future, anglers will always be able to enjoy targeting these bin lid sized, red spotted beauties.