The waters around the Channel Island of Jersey are well known for the terrific variety of species available to boat anglers. Daniel Ferguson relates a typical early season day afloat off the south west coast of the island as water temperatures start to warm up.

With the forecast and tides looking great Anthony Marett and I formulated our game plan for the day and boarded the Orkney for a 7:30am start.

Our first plan was to stop off and drift over a few submerged heads, rocky peaks, to try and locate a bass. We gave it 20 minutes of fruitless, constant lure fishing before we then set out into slightly deeper water and found a spot that looked really bassy. Anthony had packed his lure rod away but I was straight into a nice bass and after a cracking fight he was in the net and weighed at 3½lb (54cm). While I was sorting the bass out and taking a few pictures Anthony had a few casts with my rod to try and could winkle out another, but with no success. 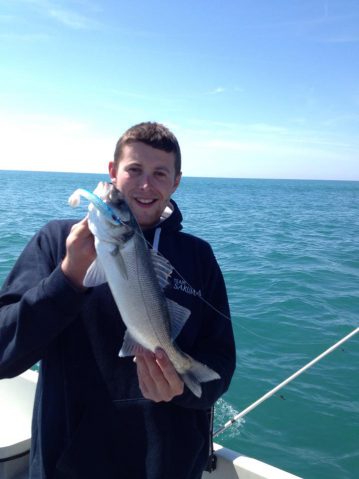 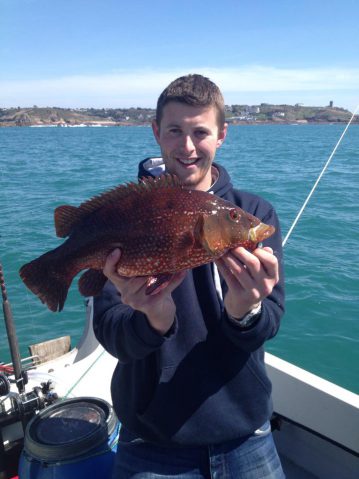 We decided we need some fresh bait if we wanted to catch some turbot and brill so our next move was out west around Jersey’s Corbiere lighthouse. The baitfish proved elusive and we decided to take a risk and head straight out to some sandbanks further west to see if we could find any there. There were around half a dozen boats on the banks drifting for turbot and brill already, and immediately we were into the bait we required. After catching around 20 mackerel and a few sandeel we began to drift the banks on the bottom for the big flatfish. Two disappointing hours later and despite drifting different locations, neither the turbot or the brill fancied our perfectly presented baits. We did managed ten plus whiting around the 2lb mark and a few dogfish but that was it for the clean ground. 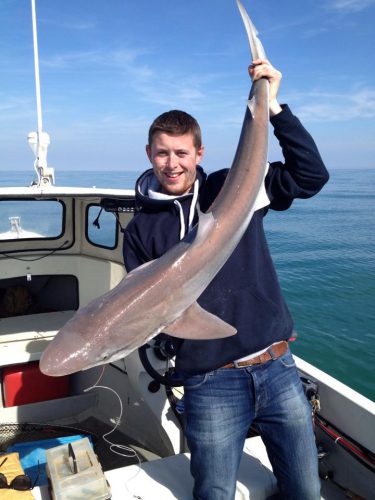 It was time to head back in shore for a bit more lure fishing while waiting for the tide to slacken to hit a reef for tope. Our first drift we didn’t manage a hit, but we moved into shallower water around 4.2 metres, 14 foot, deep with a few heads just underwater. Water was the clearest I had seen it all year which looked good for the lures. Anthony was answering an inopportune phone call as my second bass of the day hit my Red Gill lure, only a schoolie but still another bass. I then into hooked something pretty big, which I was sure was a beast of a wrasse but it bumped off after a short contact. I switched to a 4″ Bass Assassin lure and 12 gram jig head and bounced it along the sea bed to see if I could locate a few more wrasse lurking down among the rocks. First cast yet again, fish on, a nicely coloured ballan wrasse engulfed my lure. As we then carried on catching smaller wrasse the tide eased and it was time to shift to the tope grounds.

The sea had now calmed right down and the sun was shining we could not have picked a better day to be at sea. The anchor was dropped on the flat rock seabed and two bottom rods sent our baits down to where we hoped the streamlined members of the shark family would be lurking and we sat back to wait for the screaming reels. Anthony setup was an Ugly Stick rod coupled with a narrow spooled ABU Ambassadeur reel, he used a wire trace to his hook. I went with 200lb breaking strain Varivas mono for my hook length and my Daiwa 300H Sealine teamed up with a 3.3 metre long Cormon Blackbull rod, designed for catfish fish but great for tope.  My bait was the head half of a mackerel while Anthony took the flapper approach. Unfortunately the dogfish arrived first and made short work of our big tope baits even on our 8/0 Sakuma Manta Extra hooks. As our bait supply dwindled and the tide eased further Anthony’s reel to screamed off to the shouts of “Tope on”. His leader was just reaching his tip ring when a tope also picked up my bait and headed off at rate of knots. Double hook up, you can’t really get much better than this. Anthony managed to boat his on his own, and soon after was giving me a hand lifting mine aboard. I weighed mine at 27lb and as Anthony’s fish being slightly bigger we estimated his at 32lb and both were quickly returned after smiling photographs. We both had to change our rubbing leaders as the chaffing skin of the tope had made a mess of them up on their initial run. 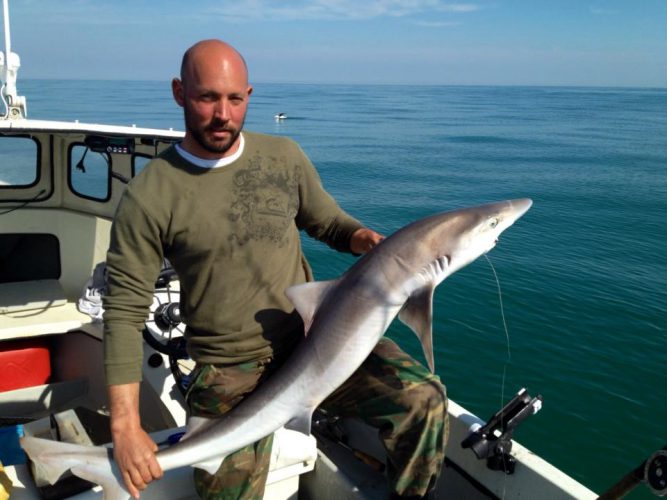 The tide had turned now and it was starting to become difficult to hold bottom. I decided on a change of tactics to try for a conger or bull huss and baited up my Sakuma Manta Extra with the head half of one of the fresh whiting caught earlier. It looked good to me and I was very confident that this bait would do the business. The terminal tackle was not long on the bottom before the rod tip indicated interest below. I allowed time for the bite to develop before lifting into what felt like a good fish. After a good scrap a fine huss with pristine markings surfaced. A scoop of the net and the muscle bound fish was ready for the scales where it weighed 12½lb and after a few pictures it was put back to fight another day. 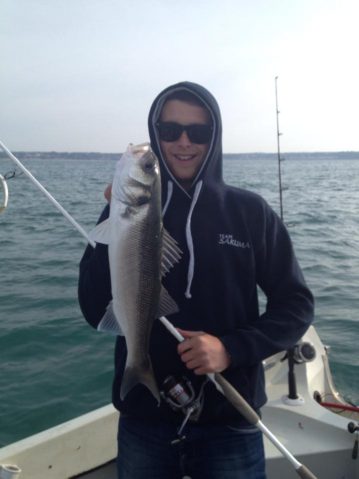 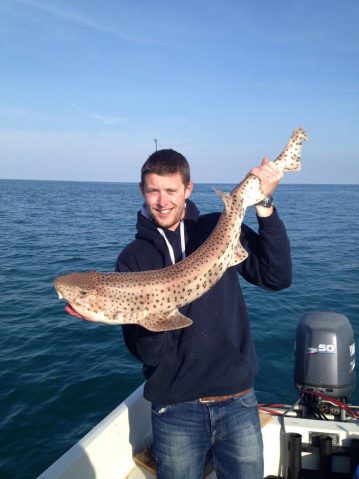 We called it a day and headed back to harbour, stopping for a quick lure bash over the rocks, where I wound up Anthony by catching a school bass to complete a three nil whitewash. We finally returned to port at 7:30 after a long, enjoyable and productive day off Jersey.